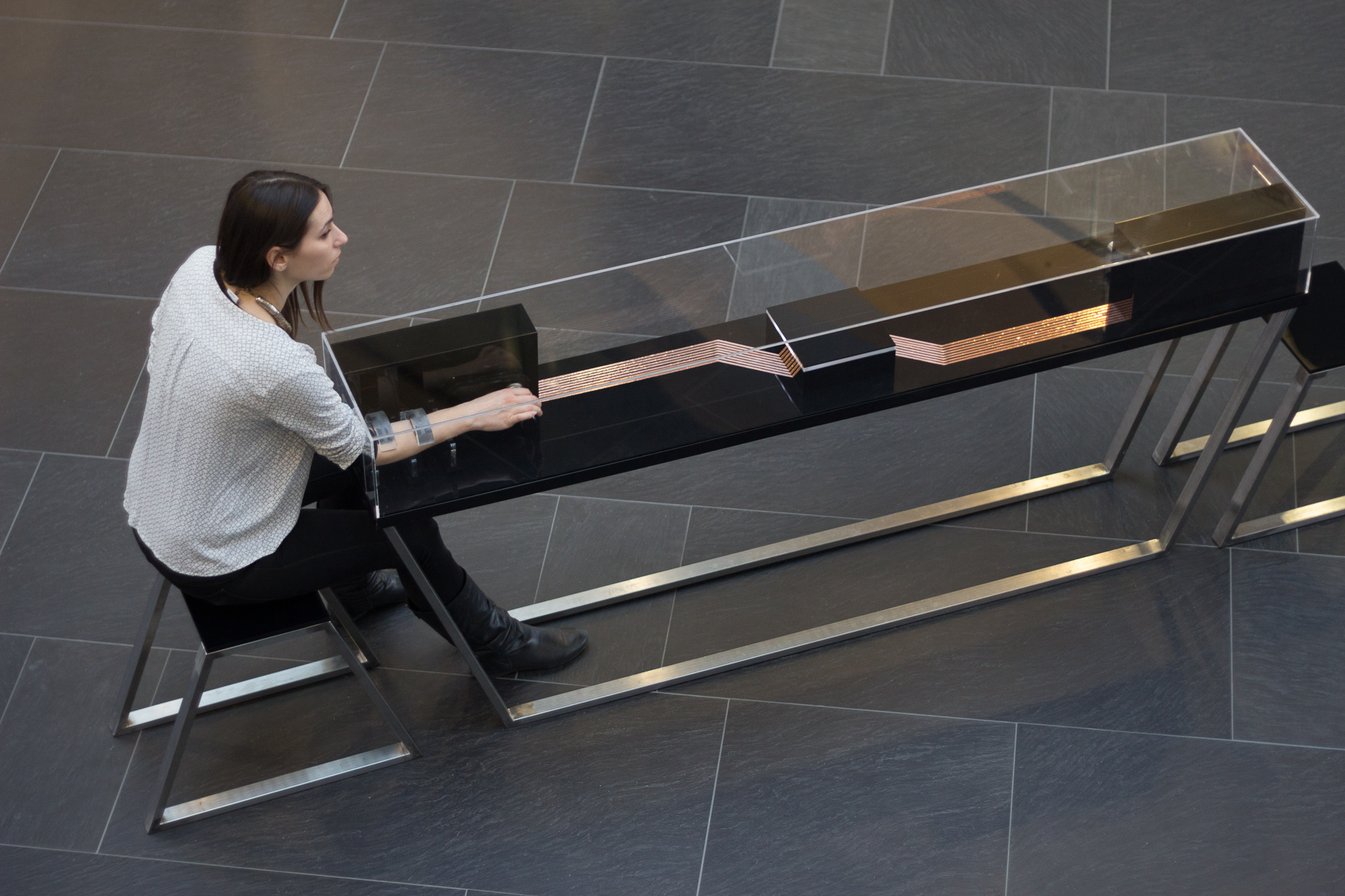 Hatched at the Human Computer Interaction Lab at the Hasso Plattner Institute (HPI) in Potsdam, Germany, Ad Infinitum is a “parasitical” machine that, quite literally, lives off of human-generated energy. Housed in a rectangular acrylic tube with crank mechanisms (plus seats) at each end, the ‘off the grid’ device latches onto any curious visitor who sits down and reaches in: grab one of the mechanism’s leavers and a pair of cuffs that double as electrodes will ‘trap’ your arm in place and stimulate your wrist muscles with small electrical jolts. As the muscles contract, you involuntarily crank the mechanism’s leaver, generating kinetic energy the machine (or rather its battery) feeds on. Keep cranking and the machine will pause the stimulation, let go and the tingling shocks return. This ‘ad infinitum’ energy cycle is only broken – and the visitor freed – when another visitor reaches for the opposite leaver, thereby becoming the new host. 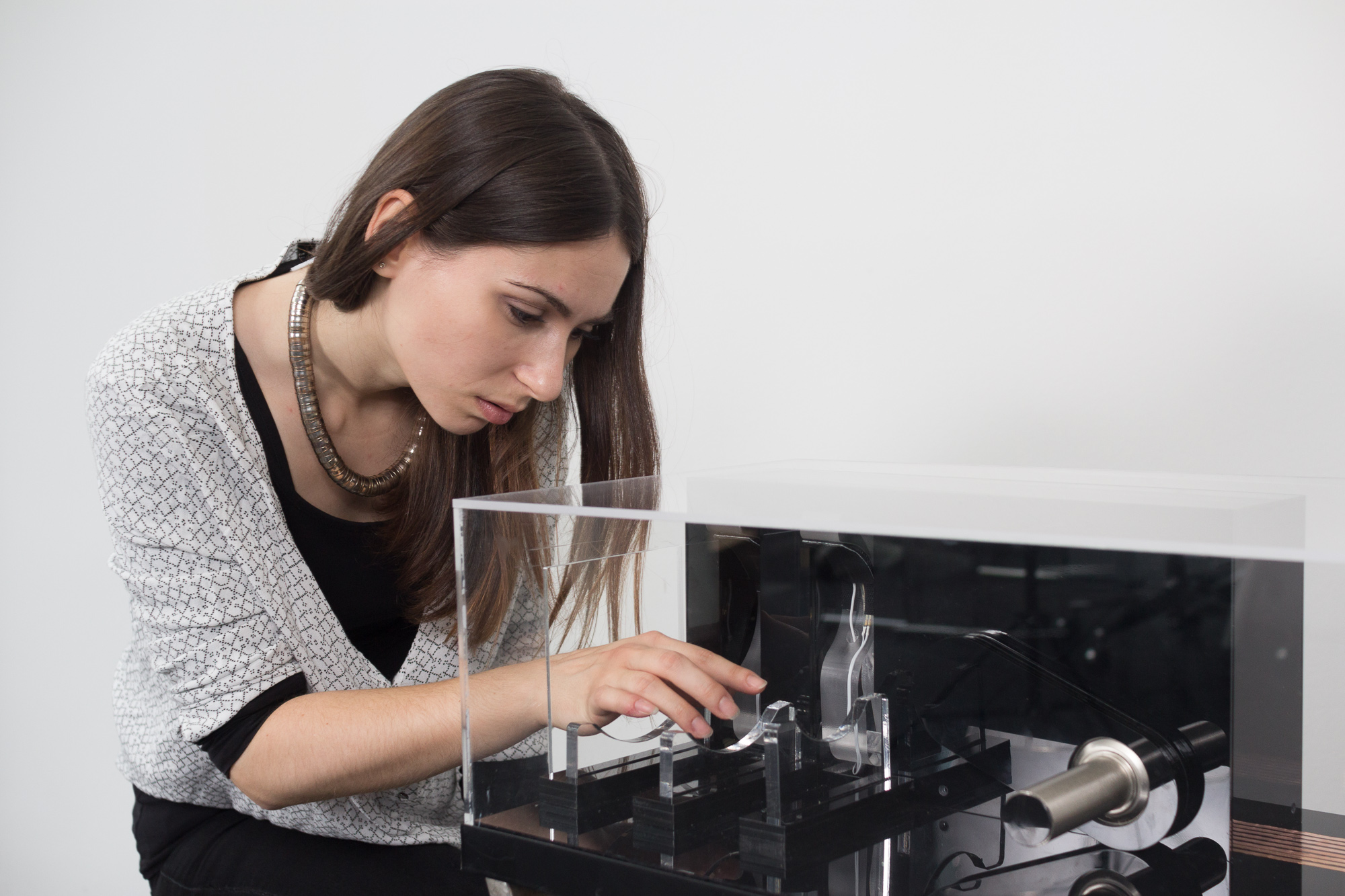 A collaboration between Pedro Lopes and fellow HPI researchers Alexandra Ion, Róbert Kovács, David Lindlbauer under the direction of professor Patrick Baudisch, Ad Infinitum is framed as a “machine on top of a human” and the uncanny experience – the shift from ‘being a user’ to ‘being used’ – as a deliberate irritation inspired by years of research: Baudisch’s Human Computer Interaction Lab has experimented with interactive systems based on electrical muscle stimulation (EMS) since 2013, yielding a number of interface prototypes that, for example, enhance VR experiences (Impacto simulates physical impact) or aid cognitive activities (Muscle Plotter assists drawing, as covered here on CAN). Ad Infinitum, the lab’s first ‘art project’, utilizes the produced knowledge and technologies to raise finer points: can we embrace (increasingly) smart systems and AI without relinquishing control? At what point do the machines we use begin to use us and, deployed in service of corporate agendas, aren’t they already? “The shock we feel in our muscles, the involuntary gesture, acknowledges our inherently complicated relationship with the technological realm around us.” 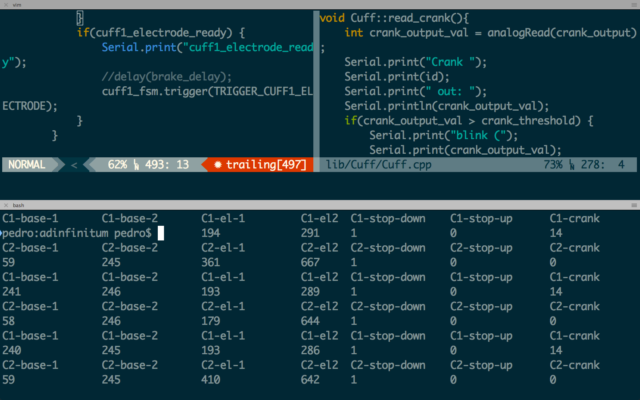 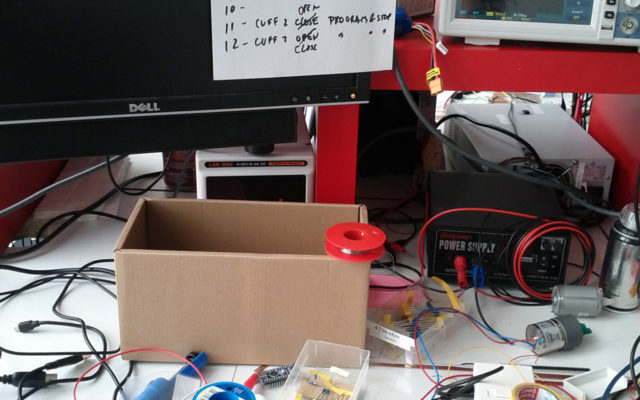 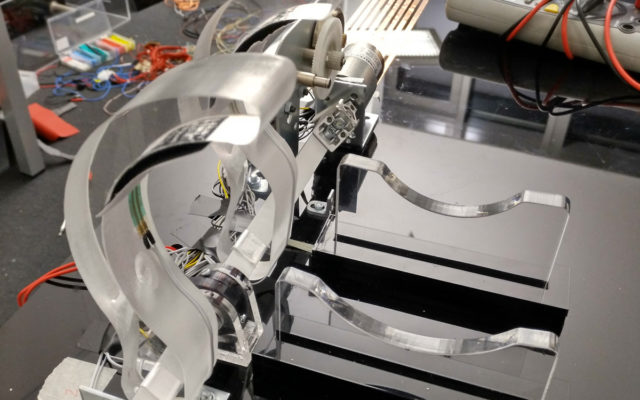 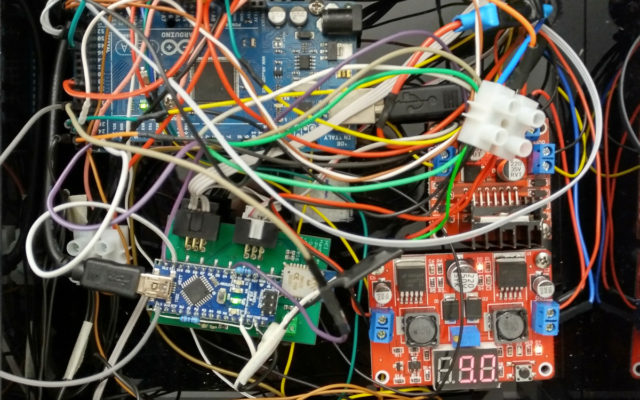 ↑ Ad Infinitum in the making (from left to right): Arduino debugging, the first and second prototypes

The parasite’s innards are “pretty simple,” Pedro Lopes tells CAN. Ad Infinitum’s nucleus – a ‘black box’ that sits at the centre of the CNC-milled acrylic case – contains an Arduino MEGA, an openEMSstim controller (Pedro’s derivative of Max Pfeiffer’s EMS toolkit), a medical EMS device, and a motor driver. Bands of copper tape extend from the box to the two crank generators (that function as energy harvesting dynamos), each with four pressure sensors (that detect proper cuff closing) and electrodes (for muscle stimulation). The crank generators feed a subsystem of two LiPo batteries nested below the black box. A (MOSFET-based) switching circuit determines which of the two is powering the installation and which is being recharged.

Ad Infinitum: a parasitical machine that lives off human energy (the piece’s full name) premiered at the Natural History Museum Bern, Switzerland, in September 2016 and was installed during Science Gallery Dublin’s “Humans Need Not To Apply” (see visitor reaction video below) from February to May 2017. From September 7th to 11th, it featured in “The Practice of Art and Science” exhibition at this year’s Ars Electronica (themed “AI – The Other”) in Linz, Austria. 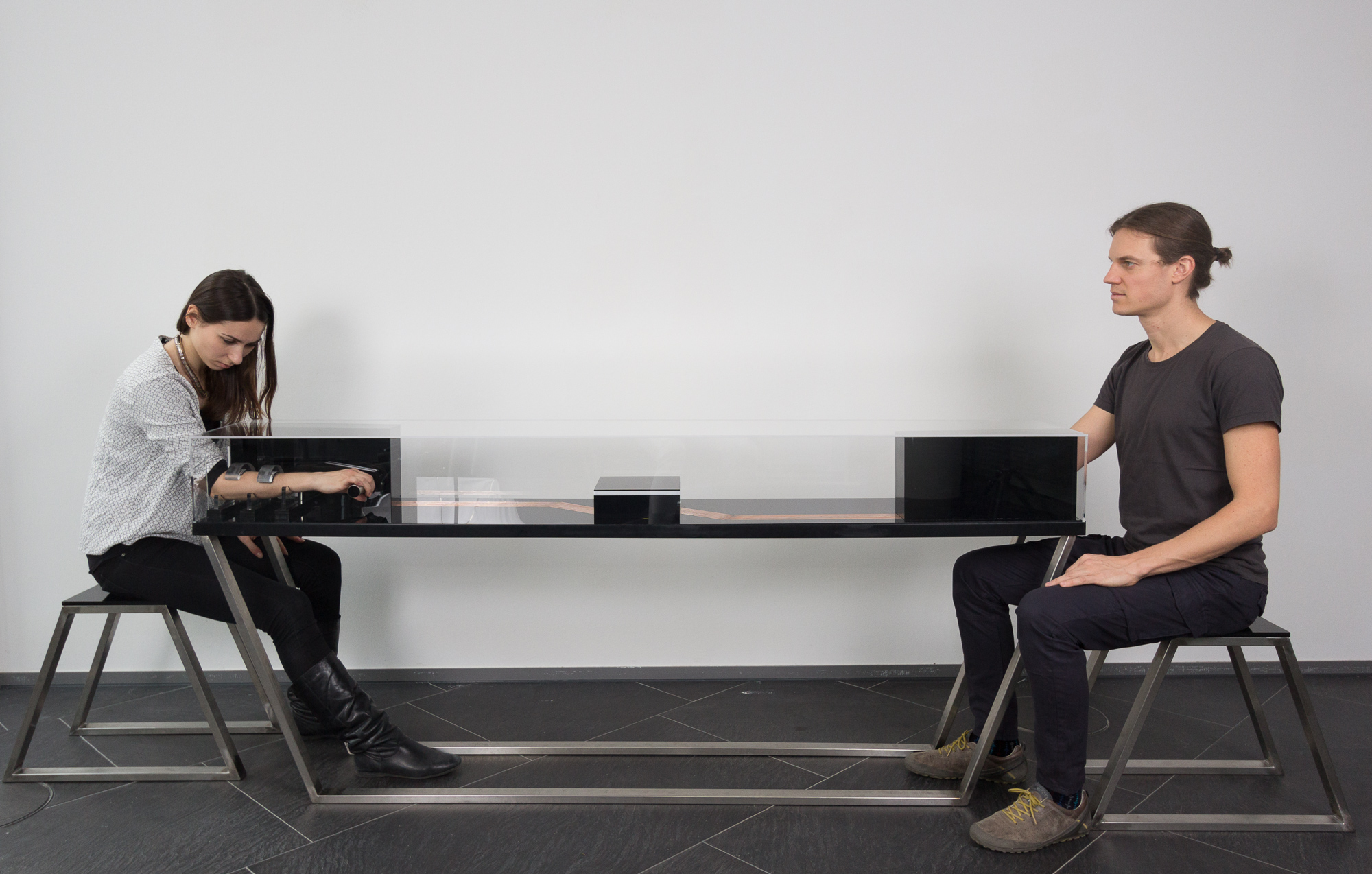 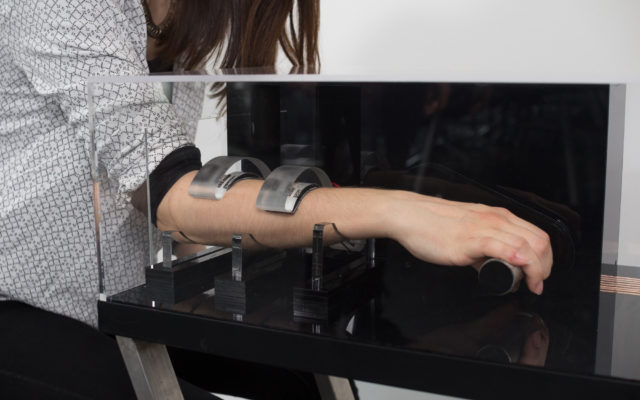 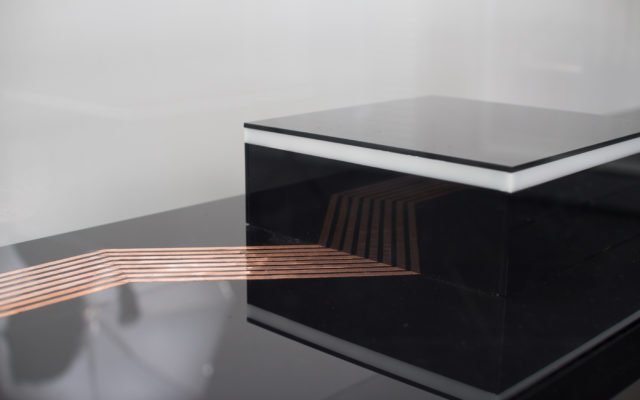 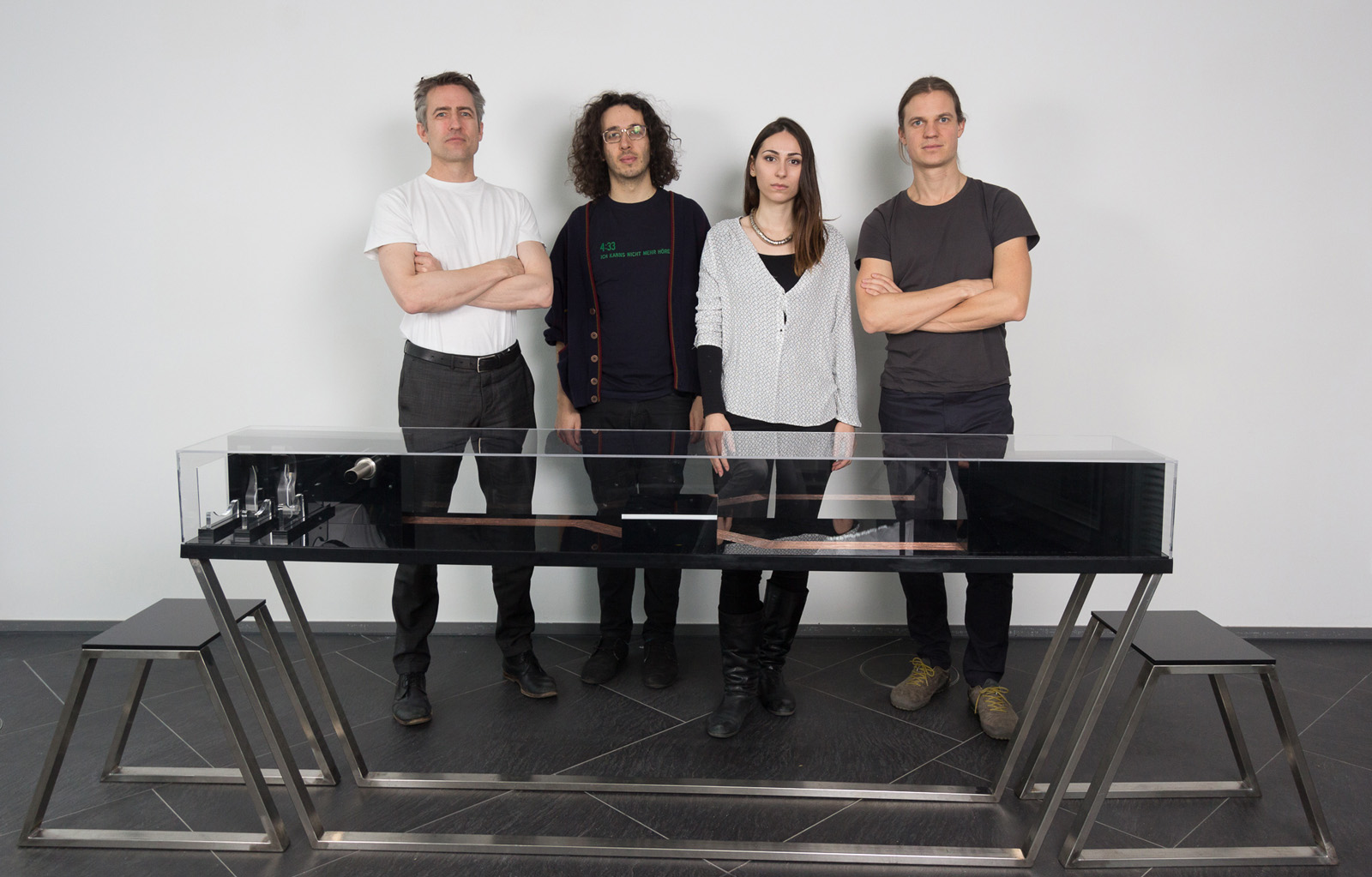 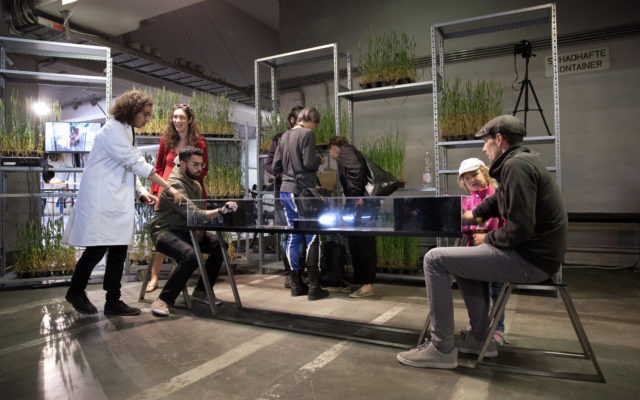 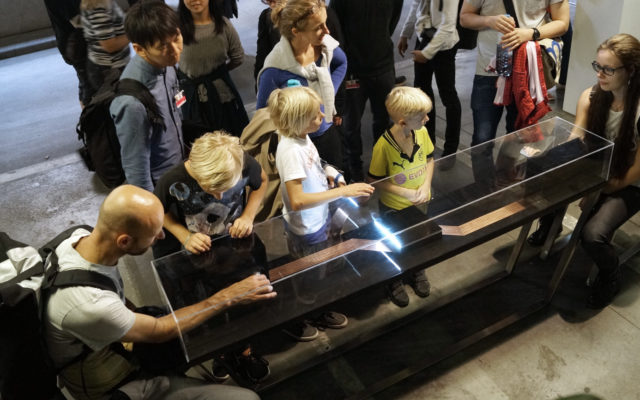 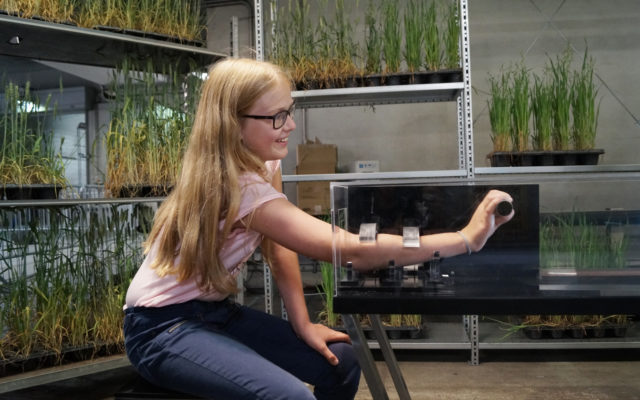 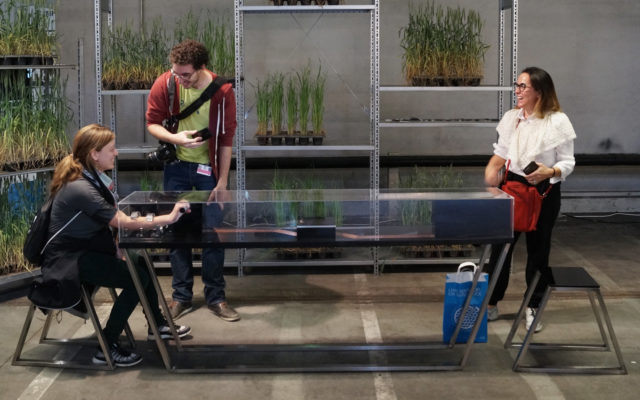 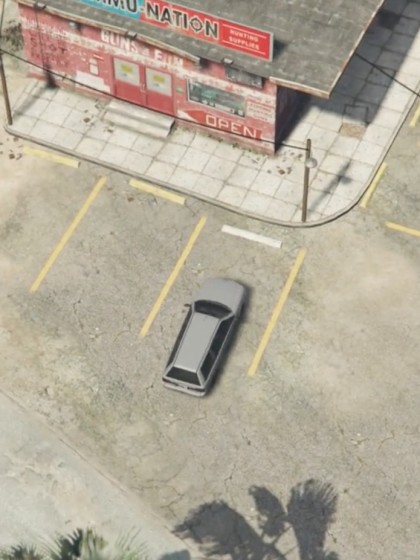