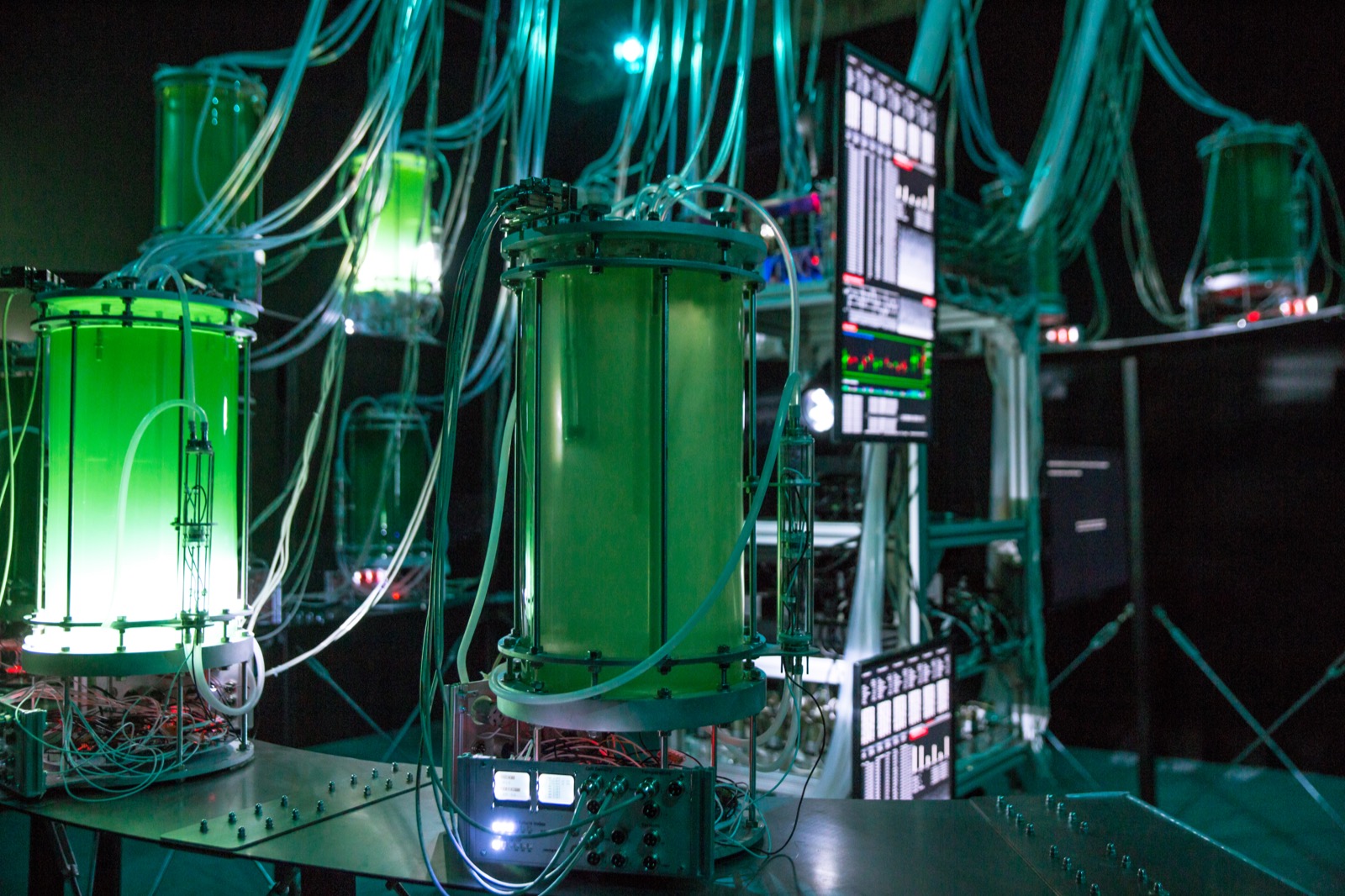 Created by Michael Sedbon, ‘CMD‘ is an apparatus designed to explore how our technologies and ecosystems interact and what narratives and politics do they serve. The project questions what sort of ecological and social logic should be implemented in the design of automated infrastructures and algorithms, and if it is possible to frame out technologies and system as a single emergent life-form. If so, what would be the fitness factors that determine survival and how are these factors measured.

‘CMD‘ is comprised of two artificial ecosystems sharing a light source where access to this light source is granted through a market. Each colony of photosynthetic bacteria can claim access to light thanks to credits earned for their oxygen production. The rules driving the market are optimized through a genetic algorithm that is testing different populations of financial systems on these two sets of Cyanobacteria. The photosynthetic cells and the computer are experimenting with different political systems granting access to this resource and the system oscillates between collaborative and competitive states.

The genetic algorithm frames the rules of these proto-societies as genes. By breeding populations of societies, new generations of markets arise. The sum of microscopic series of events determines the status of the system at a macroscopic scale.

If one would like to go away from the Cartesian mind-body(machine) dichotomy when perceiving Humans and toward a more universalizable vision of lifeforms where bodies are solely a permeable boundary between semi-closed ecosystems hosting billions of individuals with their own will and interest, together forming the emergent nature of the self, then, such a vision should be transposable to the analysis of a software/hardware stack. Hence, an evolutionary design paradigm for machines and systems will look at scales going from micro-transistors to planet-size computation network infrastructures. Such an analysis requires a thorough investigation of the socio-techno-industrial-political apparatus on which the manufacturing and the exploitation of the parts rely on.

‘CMD‘ consists of custom made sensors and software, using TouchDesigner, Arduino and hand-made bio-reactors and PCBs. It is designed to be seen as an experimental setup where the initial conditions were designed to allow an automated data collection process informing a machine learning setup (a genetic algorithm).

The project has been produced as part of the Bio Arts and Design Award 2019 and is currently exhibited at MU Artspace, Eindhoven, NL as part of the Polarities show (29th of November 2019 to March 1st, 2020).

Radiator by Sebastian Sadowski is a web-based generative design application that tries to visualise the individual imagination of radio waves. Radio radiation can’t be seen by the human eye and…