Registration for A-B-Z-TXT, the ‘school for 21st century typography’ we are co-presenting in Toronto this August is now open. Join us for four days of masterclasses, workshops, and incisive lectures and discussion!

In just six weeks, A-B-Z-TXT gets underway at Toronto’s media art gallery InterAccess. The four day intensive features a programme of hands-on thinking, thought provoking talks on the science of letterforms and the enduring cultural resonance of the written word from a cadre of designers, editors, and even a few linguists – and we are looking for the twenty multidisciplinary participants to undertake this adventure with us. Do you yearn for a deeper grasp of typography across media and its expressive potential beyond market trends? Are you curious about how computational approaches might inflect (or outright mutate) how we work with type? If you’ve already answered yes to these questions then join us! We are accepting applicants through July 22nd. Otherwise, read on for a little more detail about some of our offerings and a quick survey of some of the output of our prolific, talented instructors.

↑ A trio of opening spreads from the influential survey text FORM+CODE (2010), on which LUST collaborated with Casey Reas and Chandler McWilliams

At the core of A-B-Z-TXT is a pair of one-day masterclassess run by LUSTlab (the r&d offshoot of LUST) from the Hague and Paris’ N O R M A L S. The subjects of a in-depth interview here three years ago and some of our favourite HOLO collaborators, N O R M A L S should be quite familiar to CAN readers. However, while we’ve featured their augmented catwalk styles and their cerebral graphic novel series here in the past, we have not touched on their experiments with type. Drawing on N O R M A L T Y P E (see the above video) the duo’s masterclass .PTF – A Speculative Type Format and will see participants experiment with parametric text as controlled by a custom (and beginner friendly) Processing application. Free to play with strange contextual behaviours and possibilities, participants will make dynamic text that changes based on variables like “time, space, data inputs, and even interaction.” Equally exciting, LUSTlab’s Unmapping Creativity will also explore more experimental outputs and approaches to working with type. In their words: “can typography be physical, or a sound, or an experience? With its reliance on vision, is it still one of our best tools available or are there alternatives? To find out we’ll ask: If typography is the answer then what is the question?” Using hands-on analogue prototyping, and bottom-up thinking the day will be spent working through a range of group-based speculative exercises. 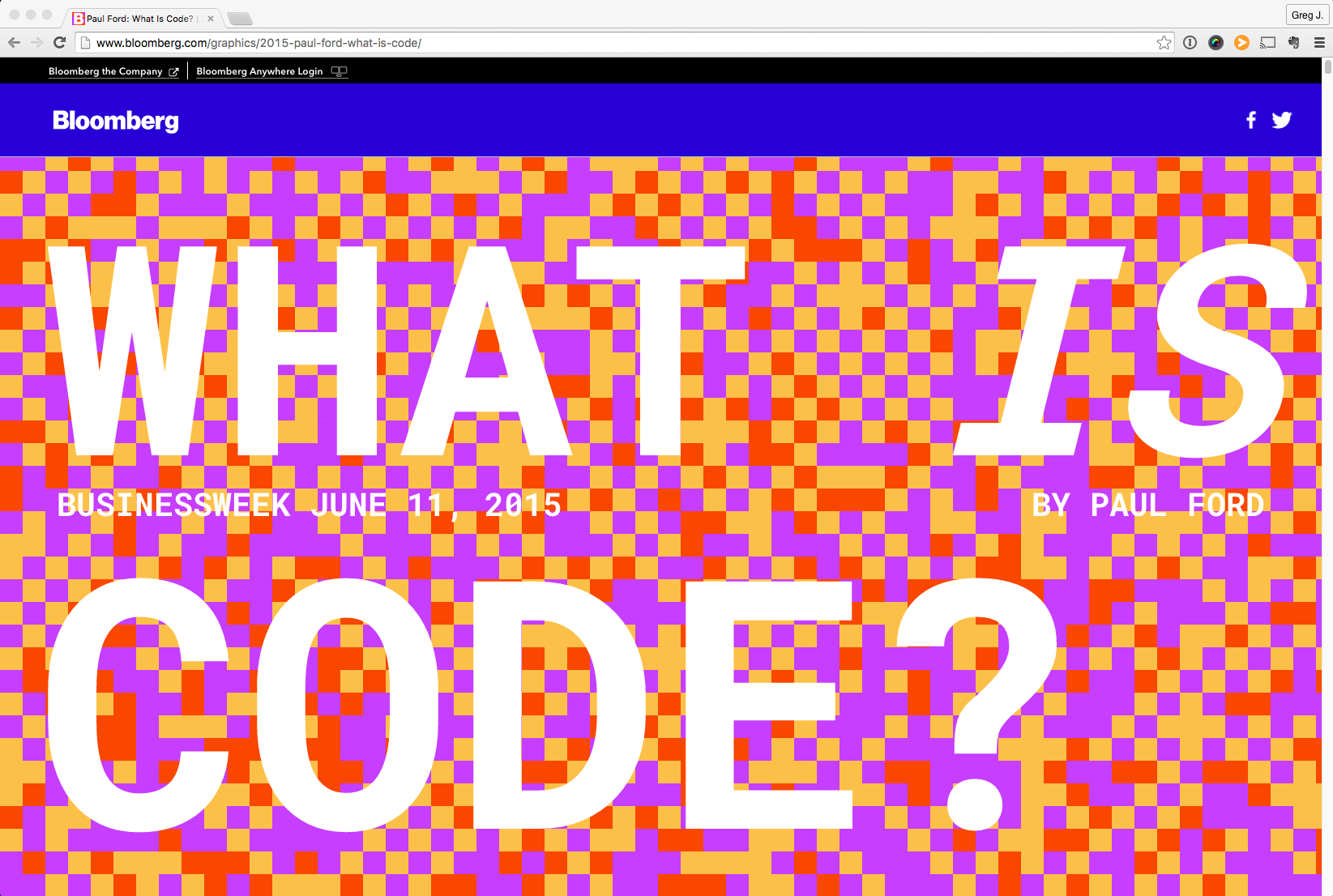 We are also excited to be hosting a few of the bright lights from Bloomberg Businessweek. Transcending its (potentially) dry subject matter the weekly is undoubtedly one of the most whimsical and irreverent publications out there, and that zeal is largely derived through playful, rule-breaking design. Joining us will be its up-until-very-recently Deputy Creative Director Tracy Ma (who just announced she is leaving the revered publication to become the Creative Director of Matter Studios) and Steph Davidson who does a range of illustration, GIFs, and web work for the mag’s digital arm. Tracy was the creative force behind many of the recent eye-grabbing covers and her fingerprints were to be found throughout the editorial design in each and every issue for the last several years (and she also organized the mag’s design conference); Steph on the other hand is emblematic of Businessweek’s considerable retro, ironic, and totally contemporary web savvy as evidenced by the recent Global Tech Issue and her design for Paul Ford’s widely noted and epic (37,000 word) 2015 essay “What is Code?”. The duo of New Yorkers will team up to give a talk and a half-day workshop – and while we don’t know what to expect, we are sure it will be equal parts fun and smart.

↑ A spread from Infrastructural Monument and the signage for “Corner, Block, Neighbourhood, Cities” at the Canadian Centre for Architecture, both designed by Sean Yendrys / Self-Similar and relay, two of the many award winning artists’ publications produced by Lauren Wickware

Two computational design studios and a pair of irreverent designers do not a typography school make, so we’ve got an exciting lineup of other faculty lined up: joining us from nearby Hamilton, Lauren Wickware give a talk and a “tweezer typography” workshop drawing on her experience doing impeccable publication design for museums and artists; splitting his time between Montréal and New York City, Sean Yendrys will be speaking about the role of type in his many collaborations with artists, architects, curators and institutions; hacker of laserprinters and composer of anamorphic scenes, the inventive and imaginative Ali Shamas Qadeer will also be speaking. And to provide a little contrast in thinking about the many facets of type and text, we also have the erudite editor Patrick Pittman (of our Canadian indy mag BFFs The Alpine Review) and linguist and Inuktitut expert Alana Johns from the University of Toronto. We have two additional speakers lined up to round out our symposium and we’ll be announcing them in the coming weeks.

Rather than sing further praise about these prolific and talented folks, its easier to just show some of their work – so note the above (and below) selection of books, catalogues, spaces, and experiments. 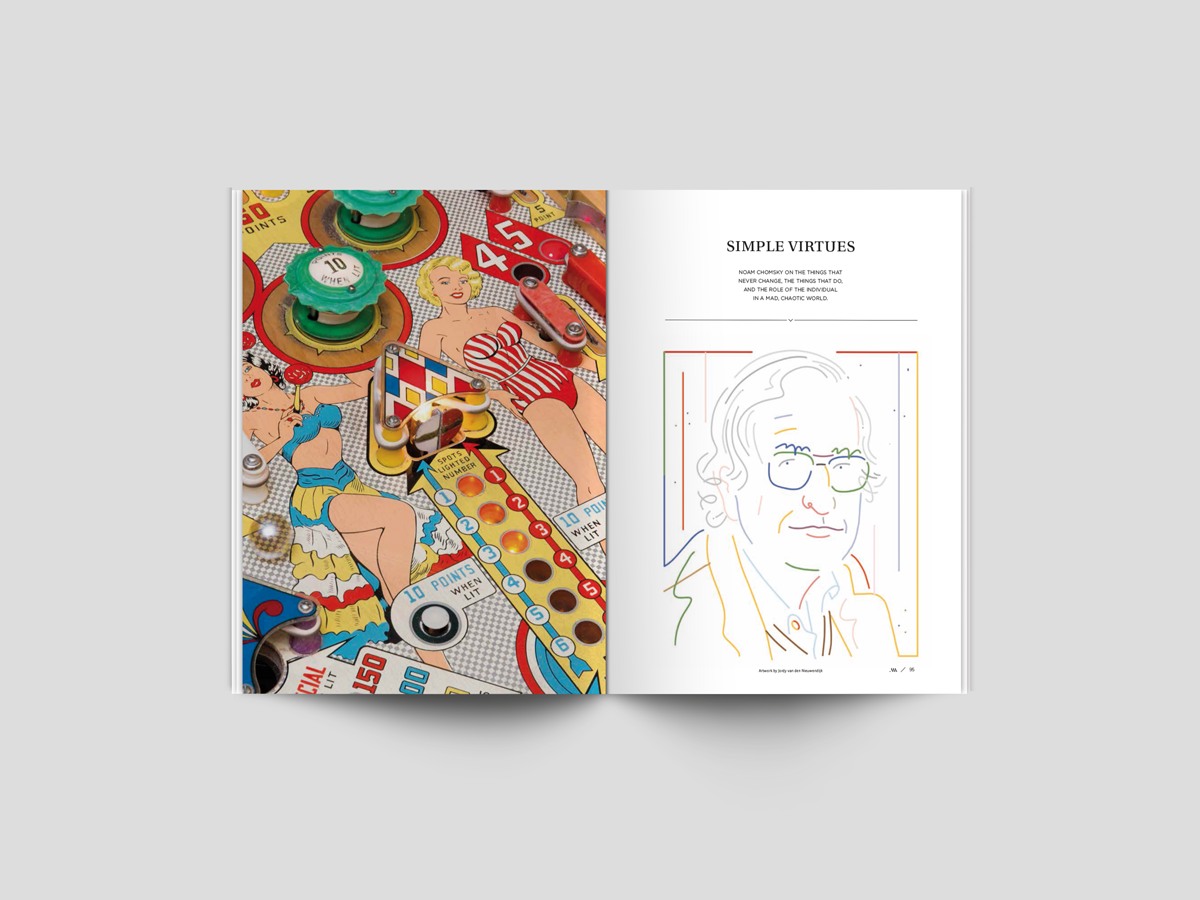 ↑ A sneak peek of the much anticipated third issue of The Alpine Review, which is due this summer / Output from Ali Shamas Qadeer’s The People’s Riso (a black and white laser printer hacked to print spot colours) and anamorphic type the Toronto-based designer devised for New York Times Magazine ↓

Thus ends our preview of A-B-Z-TXT, if you are in or near Toronto consider joining us for our playful consideration of the future of type. We are looking for twenty thoughtful practitioners to participate in our intensive and “learn about letters, language, print, and code as they shape our post-digital media terrain.” Thus far the interest has been very high – so we’d advise you apply sooner rather than later. 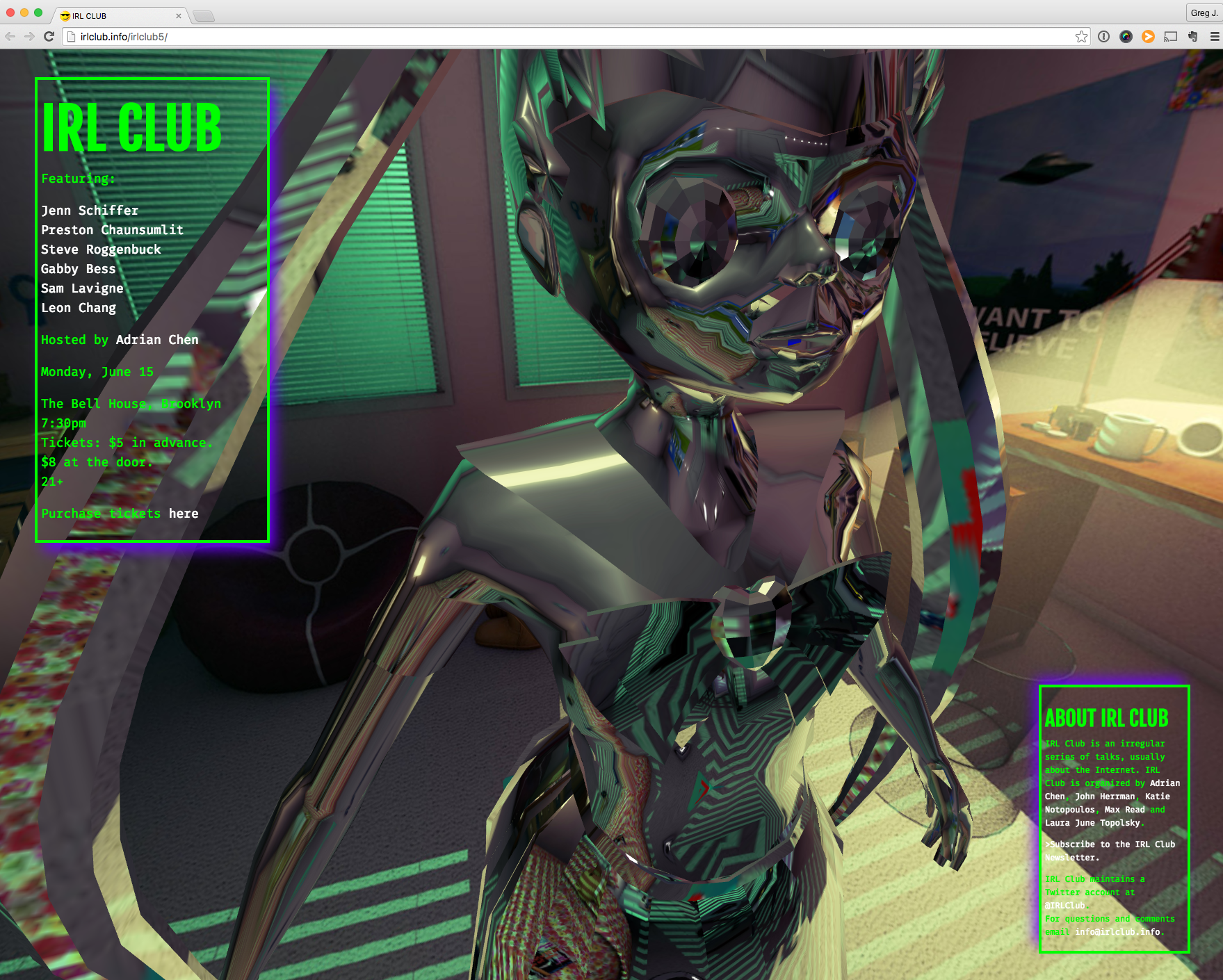 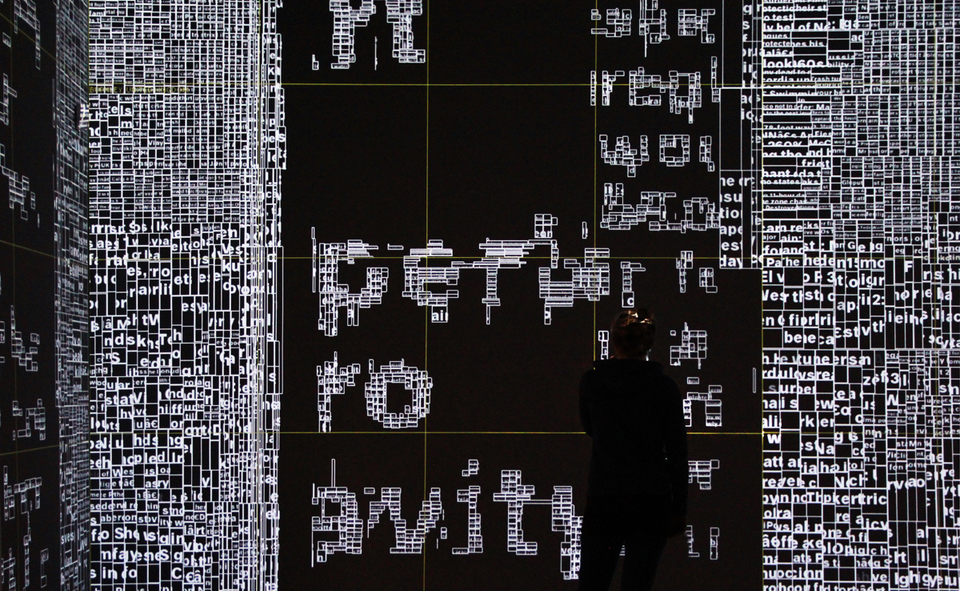 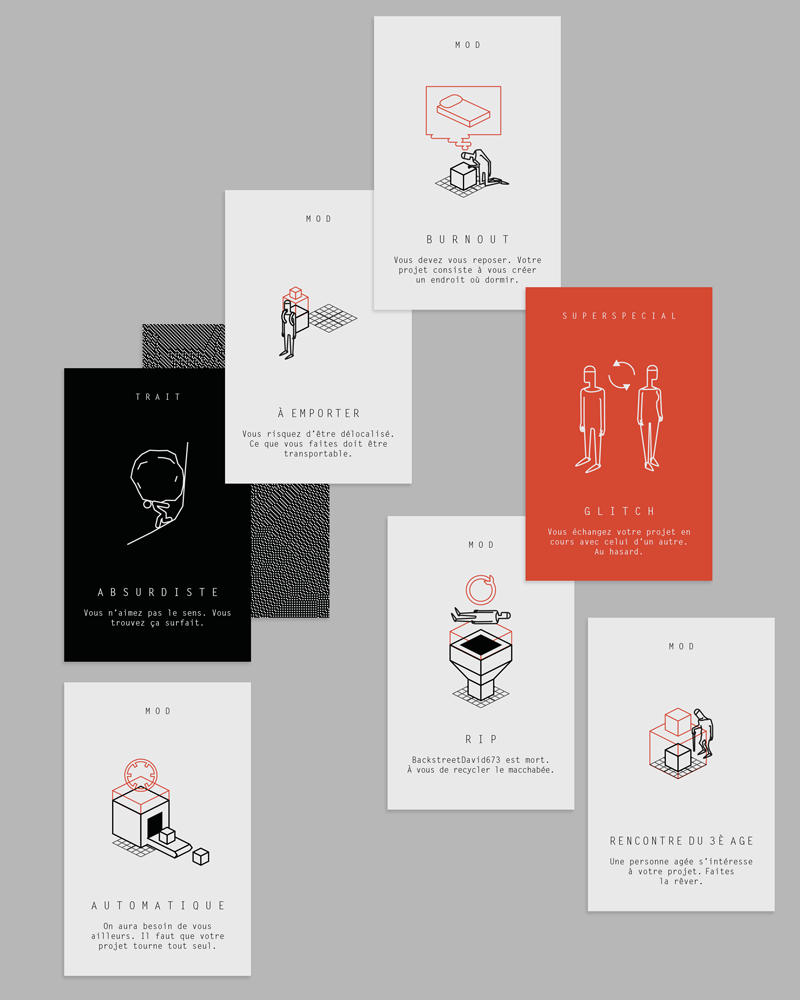