This year marked the sixteenth edition of the Montréal’s venerable MUTEK festival, which ran May 27th-31st and celebrated myriad forms of eclectic electronic music and broader digital creativity. Featuring live performances by scores of top-shelf electronic musicians including James Holden, Pole, Kode9, Rival Consoles, John Tejada & DBX, the festival remains unrivaled in its musical programming and it continues to carve out a distinct space for engaging interdisciplinary media arts. As was the case last year, CAN & HOLO were invited to organize live Q&A interview sessions with some of the artists associated with the audiovisual performance portion of the program and we found these exchanges quite rewarding. While we did not get to dive headlong into the program like we usually do each year, here’s our report on the performances we saw and the ‘HOLO encounters’ interview sessions that HOLO Editor-in-Chief Greg J. Smith carried out on our behalf. 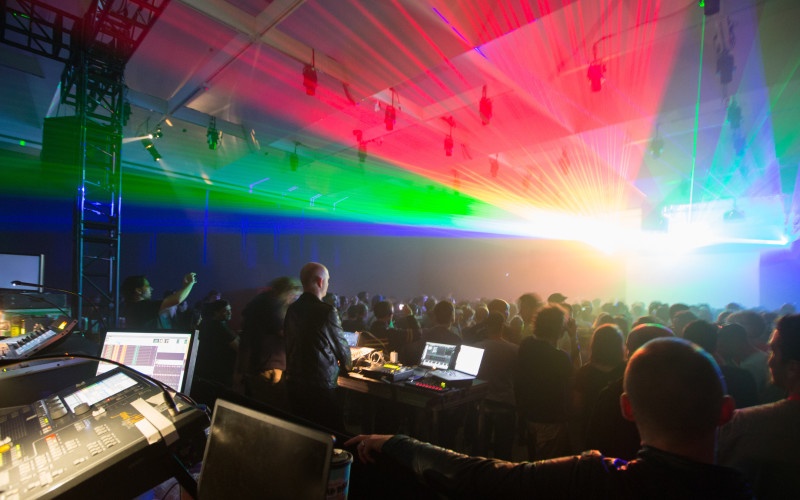 Having experienced his laser shows a few times in recent years, we were curious to see Australian artist Robin Fox’s new collaboration with Atom™ (aka Uwe Schmidt). Entitled Double Vision, the piece sees the two artists fuse their talents and create an AV show with three outputs: lasers, animation, and sound. Given the technical virtuosity of these veteran artists the show did not disappoint and it kinetically jumped between showcasing its RGB tri-laser array’s machinations, and Schmidt’s sardonic lo-fi CG animations and signature staccato electrofunk. Turning its restless recombination of its sound, light, and images into an asset, Double Vision was visceral and had half the audience dancing maniacally and the other staring slack-jawed. Fox and Schmidt will be touring the work this summer (its next stops include Unsound Toronto and Sónar+D) and it sounds like they’ll be collaborating further in the future—keep an eye on this duo.

In our conversation with Fox we took a deep dive into his process and motivations. With a synesthete Mother and a formative moment blasting sound through and oscilloscope and being awestruck by seeing the potential geometrical configuration of sound for the first time, Fox has spent the last two decades working in audiovisual performance. We discussed his evolution from composition into visual programming and then his descent down the laser rabbit hole. Most fascinating was his description of his ‘vocabulary’ of visual forms that he works with and has his lasers draw when performing—it was a really high-level description of how he thinks through his tools. The word ‘synesthesia’ gets thrown around in the media art world quite a bit these days and it was great to hear an artist who has spent his career figuring out what that term really can mean within a focused practice. 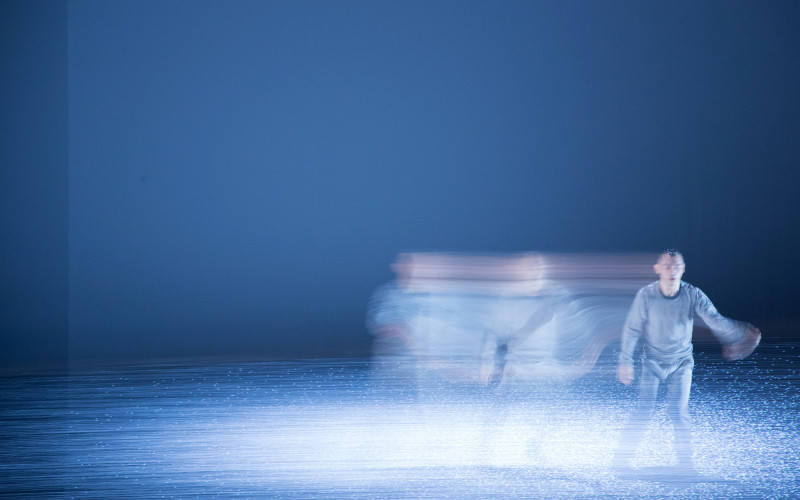 Japanese choreographer and dancer Hiroaki Umeda performed two works at MUTEK, quite fittingly on a A/Visions bill titled “Ballet Électronique.” In Split Flow he animated a simple white stage and interfaced with a rapidly oscillating RGB laser, as his extremities caught the beam its constituent colours flickered delicately—it was dramatic in gesture and subtle in effect. Umeda then upped the ante with Holistic Strata, where his solitary figure was bathed in a vast particle field and his body oscillated between being batted around by the maelstrom and directing it. The performance was finely tuned and received a wild ovation—normally reserved for the audience, it was great to finally see dance grace a stage at MUTEK.

Our Q&A session with Umeda was fascinating. We had some minor language issues but Umeda was extremely gracious about describing his process and the conversation was really rewarding. When asked ‘Is your body a canvas or a controller?’ in Holistic Strata he explained it could be both and then extrapolated that he didn’t just use his (sensor-laden) body to control the particle field, but through attenuating his motion he could control the audience’s perception of time. He said this all rather matter of factly and while it is probably pretty common parlance in choreographic circles it was a revelatory moment. Beyond expanding on the relationship between his installation work and choreography Umeda spent time talking through some of the basic premises of his ‘Kinetic Force Method’ approach to choreography which (in a nutshell) is about motion as a force that is universal and the body being incidental to that.

And of course there were a world of performances beyond our interview participants. Notably, Martin Messier’s Field saw him construct a bespoke apparatus for ‘playing’ electrical current and reconfigured the patch cables connecting the machines’s two halves to modulate the noisy flow. His performance had a real narrative arc and this was largely due to stagecraft: some cleverly deployed floor-mounted lights cast dramatic shadows of his figure during his furious connecting and the piece ended with Messier wielding the luminous cables in near darkness.

Interestingly, the A/Visions program was pared down to two shows (versus the usual four or five) this year. This was not so much a divestment in AV performance but an acknowledgment by the MUTEK team that visual experimentation has just permeated the entire festival—and not that many acts need to be staged in a concert hall type venue. Beyond the works discussed thus far, we also saw Takami Nakamoto (of Nonotak) and Sébastien Benoits play a set augmented by an array of stroboscopic LED bars, Tyondai Braxton presented his pod-ensemble Hive, and Steve Goodmen (Kode9) and Toby Heys mounted an infrasound/video installation based on their ongoing AUDINT ‘sonic fiction’ project.

On the Friday afternoon of the daytime program at Phi Centre there was a great moment in a panel discussion where Brian Massumi, Jonathan Sterne, and the aforementioned Goodmen and Heys were talking about sound technologies in military contexts, and Sterne was explaining the history of the gramophone. Suddenly a blast of dissonant tones emanated from the next room where Richard Devine was doing a modular synth demo. Totally unfazed by the interruption Sterne grinned and said “I’m just going to go with it.” As always, MUTEK’s charm was its ability to generate both productive friction and rich moments exactly like this. 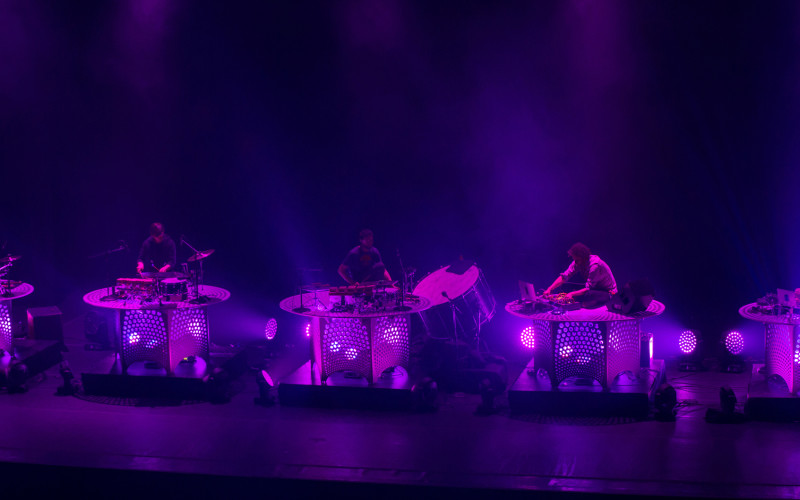 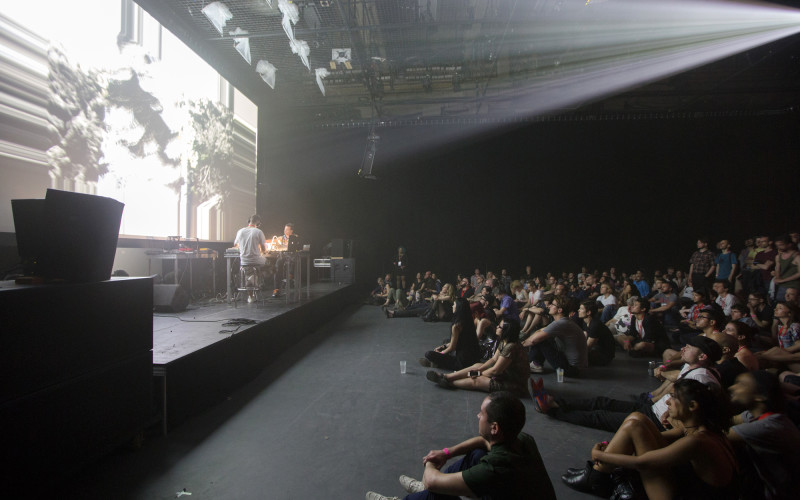 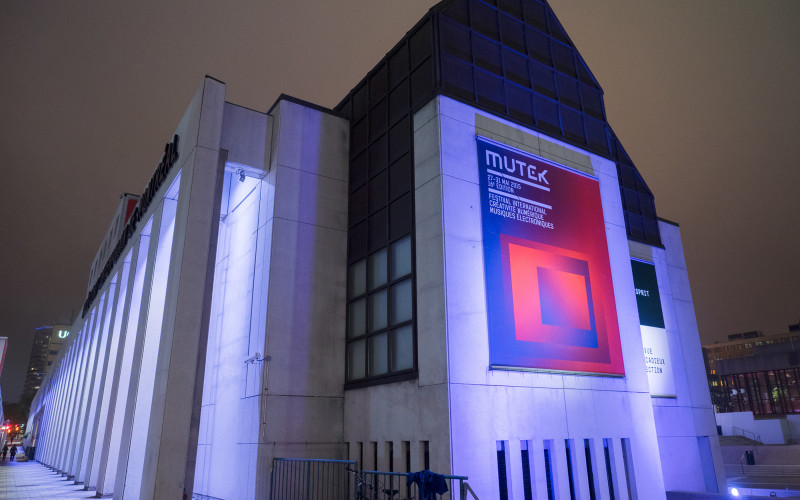 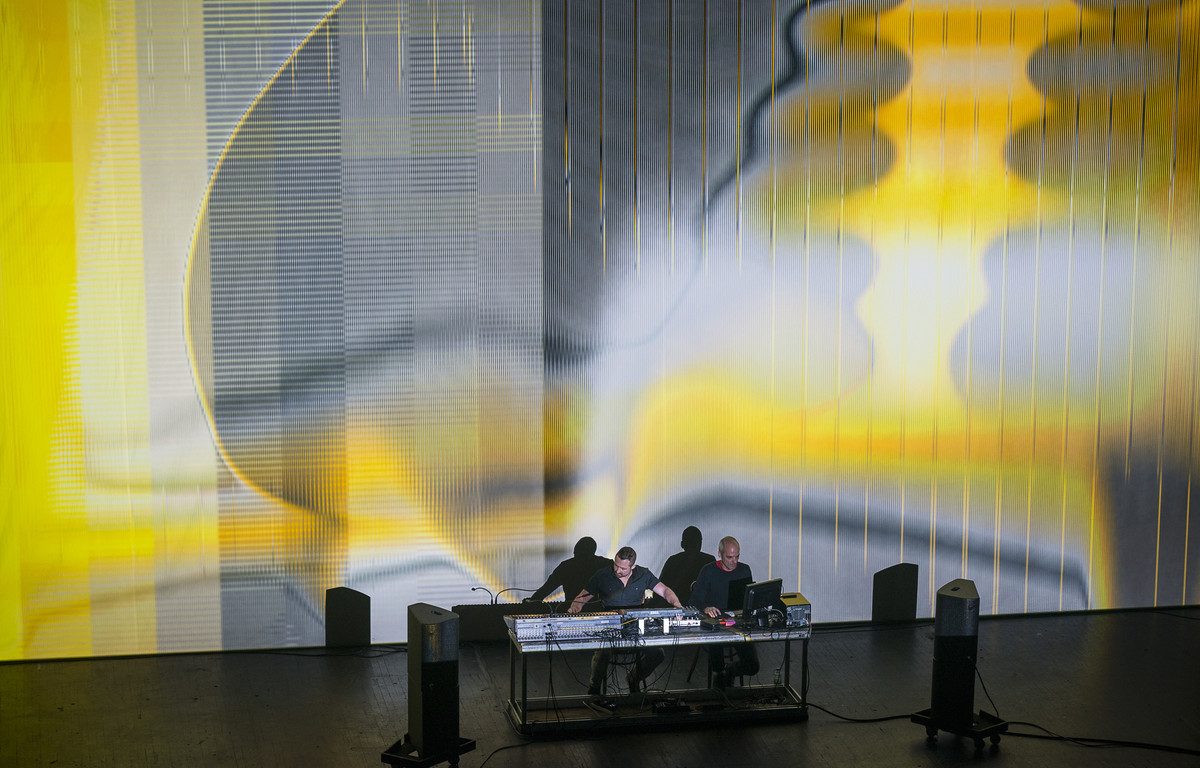 A report on the CAN/HOLO artist Q&A sessions and related audiovisual performances at Montreal’s EM15 festival, which was jointly organized by the teams behind MUTEK and Elektra.