Post-screen interfaces, museum hacking, scent transplants, 360° immersion: at the 15th anniversary edition of Geneva’s Mapping Festival (May 23 – 26), CAN is proud to host an eclectic workshop program lead by key artists, designers, and researchers in our field. Join us!

15 years is an eternity in the digital age. YouTube, Twitter, CreativeApplications.Net (CAN)—Geneva’s Mapping Festival precedes them all. Founded in 2005 to rally a prospering VJ scene (after all, Geneva is home to the makers of Modul8), Mapping quickly ascended to become Europe’s foremost summit for anyone interested in audiovisual synthesis and performance. But whereas other festivals came and went, Mapping is still going strong. The secret: as anything that retains relevance over time, the festival never stopped evolving, maturing, and diversifying. Now known for its cross-disciplinary mandate that merges creativity with criticality—“visual audio + deviant electronics”—Mapping has grown into a festival fixture that feels exceedingly current. Its 15th anniversary, for example, coincides with this year’s 30th anniversary of the World Wide Web; a fact that festival directors Ana Ascencio and Audrey Powell carefully weaved into the program. Under their direction, more than fifty international artists, designers, musicians, and researchers will join the festivities not just to dazzle us with “visual audio” (TUNDRA, Freeka Tet, Recent Arts, Grand River & Marco C), but to problematize the “deviant electronics” underpinning the Web (Marc Garret, Joana Moll, Tatiana Bazzichelli, Régine Debatty). Between the exhibition, the forum, and the performance program, the four-day schedule is dense with opportunities to converse, experience, and to learn hands-on. The latter is were we come in: once again, CAN is proud to contribute Mapping’s educational program. Across twelve workshops, lead by some of our favourite artists, designers, and researchers, participants will examine network infrastructures, prototype post-screen interfaces, build energy-free radio receivers, and transplant scents.

What to expect? Revisiting Mapping LAB 2018


For detailed workshop descriptions and requirements see the Mapping Festival page.
→ Special 10% discount for CAN members: [visitor][Log in for more info!][/visitor] [member]Enter the discount code A8S4N040 when purchasing a ticket.[/member]

↑ Part of the exhibition The Dead Web: Dominique Sirois & Baron Lanteigne’s In Extremis, a sculpture and video installation about liminal space

Interested in the workshop program? Consider staying for the entire festival, as the anniversary edition has so much to offer. There’s the exhibition The Dead Web and the Paradigm Shift forum, where select experts tackle critical issues in digital art and culture. And then there’s Mapping Live, a dense after hour program of audiovisual performances, live music and DJ sets. Here are the highlights:

“Will the Internet end soon?” In her exhibition The Dead Web – La Fin (May 23–27), Canadian curator Nathalie Bachand explores the hypothesized collapse of the World Wide Web. “How will power structures, at once dematerialized and delocalized, manifest themselves on economic and political levels if the network is disconnected,” asks Bachand. “But also, what is possible to do or say in the meantime?” First shown at Montréal’s Eastern Block in early 2017, the show includes installation and video works by Quebequoire artists Frédérique Laliberté, Grégory Chatonsky, Dominique Sirois, Julien Boily, Julien Tremble, and Projet EVA (Simon Laroche and Etienne Grenier—whose The Object of the Internet we featured here). For the Mapping anniversary edition three relevant works by Swiss artists—Lauren Huret, Romain and Simon de Diesbach, Lukas Truniger and Nicola Hein—were added to the exhibition.

At the third edition of “Paradigm Shift” (May 24-25), the forum integral to Mapping since 2017, Spanish curator Carmen Salas once again gathers critical thinkers and practitioners to provide commentary on the urgencies of the technological present. “This year’s theme ‘Broken Home’ attempts to make visible the economic drivers that underpin our digital ecosystem,” Salas writes. Discussing the Web’s implications at a political, socio-cultural, and environmental level 30 years into its existence, we will hear from Marc Garrett (on unlocking proprietorial systems), Tatiana Bazzichelli (on whistleblowing as artistic practice), and artist Joana Moll (on her project The Dating Brokers). Joining the conversation across two panels (E-Wasteland, The Future Web) are Benjamin Gaulon, Luc Meier, artist Simon Laroche, We Make Money Not Art’s Régine Debatty, curator Nathalie Bachand, Romain Tardy, and Alexandre Monnin.

Traditionally a Mapping strength, the anniversary edition of the festival’s audiovisual performance and concert program doesn’t disappoint. We look forward to TUNDRA’s spectacular laser-fest NOMAD, Freeka Tet’s eccentric “audio & video plunderphonics”—in his show UV101, the artist ‘performs’ his face via a distorted camera feed—and Recent Arts’ Skin, a synaesthetic concert where Valentina Berthelon and Tobias Freund blend blend lights, projections, and experimental music to the voice of singer Barbie Williams. Also on our list: Grand River & Marco C’s 0,13% live A/V, and the sounds of Estebahn, Acid Kunt, and Audrey Danza. The anniversary comes to a sweet end on Sunday afternoon (May 26). Over brunch, a photo exhibition, and DJ sets by Temiri, Kayne the Hermit, Tobias., Dandy Jack, and Opuswerk Mapping invites us to reminisce on 15 years of “visual audio + deviant electronics”. We can hardly wait! 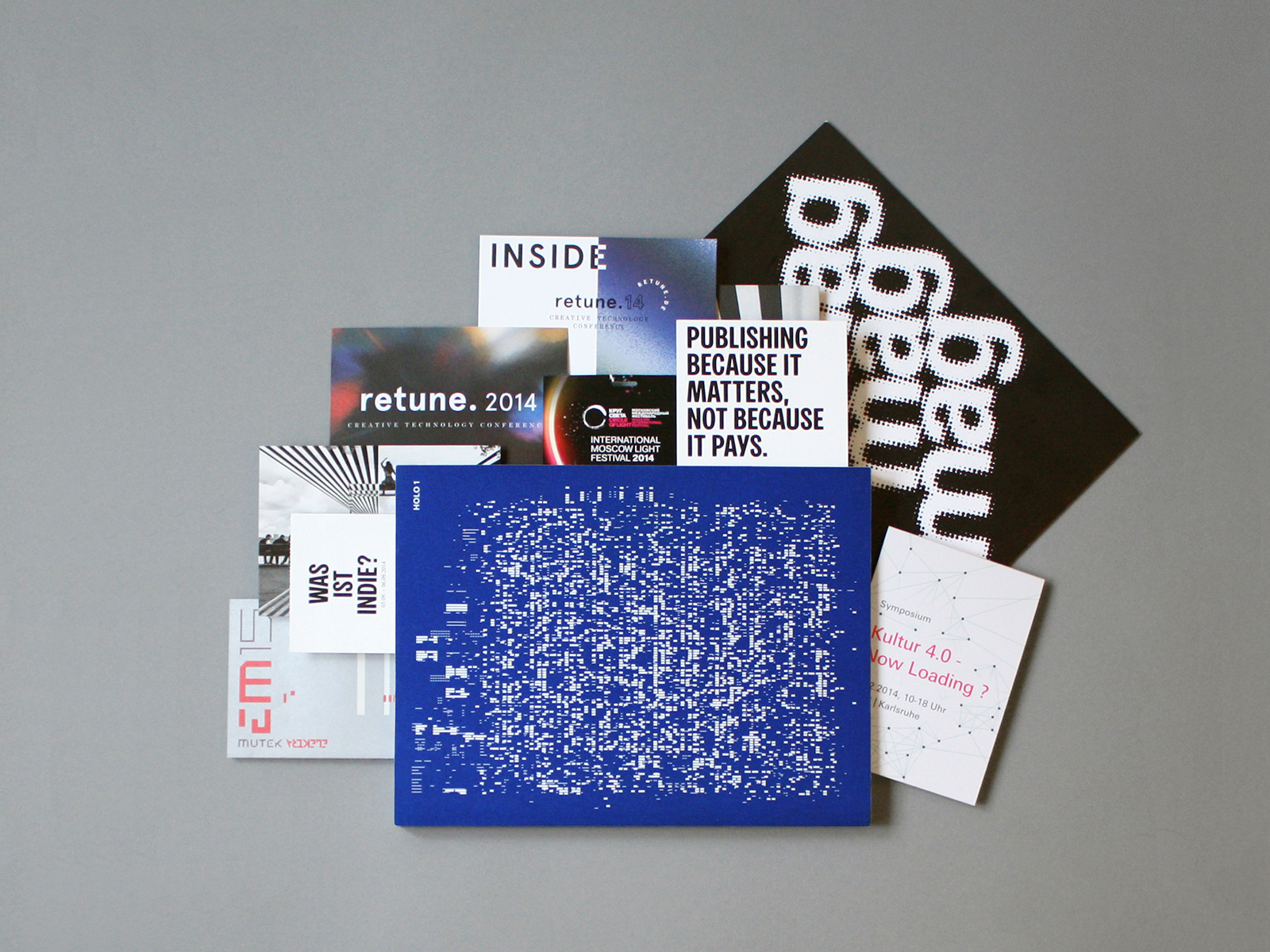 Bookmarks and Milestones: An Annual Report (of Sorts)

By publishing (and many other) standards, HOLO just took its first steps. Yet nine months after the magazine’s launch, we look back and can’t believe how far we’ve come. What happened? Here’s a stocktaking, a travelogue, and a teaser.   The middle of December is a somewhat special time for us. Two years ago this past Monday, the…