This weekend, February 3rd to 4th, we will join 230 TouchDesigner users at Derivative’s (sold out!) TouchDesigner Summit in Berlin for a 48-hour marathon of workshops, masterclasses, and presentations. Here’s why:

Software tools, the ideas they inspire, the work they inform, and the communities they foster have always been at the heart of CAN. One needs only to click onto our content filter and a Swiss Army Knife of computational practice opens up. One such filter category is TouchDesigner, the node-based visual development platform famous for its capacity to drive high-performance large-scale installations (Leviathan’s 150 Media Stream), audiovisual performances (Carsten Nicolai’s unitxt – see opening image), and Hollywood special effects (Alfonso Cuarón’s Gravity). The people behind the software, Toronto-based software company Derivative, are in Berlin this weekend for the second ever TouchDesigner Summit, a two-day marathon of workshops, masterclasses, and presentations. More than 230 users from all over the world will gather at Berlin’s Forum Factory to connect, share, and learn — a knowledge exchange we are proud to participate in.

Community building in the field (TLBR): TouchDesigner workshops and presentations at Belgrade’s Resonate festival 2013, at the 2017 edition of MUTEK in Montreal, at the (first ever) TouchDesigner Summit 2016 in Berlin, and at ATC Festival 2015 in Gwangju.

Building a global community takes time, and even more work. In the case of TouchDesigner, it involved nearly twenty years (the first version, TouchDesigner 007, was released in 2001) of supporting users online and ‘in the field’ – be it at companies, universities, or at events around the world. But while the userbase is now truly international and workshops common within the educational program of popular festivals such as MUTEK, Mapping, or Resonate, dedicated community gatherings are still rare. The first TouchDesigner Summit happened only two years ago, in February 2016, and was set up as little more than a one-day test drive. “When we asked the community at the time to submit topics they would like to present, we received more proposals than could be stuffed into a single day,” states the Derivative website. In the end, about sixty attendees powered through the eleven presentations over twelve hours at Berlin’s Betahaus. The same year, the community took up the idea: Russian TouchDesigner users Yan Kalnberzin and Evgeniy Afonin organised the four-day TouchFest in Moscow, drawing a whopping 250 people – “an impressive marathon of interactive madness and zero fluff!”

This year, Derivative is back at the helm. “The community has grown and matured hugely with more and more expertise coming online from all corners of the globe,” writes Derivative’s Isabelle Rousset about the yearning to assemble. Again flooded with proposals, they’ve expanded the format to two days and switched to a bigger venue to accommodate a bigger crowd. Forum Factory Berlin offers a main hall plus three different spaces, all of which are being used in parallel. “It will be particularly exciting to have some of the early drivers of the community alongside a TON of new brilliant and creative people! I’m generally familiar with the regulars in our community, but 50% of the people attending I don’t know at all. That’s exciting!” Why Berlin again? “Based in North America, we sometimes feel a little distanced from our European community,” writes Isabelle and Berlin seems a good halfway point to draw users from both east and west. The date isn’t an accident either. CTM Festival and transmediale, the two Berlin landmark events around art, technology and music coindicing with the summit provide context and even more reasons to make the trip. Sure enough, tickets sold out in no time.

AxiDraw and Ableton, kinetic puppetry and pixel mapping, sound synthesis and shadertoy, VR and voxel architectures – the wide spectrum of applications and technologies referenced throughout the program speaks to the versatility of TouchDesigner. Here’s a quick break-down of the many things to learn:

The summit’s highlight will arguably be hearing from the Derivative folks themselves: founder and computer graphics mastermind Greg Hermanovic will share glimpes into TouchDesigner’s future (followed by an Q&A) while Isabelle Rousset will open a conversation about building a strong community of “TouchDesigneurs”. 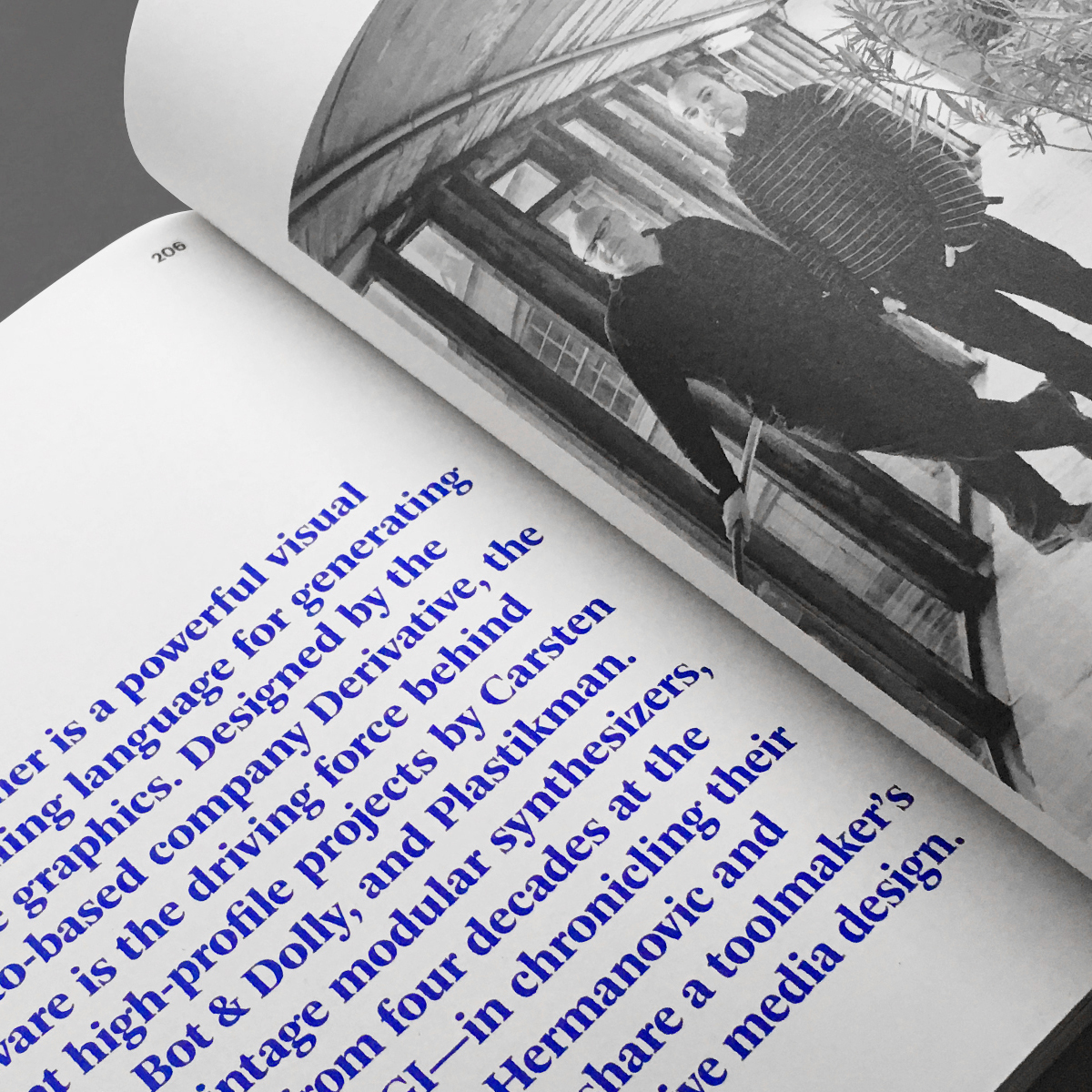 Derivative and CAN/HOLO cross paths regularly. We cover select TouchDesigner projects here on CAN; we’ve hosted TouchDesigner talks and workshops at festivals we helped produce (Resonate in Belgrade, Circle of Light in Moscow, ACT Festival in Gwangju), and the inaugural issue of our magazine tells the Derivative story in all its glory – from when a young Greg Hermanovic first touched an onscreen image in 1974, to the staging of Plastikman, and beyond. On Sunday evening, our own Alexander Scholz will join the summit to talk about the making of that story, the complexities of context, and how work is being disseminated (in the magazine and elsewhere). And of course: copies of HOLO 2 will be on sale as well. Thanks for having us, Derivative!

“The TouchDesigner community has always felt very much like ‘family’ and ‘friends.’ Some we’ve met and many we have yet to, but still the engagement level and the generosity of these individuals giving back and feeding into the community is very familial. So this will be very much a friendly ‘clan’ meeting,” writes Isabelle. For the clan members who didn’t get a ticket – the summit is fully sold out – presentations will be recorded and shared later.

The TouchDesigner Summit will take place at the Forum Factory (Besselstraße 13–14, 10969 Berlin) this weekend, February 3rd and 4th, with doors opening at 9am.