Earlier this year, Resonate festival in Belgrade (SR), in collaboration with KIKK Festival in Namur (BE) and STRP Biennale in Eindhoven (NL), was the host to Transcranial, a CAN initiated project bringing Klaus Obermaier, Daito Manabe and Kyle McDonald to Belgrade for two weeks to work on a new performance piece. The project is designed to develop in a number of stages, creating a vehicle and a bridge between the festivals in Europe as well bringing together artists that would not normally have the opportunity to collaborate.

For more than two decades Vienna-based director/choreographer, composer and media artist Klaus Obermaier has been creating innovative works in the area of performing arts, music, theatre and new media. At the same time, Tokyo’s Daito Manabe, remains one of the leading artists in the creative technologist field and works with his Rhizomatiks collaborative to playfully expand the boundaries of technology in in art. Finally, from NYC, Kyle McDonald works at the forefront of collaborative art and technology practice, contributing to and creating some of the most mesmerising and clever social, net and installation art projects. 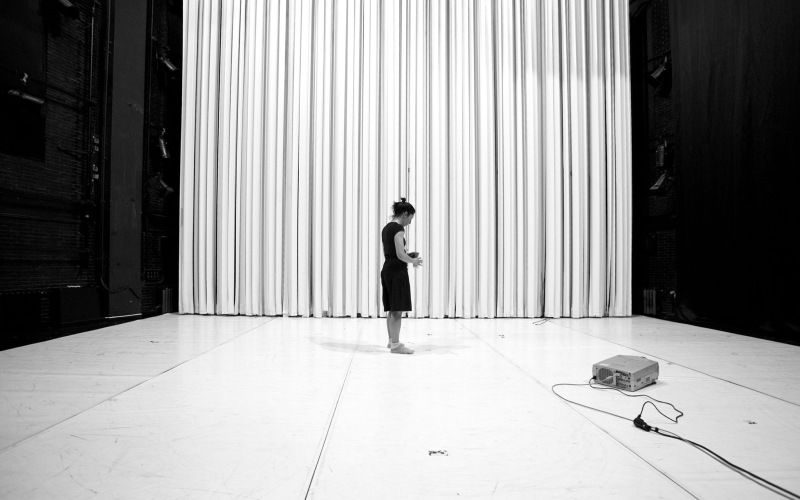 The Transcranial project is concerned with how contemporary digital technologies and computation tools influence design production, project development and performance. It asks how do you integrate new on-line/off-line digital scores and related choreographic resources produced by artists into academic programs? What are methods to stimulate new forms of collaborative research involving dance and performance practice? Starting with Belgrade, the project aims to be a continuous and reflective research, building on the experience and interests of participating artists and allowing new work to emerge that brings different areas of investigation together into a coherent whole.

New technologies have always made their way into the performing arts; in the mid 20th century artists began to explore the integration of media technologies with live performance. Two who are most often cited from this period are Czech scenographer Josef Svoboda, whose understanding for the kinetic properties of space resulted in inspirational combinations of film and live performance on stage; and renowned American choreographer Alwin Nikolais whose use of multimedia on stage challenged dancers to explore the space and movement in new ways (ref). These two artists established precedents for the integration of media and live performance on stage that can be traced through the increasingly diversified work of a range of theatre and dance makers including: Robert Lepage (Canada), Wooster Group (USA), William Forsythe (Germany), Marcel.li Antonio Roca (Spain), Dumb Type (Japan), Hotel Proforma (Denmark), Blast Theory and Station House Opera (United Kingdom).

While the format of ‘a stage’ creates a specific output requirement, it is the very process the projects aims to highlight. The theme and the title, Transcranial, is related to magnetic stimulation, a noninvasive method to cause depolarization or hyperpolarization in the neurons of the brain. The process is able to induce weak electric currents using a rapidly changing magnetic field, causing activity in specific or general parts of the brain with minimal discomfort, allowing for the study of the brain’s functioning and interconnections. One is able to pinpoint particular parts of the brain and able/disable them, creating a neural glitch. The theme of the project acts as a vehicle to explore performative possibilities of mind and body onstage. Things get interesting as, Klaus Obermaier points out “the software—the computer—is the third performer on stage.” It is the mutual awareness between the dancers and software that creates the dynamic, one that plays out like a conversation.

The performance is currently divided into three acts. The first segment is concerned with ‘face’, the second with ‘body’ and the last brings them into conversation. The first act opens with the dancer sitting, his face wired. As the pre-recorded video of the other dancer plays, his face gets electrocuted in a way that replicates the expressions on screen, almost as his face would be directly controlled by hers. The facial expression data is also used to generate audio, which completes the choreography of the first act. Behind the scenes, the magnitude of facial electric shocks is controlled via custom MaxMSP application, should the impulses be insufficient to mimic the facial expressions of the projected dancer.

The second act is concerned with the body. Computer vision and openFrameworks are used to process the dancer in real-time, breaking each separate body part into several pieces. Each part’s behaviour is directly driven by input motion data which is obtained through computer vision. This way, different behaviours can be applied to the body parts, making these more or less rigid, more or less ‘detachable’. The motion data is sent via OSC to MAX/MSP application which generates a real-time audible response. This setup creates a constant dialogue between the performer, their body and sound. Movement becomes the instrument and each behaviour setup is a new playground. 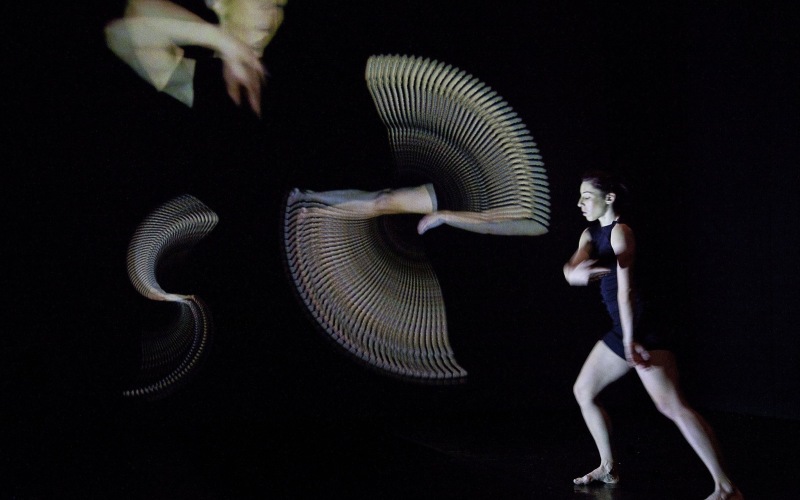 Finally, face substitution and ‘caricature’ expression amplifiers are used on the third act. The performer starts with a speech but his face turns into a random face from the audience (pictures from the audience are taken earlier, as people arrived). This is further exaggerated when the performer’s face gets duplicated, mirrored and delayed a few seconds on screen. The delayed version not only has a different face, but a different voice (via real-time audio-processing), like a schizophrenic echo that keeps mutating and absorbing the likeness of different members of the audience.

The creation of a performance work for the stage involves a complex interplay between many factors including the performers’ physicality and the dynamics of emergent choreographic forms. The overall computer system built for Transcranial is much more than a tool or simply an extension of the performer, but a potential performance partner. The independent behaviour of the software is not ‘controllable’ by the performer, but is influenced by his or her movement. This interplay between dancer and system and how one begins to understand the properties of the other, has been crucial to the conceptual and aesthetic development of the work; helping give shape to the choreography and underpinning its dramaturgy.

The Resonate 2014 collaboration constituted the first stage of project development. The next phase, culminating in a 30-45min performance piece is planned to take place next year at STRP Biennale 20-29 March (Eindhoven, Netherlands) and Resonate Festival (13-18 April) followed by an extended performance for the next edition of KIKK Festival in November 2015.

For further information on the project, please follow us here and partnering organisations for announcements.