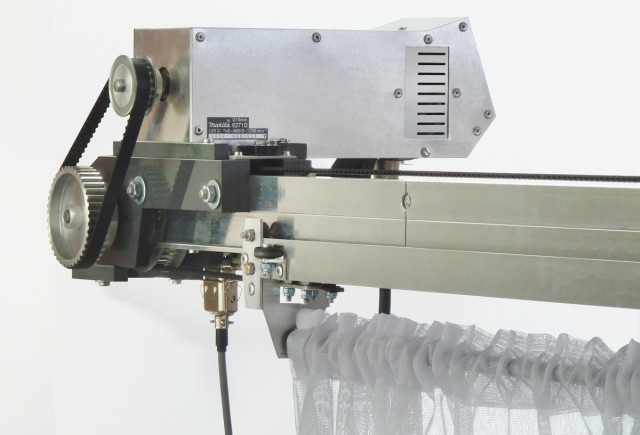 Niklas Roy has just sent us details of his "My Lttle Piece of Privacy" project Ver 2 now making it's way accross France for a number of exhibition in Créteil, Maubeuge and Lille. Named “Big Brother” (as it is about 10cm wider than the one in his workshop window) uses a Makita drilling machine motor. All the coded has been rewritten: The machine vision software is now coded in C++ (with OpenFrameworks) as there were some stability problems with the former Processing application. As a plus, it also performs faster with a top speed of ~3m/sec, which basically positions the curtain more precise. The microcontroller codes are also written from scratch. The old version had some servo adjustment potis inside the control box (for the PID settings). Now, the maintenance interface is completely screen based. Niklas has implemented a simple but powerful protocoll for the communication between Laptop and controller. Via this protocoll, not only position data is transmitted, but also all servo parameters - which are then stored in the controller's internal EEPROM.

When Niklas Roy was invited to show My Little Piece of Privacy at Sherbrooke’s Media Art Biennia lÉspace [IM] Média, he decided that he had to modify it slightly. Surrounded by many abandoned shop fronts, his installation was to set up in one of them and as nobody likes to stroll in roads with empty shop windows he wanted help this retail space find a new tenant.