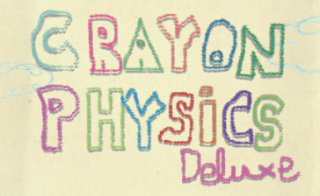 Similar toÂ Touch Physics, a game for the iPhone available in the AppStore for some time,Â Crayon Physics is a new addition to the games incorporating physics and drawing. What makesÂ Crayon Physics special is that instead of just focusing on the creation of objects, team behind the game have included the crayon theme in all aspects of the game. From menus, tutorials, settings to the actual gameplay and custom creation tool. It is great to see a game that is totally consistent, avoiding fonts not native to the theme and sticking with a single concept throughout. As a result, the game appears very much cartoon like. Watching introduction clips to each level creates a feeling that you watching a cartoon clip that shortly after invites you to take part. This also applies to the gameplay. Each level is quite unique andÂ whilstÂ you may find yourself re-using techniques you have learnt in the previous levels, the way you actually resolve the puzzle varies from level to level. You will also quickly discover that resolving the puzzle is not about finding the answer but being creative in the way you contribute to the physical environment with the objects you create. Some solutions are simple, someÂ deceivingÂ appearing simpler than they actually are and some are really challenging that you may need help of others (iPhone's screen capture comes in very handy).Â

All levels are all easilyÂ accessibleÂ from the main menu should you findÂ yourselfÂ wanting to venture into more difficult puzzles. The game also includes custom level creation tool. What is greatly missing is ability to share, over the web, you own creations and challenge friends to solve the puzzles you created. Â Nevertheless, a feature that will probably be addressed in the future updates, is currently a great addition to the game. It is also important to mention that the PC version of Crayon PhysicsÂ wonÂ the Grand AwardÂ in IndependentÂ Games Festival last year which is anotherÂ reassuranceÂ that you should mostÂ definitelyÂ buy this game. Priced atÂ $4.99 is slightly more than we would expect but it is evident that a lot of time and effort has gone into creatingÂ Crayon Physics.Â