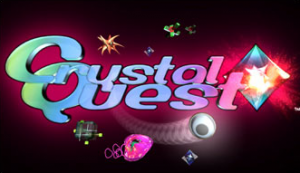 Crystal Quest, the mega-selling 80's retro space shooter now comes to the iPhone. For those that may remember, launched in 1987, Crystal Quest was the very first color game for the Apple Macintosh and it became an instant hit after its release.

iPhone release is exactly what you may remember from Crystal Quest. Traditional keyboard type navigation has now been replaced with touch, ie. point where you want your spaceship to go and tap to shoot rather as well as tilt controls like some other games. Controls take some time getting used to, but nevertheless is exactly what you would want inÂ Crystal Quest. With an infinite number of waves, your gem chasing will go as far as your skill. The iphone version also brings enhanced special effects and updated graphics with a modern look but retro gameplay.