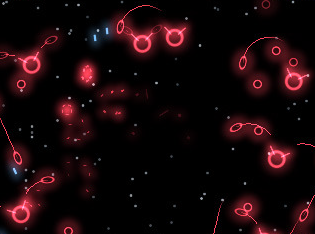 Defend! is a new shooter for the iPhone available in the AppStore. Aim of the game is to defend your base by shooting as many baddies as possible using tilt controls on the iphone. Interestingly, as you progress levels, the game becomes more visually seductive with more and more amoeba type objects occupying your screen. This is shortly followed by inevitable panic trying to defend your base. In addition, it is great to see developers use iPhone's multi-orientation, where the game adopts new orientation based on the level you reach. Shooting the attacking force is quite different in landscape mode than in portrait. You will find yourself having to rotate your iPhone more sporadically just catch all the aliens in the far ends of your screen. This is interesting and shows great potential but unfortunately the game does not go much beyond attacking enemies and you having to shoot them. There is a slight lack of achievements and awards in level progression. Before you know it, the screen will get so busy that it will be impossible to defend and the Game Over is soon followed. More balancing, optional tap controls, sounds, better designed intro screens and menus are missing from this game. Nevertheless, we hope to see more features in the new updates but in the meantime, Defend! is a great new comer to the AppStore and just maybe worth the $0.99 price tag.

One thought on “Defend! [iPhone]”