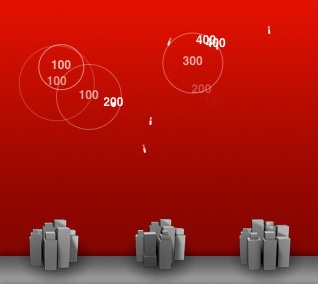 Red Sky is a new addition to the App Store in the defence style game category. As a commander it is your task to defend your cities against incoming missiles through 50 levels of increasing difficulty. Collect score stars to activate the four powerups that are unlocked one at a time at every 10th level.

What may appear as an ordinary shooter, once you have loaded the game and have had a go at few levels, it turns out that besides having to destroy the incomingÂ missiles, your attacks have to be planned and strategic. With every attack your arsenal is depleted slightly so endlessly shooting at the missiles will not help. Of course, if have depleted your arsenal a more precise hit is necessary but this is extremely difficult. Considering that it may take time to again replenish your arsenal your attacks need to be planned so you can take out as many incoming missiles as possible with a single hit. What is also great is that the explosions have a chain reaction effect so if you take out one missile it may also destroy another in it's proximity. Timing and location of your anti-air missiles play an essential part in you progress to next level.