Wobbly drawing machines with personality, light bulbs that pulse the syncopated rhythm of a hundred heartbeats, Beethoven’s Moonlight Sonata bounced off the moon—HOLO returns to the frontiers of twenty-first century creativity this spring. Here’s a preview and the journey so far:

“If anything, this magazine is an attempt to come to terms with the new normal,” is how the first issue of HOLO opined on our “hyper-connected, accelerating present that is a mere innovation cycle away from fantastical (or dystopian) fiction” in spring 2014. Since then we’ve seen the fall of the Berlin wall commemorated with a floating wall of light (8,000 balloons, each laden with LEDs) and the harrowing landing of the Philae probe on comet 67P (hurtling across space at 80,000 km/h) while our concerns about the erosion of privacy continue to grow. Clearly, the new normal isn’t slowing down anytime soon. On the contrary, given the brisk pulse of creative synergies that connect disciplines and offer glimpses of potential futures, it’s imperative that we slow down, reflect, and process the curious developments at the intersection of art, science, and technology once more. After months of hard work (and several noteworthy ‘Bookmarks and Milestones’) we’re proud to announce that HOLO 2 is available for preorder now.

What do we have in store? Some facts and figures: with 200 pages of premium print and about 30 contributors from a dozen countries, our second issue will be just as ‘heavyweight’ as HOLO 1. Together we are not only making sure that HOLO 2 is as smart, substantive, and special as you’d expect, but that we advance this magazine on all fronts. A more diverse cast of subjects and voices, more fleshed out sections, and an overall refined design are just some of the improvements that come with having an issue under our belt. Many of the highlights (bar a few surprises we’re saving for later) were posted on our all new website last week. Here, on CAN, we’d like to share a few more details and, in the spirit of a particular HOLO 1 piece, show some ‘underwear’.

200 pages, perfect bound, premium print (with some yet-to-be-revealed surprises)—HOLO 2 will ship this spring. Be the first to receive it! 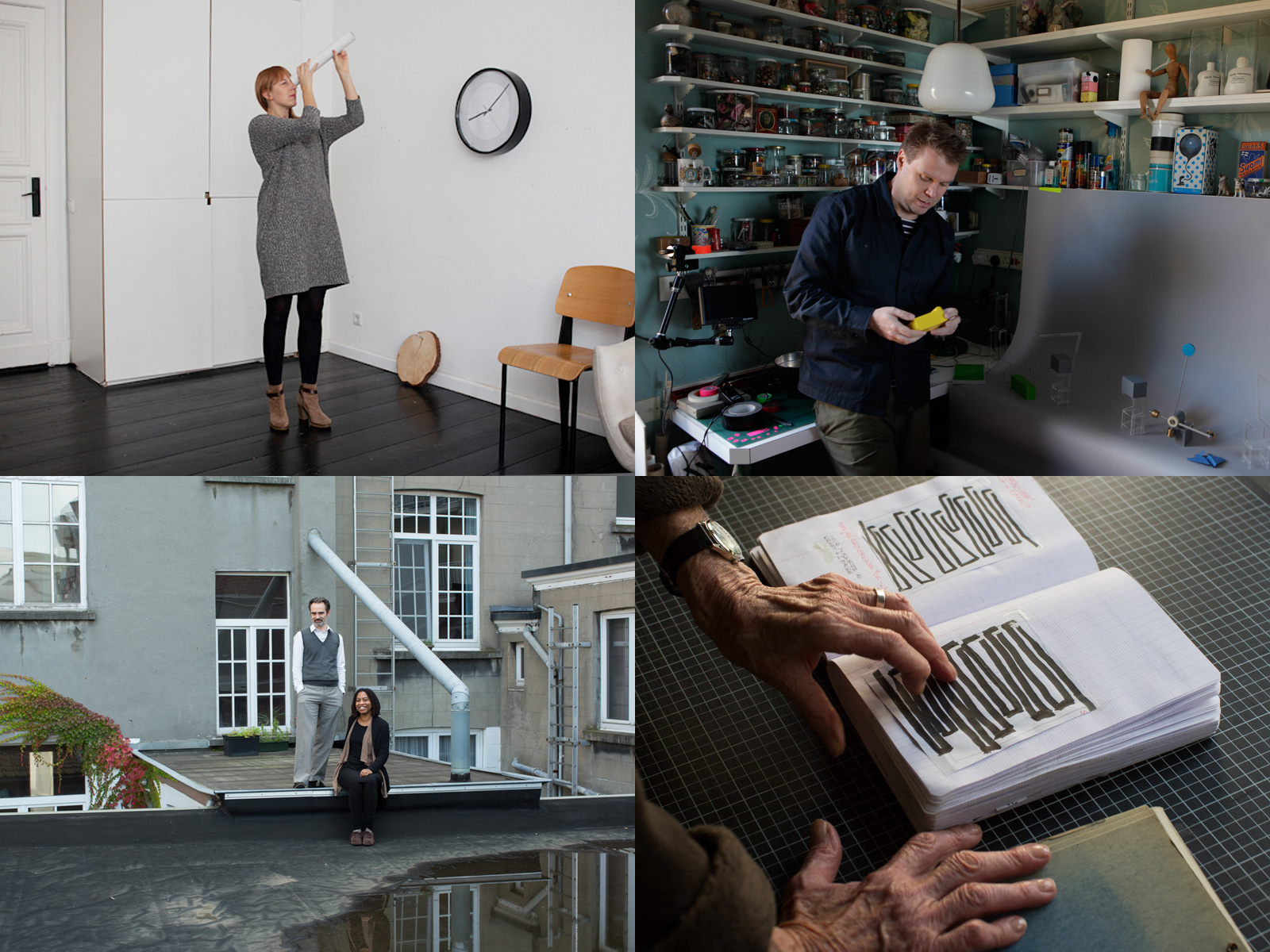 ↑ Inside (and outside) the artists’ studio: Katie Paterson, Timo Arnall, Tale of Tales, Vera Molnar

“I could potentially travel to Paris to see Vera Molnar, stay over, and then go to Ghent to shoot Tale of Tales on the way back to London. There’s a train from Ghent to London that is only 3 or 4 hours and no luggage restrictions—which is good for photographers!”

Wobbly drawing machines with personality, a roomful of light bulbs that pulse the syncopated rhythm of a hundred heartbeats, bouncing an encoding of Beethoven’s Moonlight Sonata off the moon—revealing the “faces, anecdotes, and personalities behind important work“ has been a HOLO mandate from day one. Our second issue will take you to Montréal, London, Paris, Ghent, Zürich, and Berlin where seven contemporary artists and designers who push the boundaries of twenty-first century creativity have opened up their world to our team of writers and photographers. From Rafael Lozano-Hemmer demoing a machine for capturing the last breath of revered musicians in his St. Laurent workshop loft, to Katie Paterson sifting through a collection of fossils leftover from a project that’s a million years in the making, to 90-year-old computer art pioneer Vera Molnar revealing her latest work over a mean brew of turkish coffee—each of these encounters shed light on careers that span decades and questions that have been around for millennia.

Diligently making art with computers since her first plotter drawings in the 1960s, Vera Molnar (HU)—at 90 years of age—is now at the height of her career.

A virtuoso of performance where sound and image intermingle, Ryoichi Kurokawa (JP) explodes the natural world and reconstitutes it digitally.

A former creative director at BERG, Timo Arnall (NO) makes films and prototypes that reveal the infrastructure and networks that underpin everyday life.

A glacier’s meltwater, a rock from the moon—working with primordial materials, Katie Paterson (UK) ponders our connection to the cosmos.

See our all new website for a (still growing) list of writers, photographers, artists, and designers that are contributing to HOLO 2—great talent all around!

“I met with Jürg again on Saturday and received a wealth of information. He showed me the two versions of Viktor he’s working on to take to San Francisco next month for the SFMOMA and The Long Now Foundation. It was very cool.” 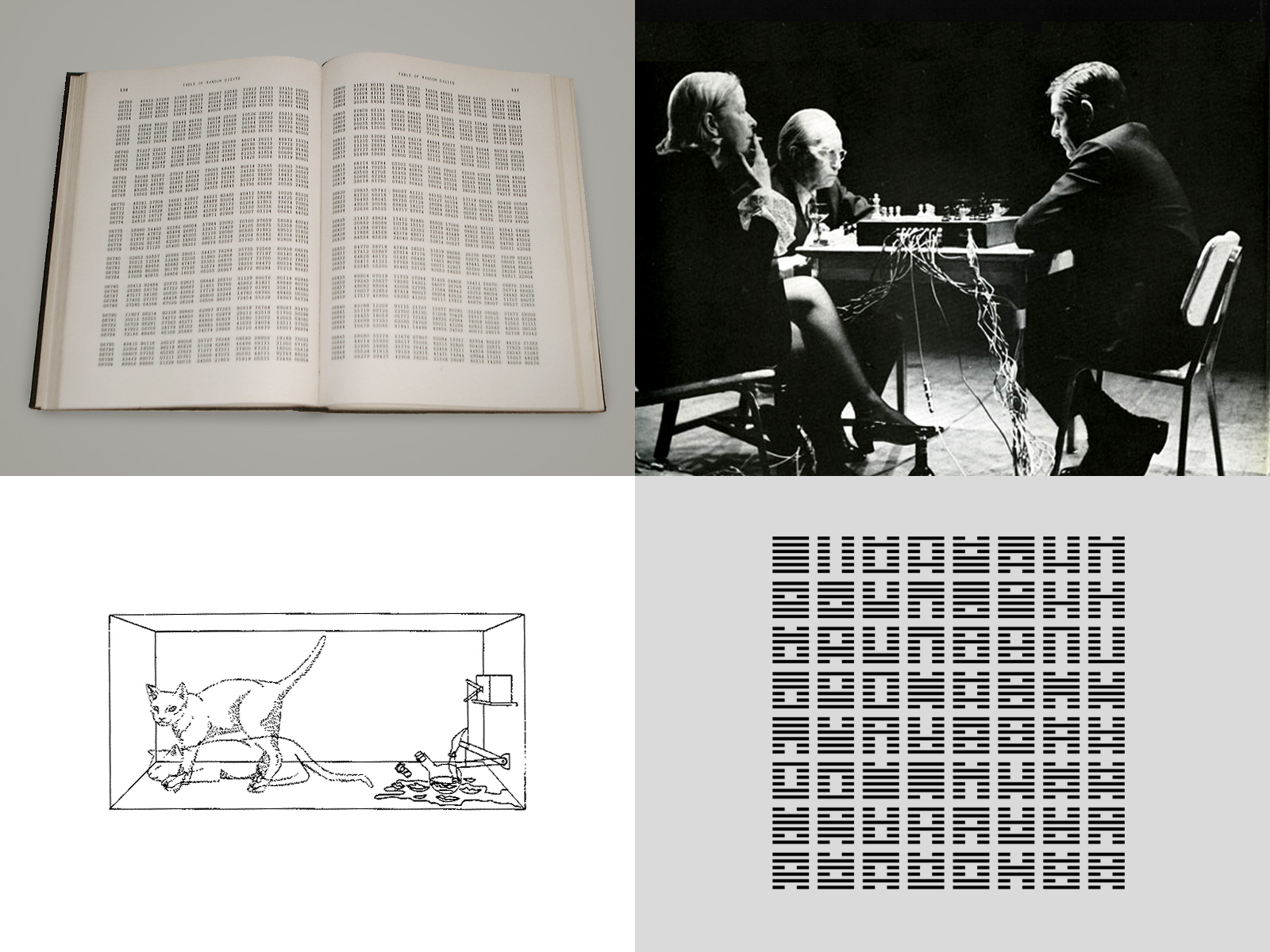 After investigating emerging representational techniques and paradigms (‘new perspectives’) in HOLO 1, we dedicate our second ‘ideas’ section to a topic close to the heart of computational arts, one with widespread cultural implications: randomness. Dramatic market fluctuations, emergent storm systems, unforeseen sequences of global events—chance shapes the world as well as our everyday experience. We’ve enlisted a stellar cast of contributors to consider randomness and trace related idiosyncratic histories through a variety of formats. From unfurling the backstory of RAND Corporations’ 1955 book A Million Random Digits with 100,000 Normal Deviates, to analysis of 20th century art that employs chance, to a survey of projects that incorporate weather and natural phenomena, we have a wealth of eclectic material to share.

“The more I read on the subject the stranger it got. Random number generation both old and new is full of secrets and paradoxes.” 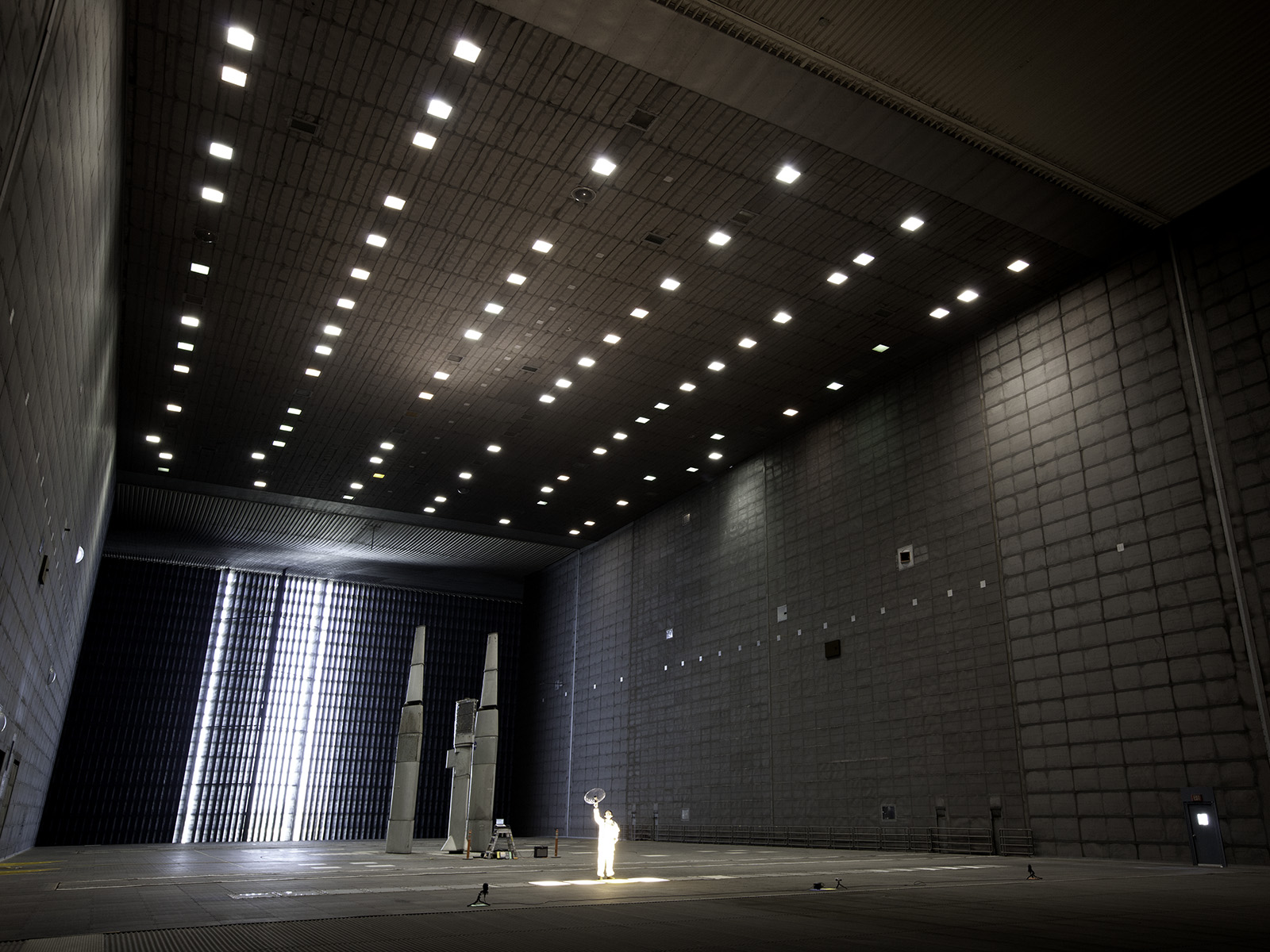 ↑ SETI artist in residence Charles Lindsay (US) ‘tuning’ into the cosmos

Design and anthropology researcher Georgina Voss has conducted a rigorous investigation of the recent wave of artist-in-residency programs at leading scientific institutions (CERN, SETI, The Smithsonian, etc.), interviewing both program instigators and the artists that have spent time developing projects alongside scientists.

On another wavelength altogether from most commentary on the soon-to-be-released hardware, is BLDGBLOG author Geoff Manaugh’s critical reflection on the Oculus Rift. Our invited spatialist peers into his headset to parse VR’s future as a medium for mixed-reality experiences that alter how we see and engage the world around us.

“I remember from my trip to CERN earlier in the year, being very taken by the scruffy worktops, old photocopied and laminated signs, and other very mundane office ‘debris’ scattered around the place.”

A (not so) random cover

Many people have told us that HOLO 1’s cover concept won’t be easy to top. We agree. So in order to try to equal the Processing-driven X-Ray character mapping system we developed in collaboration with studio Moniker (that “made every letter count”), we enlisted one of the world’s most thoughtful computational designers. Karsten Schmidt, based in London and well-known for his work with the generative identity for the V&A’s 2009 exhibition Decode, the wildly popular Processing library toxiclibs, and the recent participatory co(de)factory produced for the Barbican’s Digital Revolution, has created a genetic programming system that (semi) harnesses randomness to ‘breed’ our cover. “It dynamically generates random programs which have to evolve to solve a given problem as well as possible, but have no knowledge about the data or environment they act on or in.” The challenge, Karsten says, was ensuring that all possible genetic operations like mutation and crossover/breeding don’t produce corrupt code and yield a balanced fitness function, that measures success as well as allow temporary negative mutations (that can ultimately overcome evolutionary plateaus). Sound complex? Wait until you see the results.

This sprawling inventory of content definitely makes HOLO 2 “more a book than a magazine,” but that’s not all. Our procedurally generated fold-out timeline STREAM, for example, once again compiles critical art, science, and technology moments from the past six months in a captivating collage. We also have several exciting surprises in the works, that we won’t share just yet. Trust us: between now and the launch this spring there’ll be plenty of announcements and previews to whet your appetite. Stay tuned and pre-order now!

200 pages, perfect bound, premium print (with some yet-to-be-revealed surprises) – HOLO 2 will ship this spring. Be the first to receive it!

Why pre-order? HOLO is 100% independently published and quite expensive to produce. Your preorder helps us estimate demand, cushion production costs, and invest in our contributors, content, and overall quality. If you liked HOLO 1 and are interested in 2, please consider pre-ordering—it really helps us. Thank you :) !

Attention HOLO subscribers and Kickstarter backers: make sure we have your current address on file. If you have moved since your order (or Kickstarter pledge) or anticipate a move this spring, please update your mailing info via orders@holo-magazine—and be sure to include a phone number.

To conclude, we’d like to acknowledge the support HOLO has received from a growing roster of prestigious media art festivals, research institutions, and creative studios thus far. Our partners, as we call them, have not only helped us bring this magazine into the world. Together we develop forward-thinking collaborations that foster exchange, discourse, and education within our growing international milieu. The partner line-up for HOLO 2 is already looking equally stellar: we welcome back Tokyo’s prolific auteur collective Rhizomatiks, whose brilliant artist-researchers had our back from the start. We also look forward to work with our new partners: now in its 16th year, Elektra festival is posed to once again showcase cutting edge audiovisual performance and installation in Montréal; FRAMED* is an exciting new hardware platform that promises to be no less than an interactive canvas for the twenty-first century; Finally, London’s onedotzero has brought together art, entertainment, and technology in commissions, productions, and events for almost two decades. More HOLO 2 partners will be announced in the coming weeks. 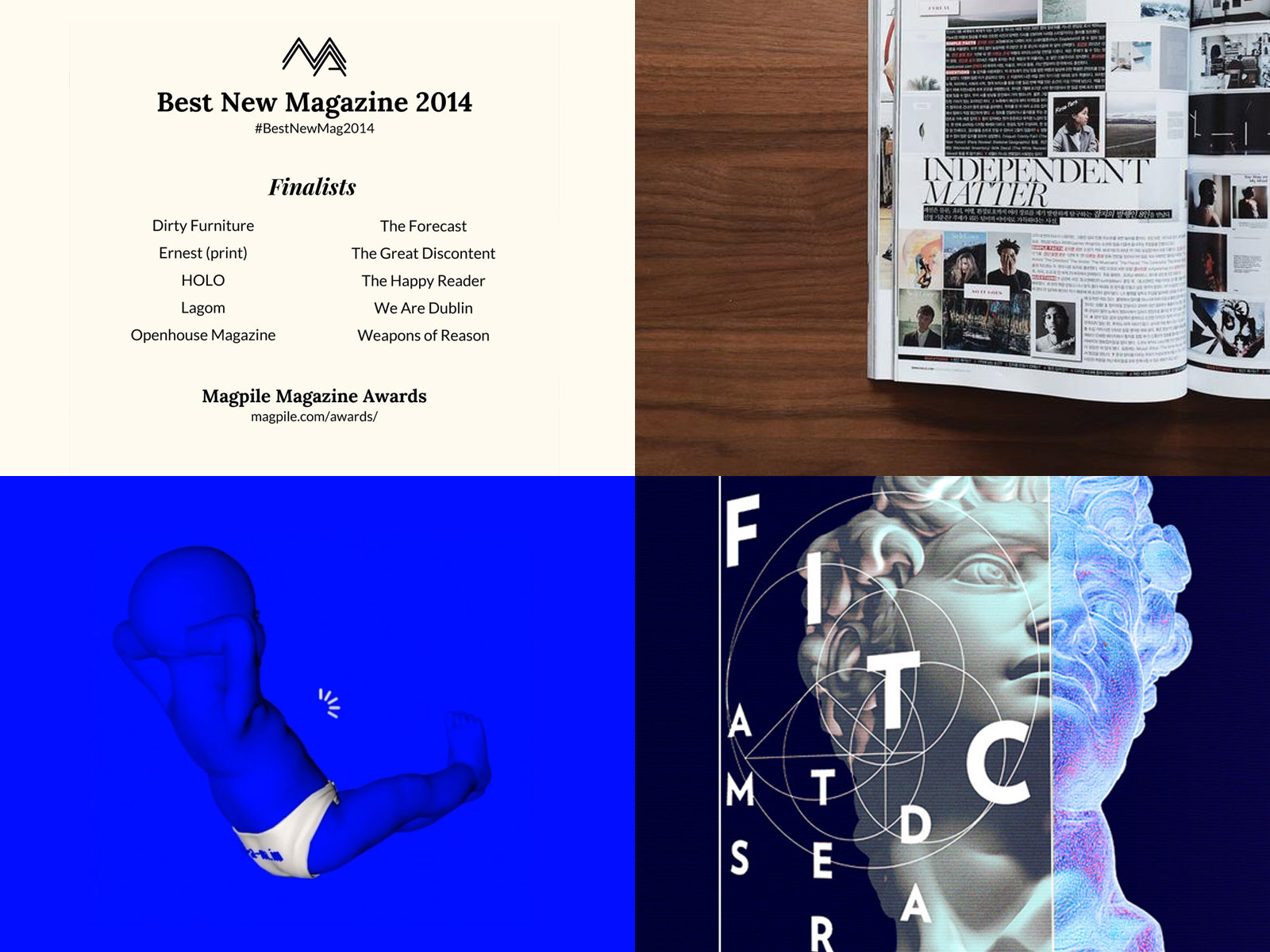 #BestNewMag2014: We were extremely proud to see HOLO longlisted alongside innovative and exciting periodicals like Dirty Furniture and The Great Discontent for Magpile’s recent Best New Magazine of 2014 award—congrats to Weapons of Reason for taking home the prize.

Independent Matter: Cereal, Cherry Bomb, Adult and… HOLO? The February issue of Vogue Korea has a feature on seven independent magazines and we are one. If you manage to get your hands on a copy you’ll find a (rare) team shot of us outside Eyebeam in NYC (on the launch night of HOLO 1) and our waxing poetic on the significance of our title.

IAM IN: Our own Filip Visnjic and Alexander Scholz are headed to Barcelona in late March for Internet Age Media Weekend, an event that promises to “connect the creative ecosystem that is redefining the future of media.” They’ll be discussing our work—in print and on the web—alongside speakers like Offscreen magazine’s Kai Brach and Julia Kaganskiy from The New Museum’s incubator NEW INC.

Design. Technology. Cool Shit.: If you are headed to FITC Amsterdam in a few weeks to hear great speakers like Quayola, Marius Watz, and Sougwen Chung, be sure to keep an eye out for HOLO—copies of our first issue will be on sale at the registration booth on Monday and Tuesday afternoon.