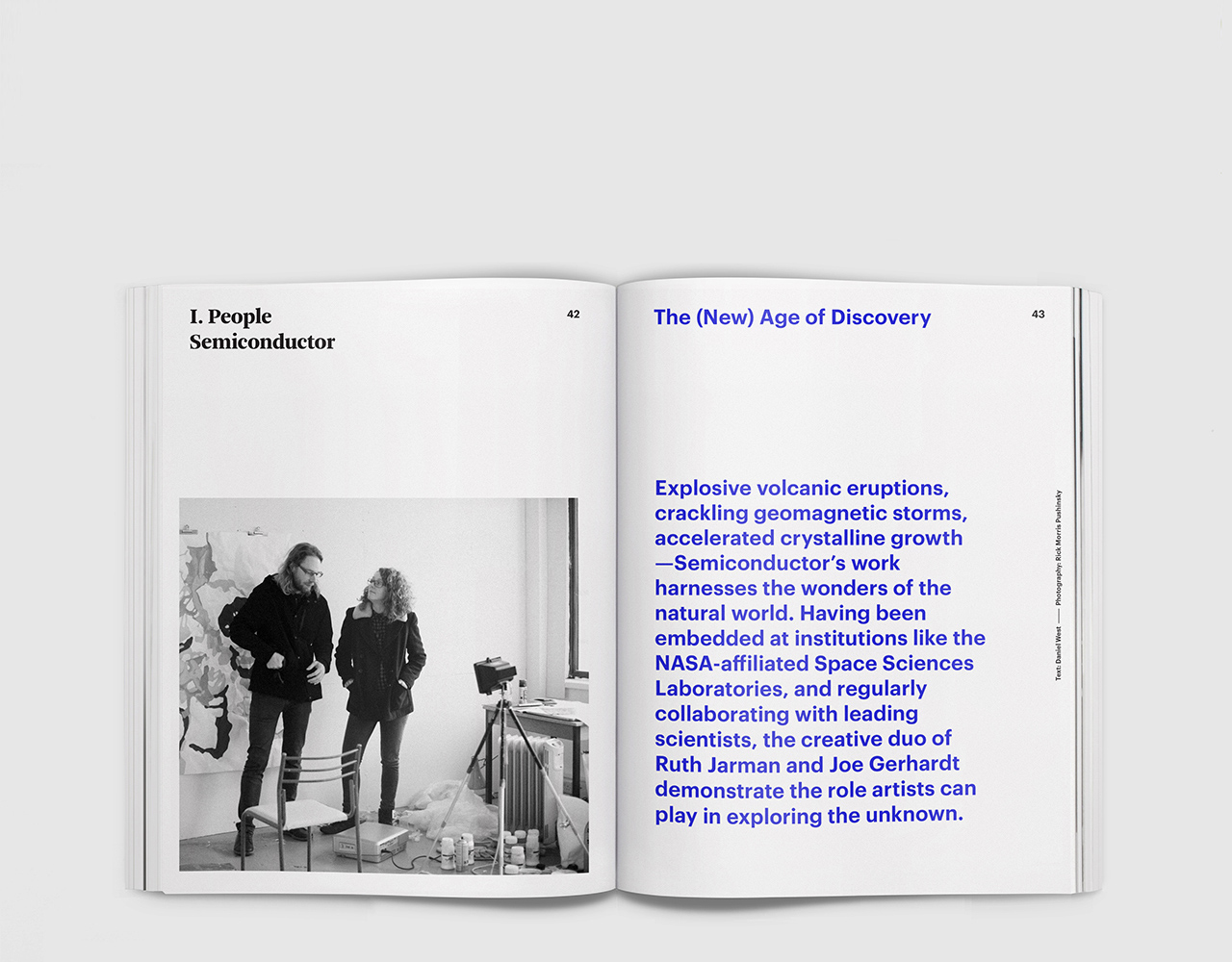 226 pages, 34 contributors from 8 different countries, 12 months of blood, sweat and tears – the first issue of HOLO magazine, CAN’s exciting print spin-off that is “more a book than a magazine,” is near. And it’s bigger and better than what any of us could have hoped. Kickstarted in late 2012, HOLO set out to go beyond CAN’s daily project feed, step into the artist’s studio and uncover “the things we’re missing from the web: the faces, personalities and anecdotes behind important work”. A year of full-on, globe-spanning production later, we’re proud to say that HOLO is so much more than that. A unique blend of editorial formats, voices and ideas, HOLO captures what we feel no other print or web publication does: a carefully curated, comprehensive and people-centric snapshot of the creative dynamics at the intersection of art, science, and technology.

In advance of HOLO’s official launch in the coming months we are delighted to share an extensive preview of the magazine’s inaugural issue – pre-order your copy now to get one of the remaining limited edition packages. 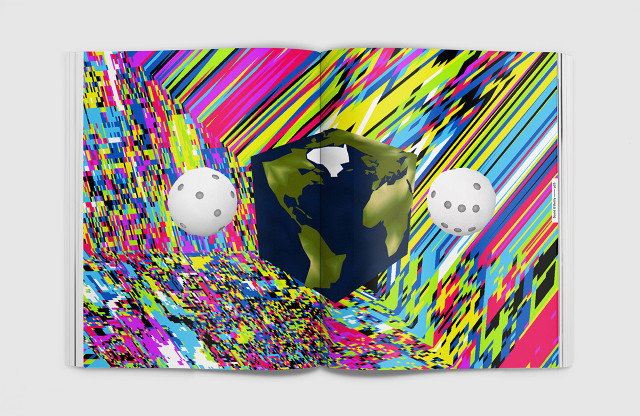 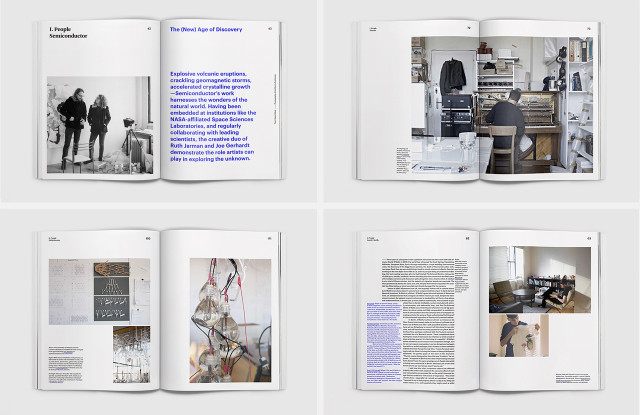 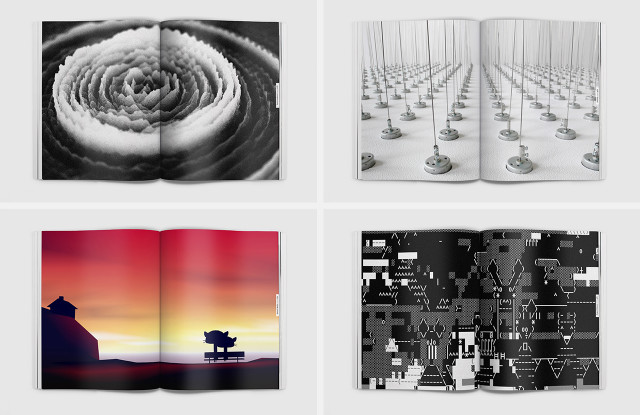 HOLO features are 12 to 18 pages and each profile is a collage of story, intimate portrait and studio photography, monograph-like project documentation, and a world of supplementary field notes. Beyond getting up-close and personal with our subjects, we catalogue their work with extended sequences of double-page ‘project snapshot’ spreads and a dense grids of selected works follow each profile to provide additional contextual information. Between the varying image sizes, metadata, and tangential notes, HOLO provides many ways to read or browse the practices of our featured artists. 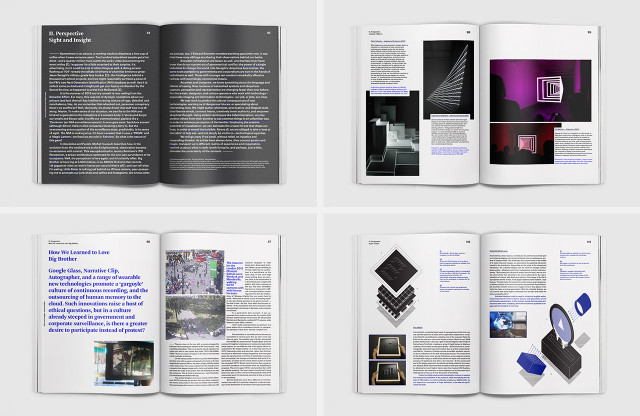 Beyond its mandate to uncover faces, studios and practices, HOLO is also a forum for timely analysis and commentary. Taking up a third of each issue, the magazine’s PERSPECTIVE section invites artists and thinkers with niche expertise to explore a thematic topic in a variety of editorial formats. The inaugural edition is entitled ‘New Perspectives’ and asks how are emerging technologies changing the way we see and understand the world? Artist and educator Golan Levin leads off with a provocative introduction that considers the difference between ‘sight and insight,’ setting the stage for James Bridle and Greg Borenstein’s astute essays on surveillance and lifelogging, and the role of debug views in digital art. ‘New Perspectives’ also emerge in an isometrically-illustrated guide to emerging display technologies produced by Paul Prudence and Axel Pfänder, a photo essay on projection mapping onto sculptural forms with accompanying commentary by Dylan Schenker, meme-spotting and incisive analysis by Mitchell Whitelaw, N O R M A L S’ diagrammatic vignettes that speculate the most popular ‘substitute realities’ from two decades in the future, our interview with Disney Principal Research Scientist Ivan Poupyrev,  and more!

HOLO’s scan of the art and technology cosmos would not be complete without investigating key nodes in the network, the tools we use, and the innovation news cycle in between issues. In GRID, our section dedicated to galleries, institutions, and media labs, we talk to Wolf Lieser from the pioneering DAM GALLERY about his 20+ year career in digital art. Additionally, a special 20 page retrospective booklet has the gallerist reminisce about ten selected works that shaped the gallery’s first decade—from a 1967 plotter drawing by Frieder Nake to a hand drawn QR code portrait created by Aram Bartholl in 2012.

Lastly, HOLO concludes with STREAM, an art and technology fold-out timeline of significant events, people, projects, and tools that got us talking while this issue was in development. From the Voyager 1 space probe leaving the solar system to the massive lines to experience Rain Room at MoMA—it’s all logged in STREAM. 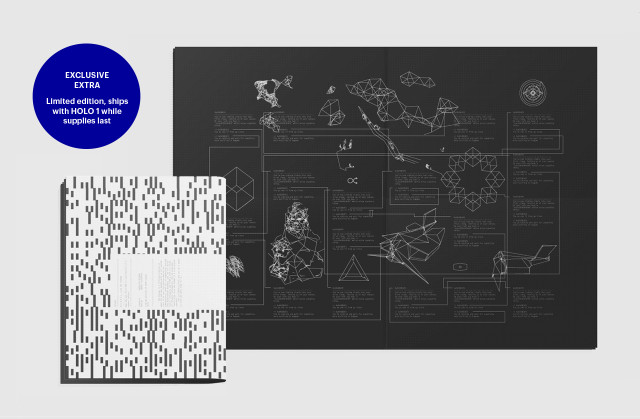 BONUS GIFT: Beyond fold-outs and booklets, we are excited to offer a limited-edition mini-publication along with HOLO. N O R M A L, like a first dip into the Stream is a RPG storybook that speculates future mutations of the web. Created by ‘New Perspectives’ contributors N O R M A L S, the booklet presents a near-future web that is “a maze of information so vast that navigating through it is best described as an existential journey.” Their illustrated ‘choose your own adventure’ game is an opportunity to explore a dizzying and ephemeral media labyrinth – in print. We only have a few hundred copies of this bonus gift remaining, so order soon if you want to ensure that you receive one with your copy of HOLO.

Editorially, HOLO inhabits the grey area between book and magazine quite comfortably. To strike a visual balance between the two we worked with zmyk, the newly found Hamburg-based studio of editorial design veterans Jan Spading and Oliver Griep. With many of Germany’s most influential magazines under their belt, the duo’s unique take on HOLO combines both book and magazine design elements, two timeless typefaces (Graphik Semibold and Arnhem Black) and the spot color Pantone Reflex Blue. While maintaining a firm grip on the magazine’s various sections, formats and tempos, zmyk’s design proved flexible enough to also allow for distinguished guest artists/designers to punctuate this issue: the image stream that spills through HOLO’s STREAM timeline was generated procedurally on-page with the help of Ludwig Zeller and Ted Davis. The makers of Basil.js, a computational design plug-in for InDesign, developed a one-off sorting script to arrange six months’ worth of images from CAN. For the magazine’s cover – which we’ll reveal soon! – we turned to Amsterdam-based studio Moniker. Well known for their rule-driven, conditional design practice, Luna Maurer, Jonathan Puckey and Roel Wouters proposed a design concept that considers every single letter in the magazine. 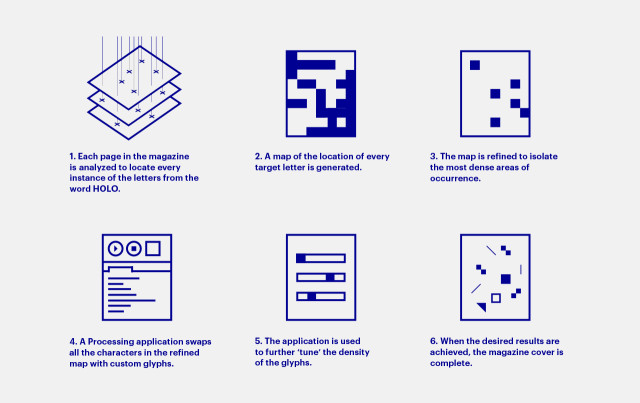 And finally: HOLO wouldn’t be possible without the enthusiasm and support of several distinguished sponsors. We’re proud to announce the following arts organizations, festivals, software developers, and creative collectives as official PARTNERS of HOLO’s first issue. BIAN, C4, Eyebeam, FITC, InterAccess, rhizomatiks, ZKM – each of these esteemed innovators and incubators are represented with a full page application of Moniker’s cover process, visualizing all the letters in their names throughout the entire issue.

There is no doubt it has taken us a long time to get this to point, but if the numbers below are any indicator – it was time well-spent. We’re truly excited about the first issue of HOLO, we feel we have developed an editorial formula that will do the people and organisations working at the intersection of art, science, and technology justice – we hope you’ll join us as CAN expands into another medium. You can order a copy or subscription by clicking on the image below. 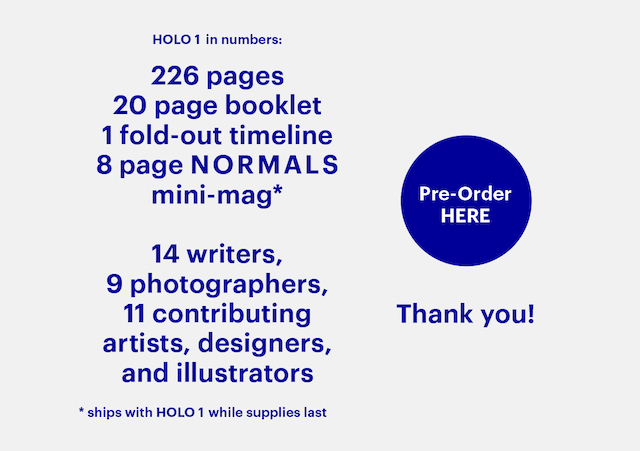