Best Practices in Contemporary Dance is a queer form of conversation between technology and bodies. Since April 2020, the beginning of 1st COVID-Lockdown, Jorge Guevara and Naoto Hieda meet weekly online to #practice for an hour: to distort and alter videos of themselves and each other, namely, in the pixel space. They do not define what tools and elements are to be used; thus the practice is improvisational and performative. It may include spontaneous reading, writing, eating or body painting. The project is not intended for perfection; the practice itself is the outcome and the objective is to foster a fluid, queer form of conversation where technology and bodies exist without hierarchy and functionality.

The artists promote the use of open and free software. Most of the visuals are generated and modified by Hydra, a live-coding environment created by Olivia Jack. Videos are streamed on LiveLab, a video-call platform for performing arts created by CultureHub. Sessions are recorded and streamed by OBS Studio.

It is important that we strictly keep the limit of 1 hour (sometimes 2 hours) to finish the practice; once the practice starts, there is no going back. This way helps us to dissociate our performative identities from ourselves to be free of prejudice and judgements of ourselves – as human beings within social structures. We call this method sandboxing referring to the term used in software development.

Another important aspect of the practice is a #chat – a casual discussion lasts for roughly an hour between the duo to reflect on and theorize the practices. The topic includes conceptual ideas such as self-dissociation and concrete ideas like the stage design of the desktop where the cursor, windows and tabs are the actors. In the past chat sessions, there have been invited guests such as Joana Chicau (designer), Flor de Fuego (media artist), Liza Futerman (dancer), Ulrike Kuchner (astrophysicist) and Jo Caimo (visual artist). All the practice and chat sessions are recorded to create a massive online archive on YouTube that can be revisited.

There is a history of dance-tech since the 20th century from Oskar Schlemmer to Merce Cunningham and Nam June Paik to today’s notable figures such as Mária Júdová, Choy Ka Fai, Mio Loclair and Raphael Hillebrand, to name a few. Nevertheless, the artists believe that the field of dance-tech is still in its early days. Rather than using technology as a service for a dance piece (or vice versa), coders, artists, dancers and choreographers need to develop a vocabulary to accommodate technological flesh and embodied code as a practice. Then, dance-tech will no longer be an interdisciplinary collaboration but become a discipline in itself. By publishing practice and chat videos, they contribute to a wider audience in the community to stimulate practice-based approaches.

Furthermore, the artists have started to experiment with medium outside digital videos. Recently, Jorge has published a magazine-thesis about the practices, and Naoto has exhibited banners and posters in public spaces based on the screenshots of the practices during KHM Open.

The work has been presented at PAF (Performing Arts Forum; Saint-Erme, France), NODE20 (Frankfurt, Germany) and ImPulsTanz (Vienna, Austria) among other venues. The next sharing is planned at NEW NOW (Essen, Germany) on September 18th, 2021.

Jorge Guevara is a Colombian artist based in Brussels whose work lies in the intersection of interface technologies and sociology, with a strong body-oriented approach. Coming from a Master’s degree in Contemporary Dance he studies Multimedia & Communication Technology, with a focus on live visuals, generative motion design and digital interfaces. His choreographies propose playgrounds where the body in time-space becomes a source of non-binary knowledge. By opening up access to information he attempts to deconstruct the hierarchical structures that exist in the art world. His platform Designing Art focuses on the translation between art direction & its technical implementation. He creates frameworks with a responsive/interactive/relational aspect where the subject of attention is the public, where the people come together. His focus is on decolonizing knowledge where the body is a source of healing.

Naoto Hieda is an artist enrolled in Diplom II at Kunsthochschule für Medien. They question the productive aspect of coding to speculate its new form, namely post-coding, through neurodiversity and live-coding. 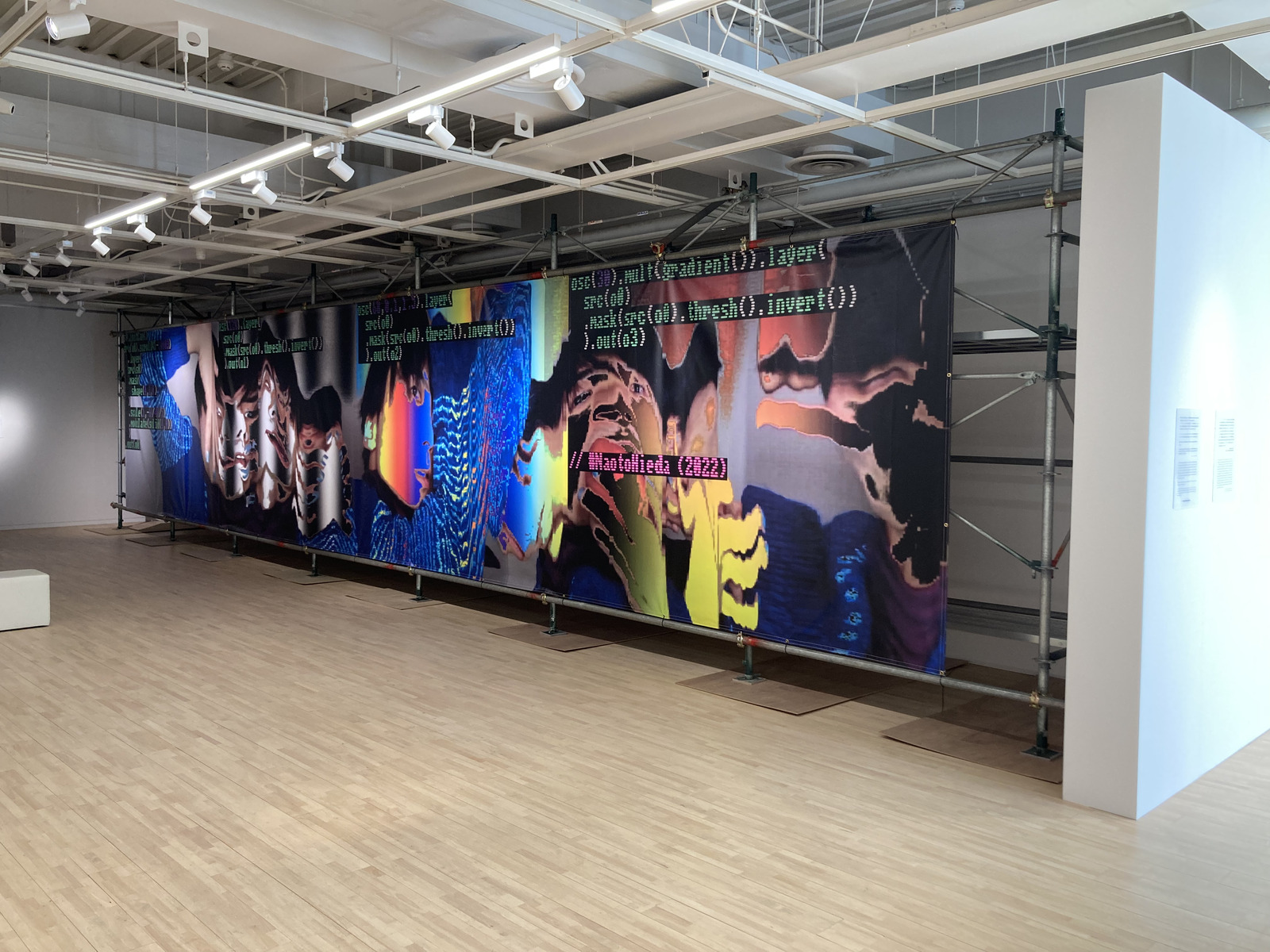 #NaotoHieda – live-coding on a construction banner

#NaotoHieda is an artwork around a computer program and a body. A screenshot of a performance using the artist’s body and a custom-made web editor for live-coding is printed as a large construction banner. Currently, it is on view at a group exhibition at Pola Museum Annex in Tokyo, Japan from February 11 to March 13, 2022.