Push buttons, sliders, switches and dials—we use such controls everyday and everywhere, but we barely notice them. Expressive Tactile Controls is a research experiment with a series of controls that are augmented by giving human personalities. What if each control had a unique personality and they could express its emotion only through haptic feedback? How could our interaction with controls be improved?

The research approached the question by constructing a series of button prototypes able to express themselves with various tactile and kinesthetic feedback according to the interaction between the user and controls.

a.Timid
The Timid button goes down ahead when the user’s fingertip comes closer to the top of the button. The top of the cap has a proximity sensor which detects the location of a fingertip at regular distance. The button quickly hides from any approaching touch using a linear actuator.

b. Impatient
The Impatient button is a highly sensitive button that actuates rapidly with only a small amount of force or touch. It is built with a motorized slide potentiometer which generally used for audio mixing and fabricated with a customized button knob.

a. Stubborn
The Stubborn button was designed to offer resistance to be pressed, by demanding a variable actuation force from the user. It was built using a slotted link mechanism (also known as Scotch Yoke mechanism) using a servo motor that generates tension from an attached spring. While it operates, the rotary encoder detects the movements of the button position as a precise input knob.

e. Excited
The Excited button has a cap which can pop up when a user pushes it. The button uses a Cherry switch and a solenoid to trigger the pop. As a result, the cap dislocates the original position and the Excited button will not be able to be pressed anymore.

Dashboard Application
After building the physical prototypes, I developed a control board application with a dashboard to observe constant input and output values of haptic activity and to assign individual tactile effect conveniently. The software was written in JavaScript/HTML/CSS, p5.js and Arduino.

These line graphs visualize the position of each button. For example, the Timid button has lots of hesitance on the graph as the user’s fingertip comes closer to the top of the button, and then it goes down deeper. Moreover, the user can utilize the values from the program to operate variable applications such as lighting, musical instruments, or game controllers. 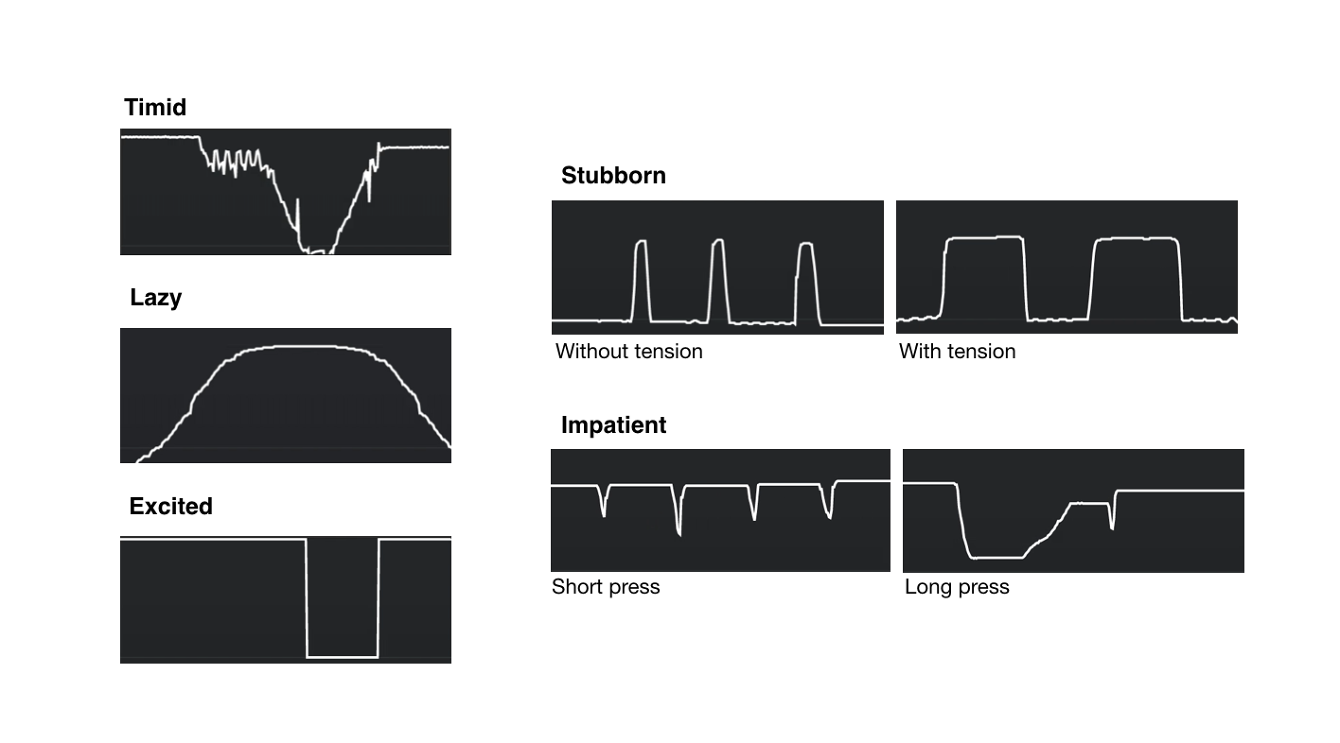 The Expressive Tactile Controls can be used for a variety of contexts and applications. For the first experiment, I explored two example scenarios with lighting.

Depth & Brightness
Using the linear position feedback from the motorized slide potentiometer, the user can adjust the brightness how deep they pressed like a dimmer and also turn on and off like a regular switch. When pressed it quickly, the bulb turns on with a preset brightness setting. However, if the user needs a brighter setting, they push more to find the best light setting.

Energy Consumption
Using the Stubborn button, turning on multiple light bulbs will require stronger force than turning on a single light bulb. It will let the user feel how much they are using the energy when pressed it immediately.

If you have any question or requests, please let me know with email (gkdus1988@gmail.com). Thank you!