From June 4th to July 4th, The Grey Space embarks on a large-scale experiment entitled Perpetual Beta. In close collaboration with a group of makers and the public, a new form of presentation is explored based on the principles of open source. The result is an exhibition of work-in-progress, where the public is invited to take a look, participate and contribute.

The Grey Space will be taken over by makers who critically embrace technology: interactive design studio Moniker by Luna Maurer and Roel Wouters, design studio for interactive media RNDR, and maker and curator Carolien Teunisse, who forms an occasional duo together with maker, designer and technologist Sabrina Verhage.

Collective Works (Karin Mientjes and Peter Zuiderwijk) designed the physical exhibition space, created a modular support structure – in collaboration with Refunc architects – and developed their project ‘From 1.50 to 1.20’. The online counterpart of the project will take place at perpetualbeta.online – an environment made in Common.Garden (developed by Constant Dullaart) – a virtual space where visitors and makers can meet each other and in which all documentation of Perpetual Beta is recorded, collected and broadcasted by the OUTLINE collective.

Moniker presents ‘Identity Training Facility’. In this project they will work on the development of a film in which the two main characters communicate through a digitally enhanced, language filtering hand fan. They will work on various aspects of the project via scale models, silicon casting, and the writing of dialogue together with experts and peers.

RNDR explores the potential of a digital version of “the designer”, an AI designer. They will set out on a series of experiments using their own experiences and studio as a starting point. Based on the data they have developed, they will create a series of bots that can perform rudimentary design tasks. Every week these AI bots are given new assignments, in order to investigate the possibilities of these techniques.

In ‘(Un)natural Augmentations’ Carolien Teunisse and Sabrina Verhage depart from an eco-centric perspective. Based on lichens that can be found near The Grey Space, they will develop a virtual growing moss. Lichens respond to changes in air quality, thus reflecting the state of our environment. Visitors are also invited to collect lichens and add them to this new virtual form. The result is born out of a close and growing inter-species collaboration between lichens, makers and visitors.

Friday 4 June – Perpetual Beta [encounters in open space] – Opening
The Grey Space will introduce the makers of Perpetual Beta. This hybrid event moderated by Marijke Cobbenhagen features guest lectures by journalist and writer Sanne Bloemink and artificial intelligence and media philosophy researcher Arif Kornweitz. Visitors can experience the event both on perpetualbeta.online and The Gray Space’s terrace, in the form of a silent symposium with headphones.

Thursday 1 July – Thursday Dinner Session
Every Thursday a guest chef prepares an affordable meal and DJs provide a musical outline. In the meantime, guests can experience the Perpetual Beta exhibition.

The Grey Space is a space for fundamental creativity in The Hague’s city centre. The Grey Space is a project space, music and performance stage and a cafe. It is an open laboratory for makers and a presentation space for the 21st century, where art and digital culture merge with science, technology and philosophy in an anti-disciplinary state. Projects are tested and gradually made visible to the public, which can lead to unexpected outcomes and adventurous visits.

Perpetual Beta is made possible by Creative Industries Fund NL and The City of The Hague.

Many thanks to our partners: Common.Garden, OUTLINE, o, o, radio, The Hague Contemporary, We Are Public, iii, Creative Coding Utrecht, Netherlands Coding Live. 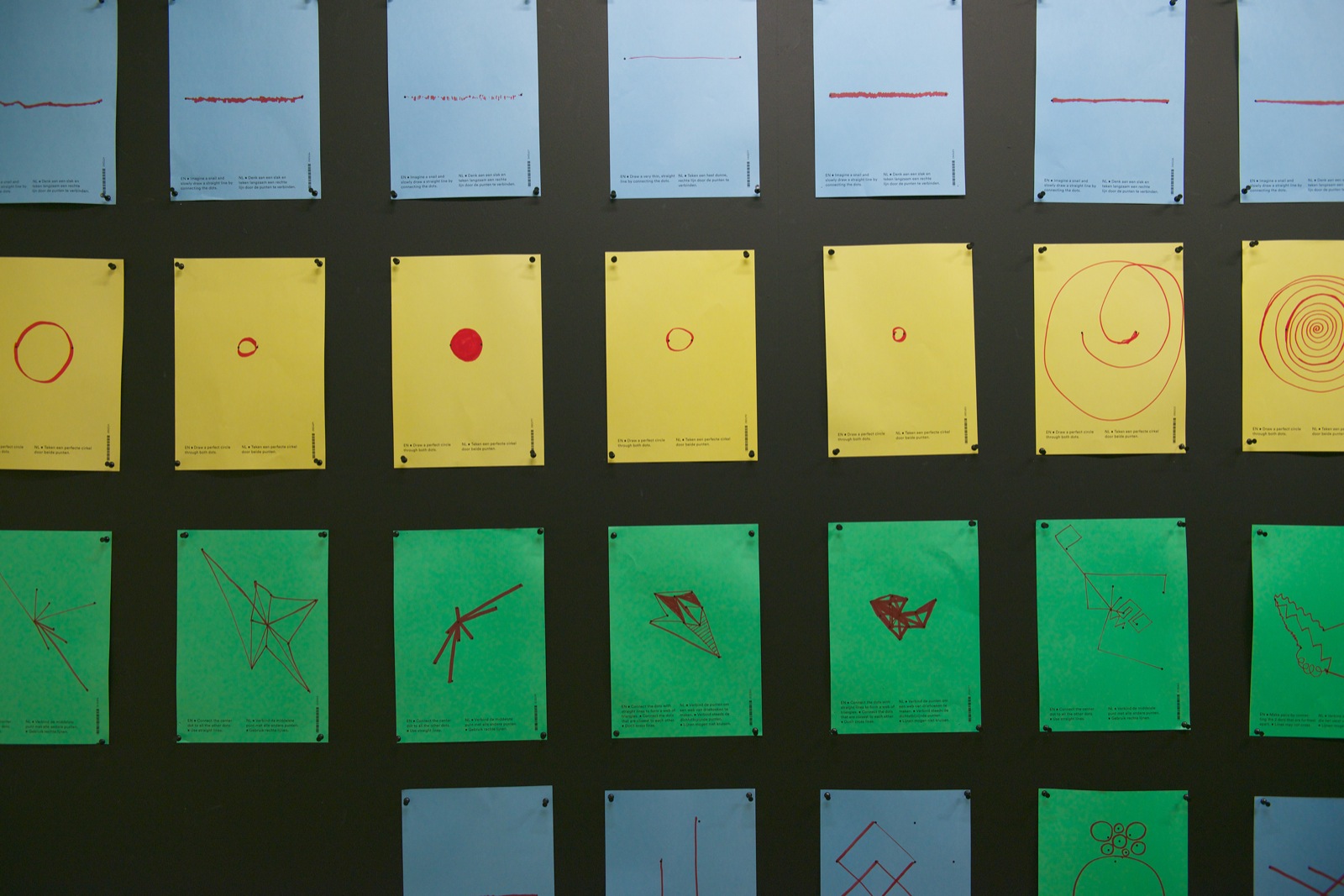 Your Line or Mine – Crowd sourced animations at the Stedelijk Museum

‘Your Line or Mine’ is an interactive installation in the Stedelijk Museum comprised of three continually changing crowd sourced animations drawn entirely by the museum’s visitors.