SMOG SEASON is a workpiece that pulled PM 2.5 data to satirically compare the bad effect of cigarette smoke on the human body with current Bangkok air pollution by expressing through pictures and warnings of a cigarette label. SMOG SEASON invites audiences to realize the bad effect of PM 2.5 they are living in and to start questioning about the problem. Nowadays people start to misunderstand and try to adapt themselves to stay with the problem just like it is a normal weather condition. If we count the problem of PM 2.5 as a season, it would be a very bad monsoon that people must suffer and endure to pass. Air pollution is considered severe and affects health in the long run. This should be solved seriously (reference).

Referring to research titled Air Pollution and Cigarette Equivalence by Richard A. Muller and Elizabeth A. Muller had shown that smoking 1 cigarette is equivalent to putting PM 2.5 into your body for 22 micrograms per cubic meter per day (reference).

“What do we breathe in?” The work wishes to expand on the point of PM 2.5 in Thailand. It is expanding into a chronic problem that is not solved. The work wants to stimulate the thoughts so that everyone returns to look at this problem seriously and question on the right to receive clean air for breathing. The problem that happened is hard to control and might not be able to solve easily. It requires cooperation from the government and private sector. The interesting thing is that this problem does not occur only in Thailand. Many countries around the world are facing air pollution problems, and people must directly take on the burden of the consequences.

Pictures and warnings on cigarette labels had been used to design and create animations. SMOG SEASON consists of 80 cigarette packs, attached to 5 circular bases, and arranged from the bottom up to the top. All parts are driven by motors, light sensors, 7 segments, LED, and Arduino.

The work is designed to be interacted via smartphone. Audiences simply scan QR code, choose the preferred level of smoke, and put it to the sensor.

The light value from the smartphone will pull the recorded statistical data of PM 2.5. Then order the motor to spin the circular base and blink the light at 18 FPS, so the pictures on a cigarette pack would seem to be moving. LED 7 segment shows date, time, and value of PM 2.5 according to the data received. The whole system is developed by programming and controlled via Arduino. 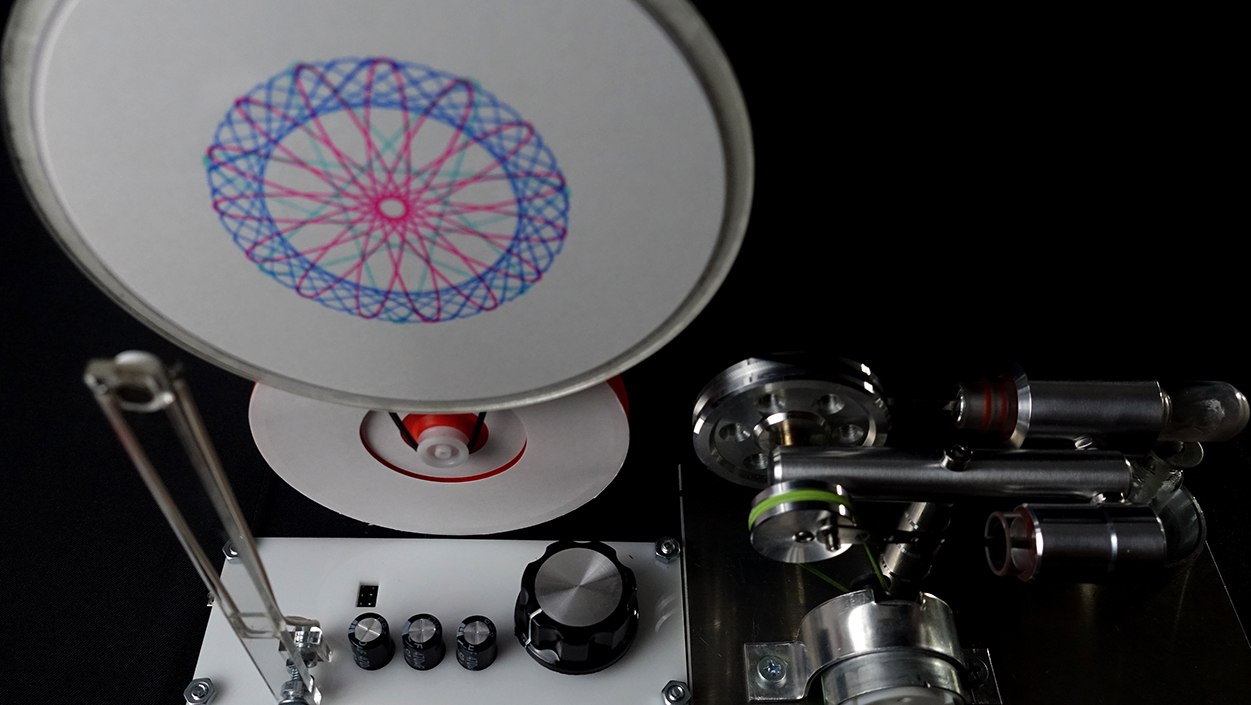 Created by Witaya Junma. ‘Spirotrope’ is a device developed from the hypothesis that an interactive artwork can be created from unrelated objects in a way such that each object is still visible in its essence, whether in its form or its function. The criteria is that the viewer must experience this by interacting with the artwork directly.