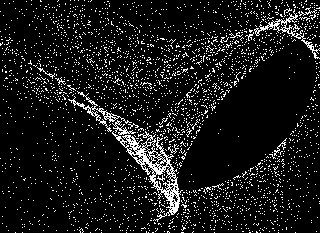 iAttractor is an iPhone application allowing you to generate dynamic three-dimensional Attractor forms you can navigate and alter. An attractor is a term used to describe a set to which a dynamical system evolves after a long enough time. Points that get close enough to the attractor remain close even if slightly disturbed. Geometrically, an attractor can be a point, a curve, a manifold, or even a complicated set with a fractal structure known as a strange attractor. Describing the attractors of chaotic dynamical systems has been one of the achievements of chaos theory.

iAttractor is an application for the iPhone, and if you are into strange attractors, chaos theory, or just interesting 3D forms, this is the app for you. You can zoom in, out, rotate around, adjust parameters. The lite version available here (free) gives you the Pickover attractor to play with, whereas the full version ($0.99) also gives you two versions of the Lorenz attractor and two â€œpolynomialâ€ attractors, bringing the total to five. The full version also lets you change background color and attractor color, view parameter details, and save a snapshot of the attractor to your photo library.