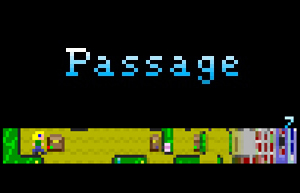 Already available for Mac and PC,Â Passage is more of an art project than what may be assumed at first, a game. This is most probably because it's visual appearance isÂ reminiscentÂ of old school 16 bit pixel based platform games. Once loaded it doesn't take long to realise that the task is pretty simple, maybe too simple; lead your character through the landscape, he meets a woman, they go a little further until they gradually both grow old and die (shockingly).Â Passage is a metaphor for life, in simple terms, describing the journey one may take. There are no bells or whistles, no details about what this may mean, but a pure search to create a form of sentimental value through representation of a life journey. The 'game' is not about providing you hours of fun but instead a 5 min of emotional connection to characters asÂ you lead them through their life's journey into their grave (literally). There is not much that happens in between, besides varied landscape and a number of obstacles you willÂ encounter. What you will realise very quickly is that most of the things in the app do actually have some form of metaphorical relationship to life, like for example obstacles being representative of experiences and difficulties in life.
As you progress thought the landscape, getting old, the world behind you is compressed and the one ahead of you becomes clearer. The scenario is similar when you are at early age when future appears a lot shorter than it actually is, ie compressed. A great analogy for how weÂ contextualise past, by set events and not the time in between. Think of it as a timeline, where past and future are visualised as keyframe whilst the present shows all the frames in between. The aspect ration of the game helps this concept and not just to realise it as a timeline but also to communicate how narrow (shallow) our understanding of our surroundings is.