Cellular automata are one of the classic techniques of deriving algorithmic form, and for good reason – they offer a great return on investment. Spawning complex and unpredictable 2D patterns from simple rules, they are the type of system that many programmers play around with when first investigating computational emergence. While many artists exploring these methods ultimately ‘graduate,’ and move on and mobilize more sophisticated mathematical systems, several recent works by the UK artist collective Troika convincingly demonstrate how a prolonged investigation into a rudimentary approach can yield rich dividends. This savviness is hardly surprising as Troika’s Eva Rucki, Conny Freyer, and Sebastien Noel fuse conceptual, computational, and commercial (gallery) concerns. Their more recent projects include a selection of drawings and projections at Art Rotterdam and a sculpture that offers meta-commentary on viewing ‘in the round’ at Mexico’s ZONA MARCO. This post will hone in on the subset of their recent works deploying cellular automata and evolutionary algorithms; quite notably they forgo the pixels (and screen-based presentation) you might expect and realize rudimentary computation in plastic and aluminum.

It was at a show quite fittingly titled “The Far side of Reason” at OMR Gallery in Mexico City in 2013 that Troika presented Hierophany, a series of 2D compositions rendering cellular automata with neatly arranged rows and columns of black and white dice. In one image, triangular forms expand and then disintegrate; another reads as pure monochrome noise – a chunkier version of TV snow. Initially rendered on canvases in portrait orientation, these chaotic geometries were explored further in landscape aspect ratios within the complimentary series Calculating the Universe (2014, see the feature image that sits above this post).

↑ “The effects of changes in a single site value depend on the behaviour class of the rule: for class 2 rules the effects have finite range; for class 3 rules the effects propagate to neighbouring sites indefinitely at a fixed speed.” – Stephan Wolfram, “Cellular Automata” in Los Alamos Science (1983)

A ‘101’ understanding of cellular automata helps in reading these works. “While many natural systems do tend toward disorder, a large class of systems, biological ones being prime examples, show a reverse trend: they spontaneously generate structure with time, even when starting from disordered or structured initial states,” wrote Stephen Wolfram in his 1983 paper on cellular automata in Los Alamos Science. Put (really) simply, he was interested in underlying forms of proto-computation that might be behind emergent order in snowflakes, the patterns on various shells and animal coats, etc. across nature. Wolfram demonstrates how a single row of cells with random binary information (‘on’ or ‘off’, 1 or 0) could generate emergent patterns when each of the cells in the next line (or “time step” in his words) were influenced by their nearest neighbours in the previous row – essentially, cellular automata ‘trickle down’ from top to bottom. He also explores various permutations mathematically, proposes a typology of outcomes, and discusses several reoccurring forms including stunted trees and triangular clearings, Sierpiński triangles, and others – a rabbit hole most definitely not worth descending into here. In explaining Hierophany, Troika skip the math lesson altogether: “The dice are used to reference our traditional relationship with fate and chance, while the algorithms are an expression of a rapid technological and societal change, that has made them a powerful tool to both simulate and predict our everyday reality.”

In 2016 Troika produced another pair of ‘dice works’ to further expand on these combinatorial aesthetics. A New Kind of Fate (above left) took the monochromatic staccato rhythms of Hierophany and Calculating the Universe and constructed them with tetrahedral (four-sided) dice instead of the more conventional six-sided random number generators. To accommodate the triangular face of the dice and their 45° angled sides, a hexagonal canvas was used. As photographed, the resulting compositions almost look like starbursts floating on the wall, cascading patterns spilling up (and down) from a horizontal centreline. Life and Death of an Algorithm (above right) is a return to both the six-sided die and the orthogonal, but it is also a departure from black and white in favour of colour; the geometry is the same as before but stark contrast has been replaced by polychromatic buzz. A super spartan initial time step has been set up to trigger a field of drizzling triangular forms which yield a large clearing and “eventually culminate in death, as the pattern exhausts all potential paths.” Perhaps this existential map is a literal visualization of the playwright Samuel Foote’s assertion that “death and the dice level all distinctions.” Graphically, the first piece reads like a wall-mounted sand mandala for the math rock set while the latter’s euphoric explosion of colour is dampened by bleak fatalism. 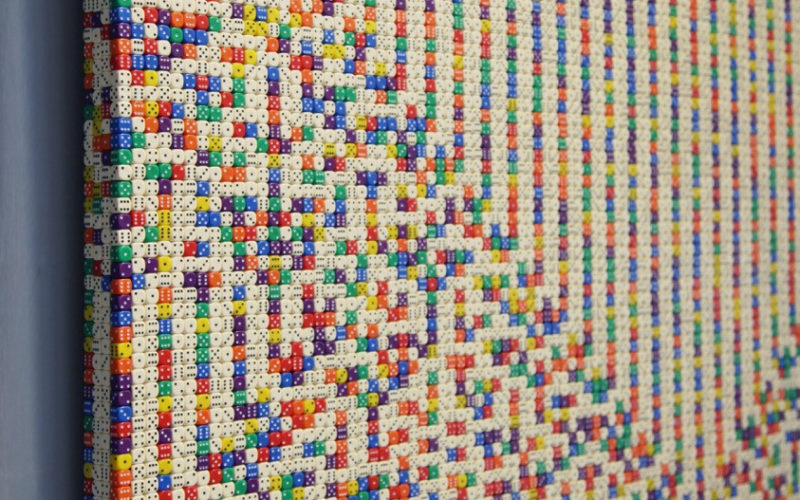 There are a few details in Life and Death of an Algorithm that deserve special attention. The first is the glorious wrap that spills over the edges of the canvas. In ‘turning the corner’ there is the suggestion that the cellular automaton could flow off the canvas and extend in all directions. What is happening under the the image is also suddenly a mystery: is this a surface or a volume? We’ll return to that latter possibility in a moment.

The dice values and colour also warrant attention. Instead of the simple black and white of the earlier works (‘off’ or ‘on’, 0 or 1) we now have colour (red, purple, blue, orange, yellow, green) and white; and of course, values of one to six on each die. In inspecting the colours patterns emerge (green, yellow, green, greeen) when reading from top to bottom, and the same applies to dice values – reading in every direction. In aggregate this information adds a fine grain to the overall composition – and sort of run interference against its legibility. Do the numbers and colours influence one another? Presumably, but how? Go figure, the dice-based work about indeterminacy and mortality is quite vexing. 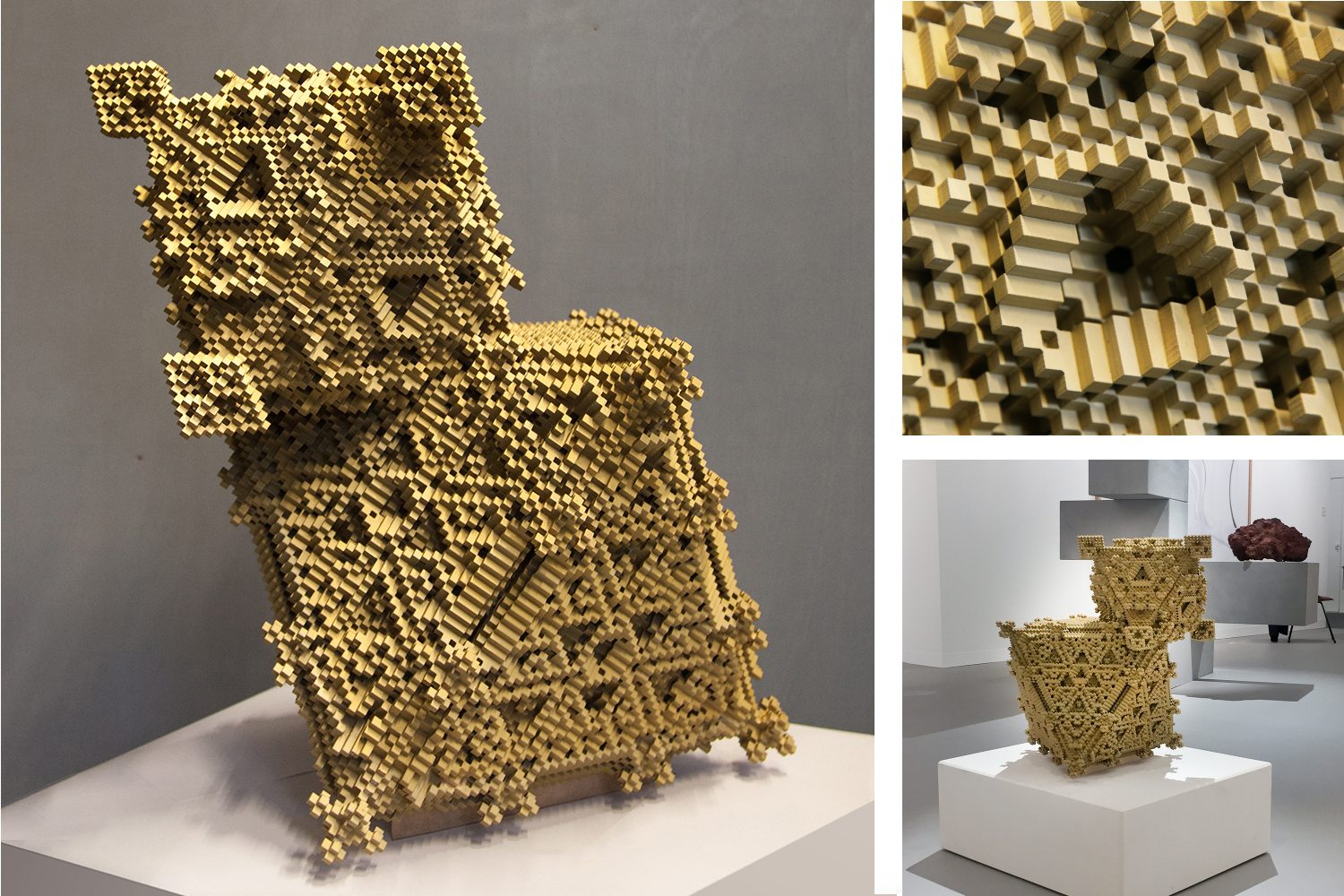 If Life and Death of an Algorithm hint Troika’s experiments with recursive form would inevitably creep into the third dimension, their recent algorithmically-derived sculptural project confirms that suspicion with authority. Ava is an anodised aluminium volume that competently reconciles generative form with the precise tolerances of digital fabrication; in our best estimate it was made in parts with a 3- or 4-axis CNC machine, that were then sequentially affixed to a base, and then ‘built up’ into its final form. Viewed from a specific angle, its triangular recesses read like the characteristic clearings of the dice works, but the pockmarked and pocketed form is far more unruly and unresolved. In their statement about the work Troika describe the piece as being named after and inspired by Ava, the elusive Femme(bot) fatale in Alex Garland’s 2015 film Ex Machina. However, instead of that instance of Frankenstein’s monster perhaps their demented step pyramid escaped from the demoscene? A stillborn fractal – incapable of scaling down to lower levels articulated in the same detail due to the limits of machine precision and structural feasibility – which kind of brings the discussion full circle, back to the artists’ glib thoughts about agency in the era of automation. Or as they frame the question ava poses, “how much or little are we capable of influencing our surrounding reality, how much is predetermined, how much is down to chance?”

Troika
To learn more about cellular automata see Daniel Shiffman’s article “Form Follows Function” in HOLO 2 and/or his in-depth examination of the topic in The Nature of Code. 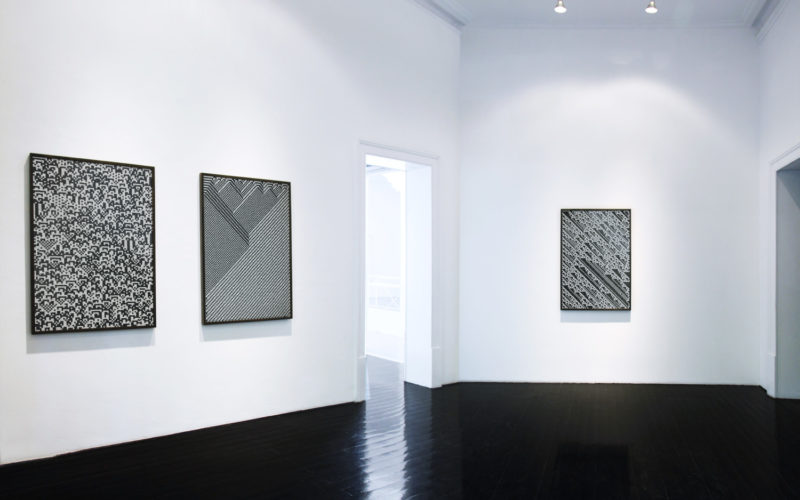 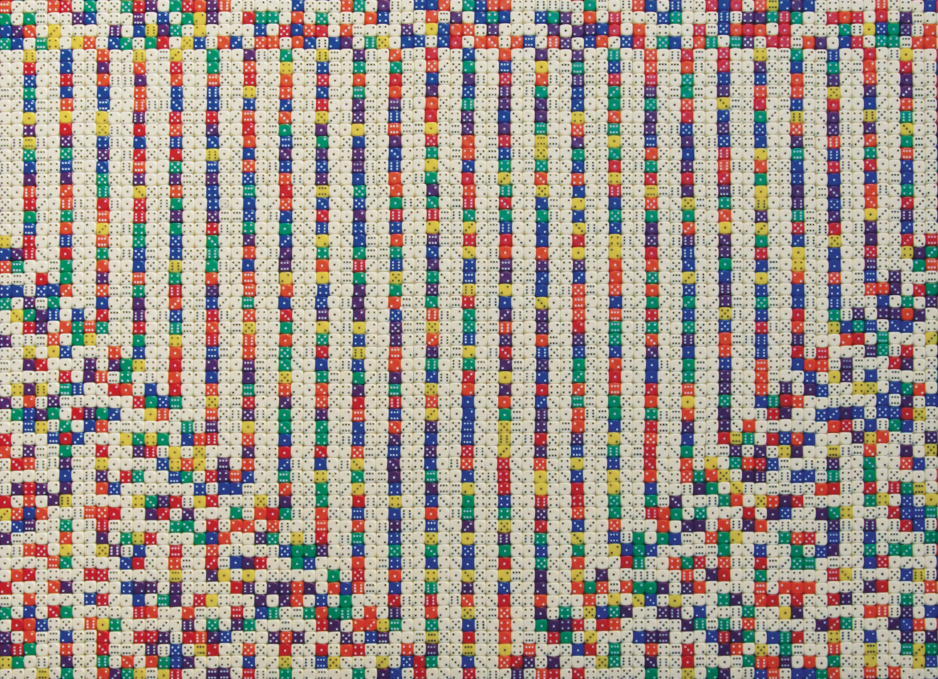 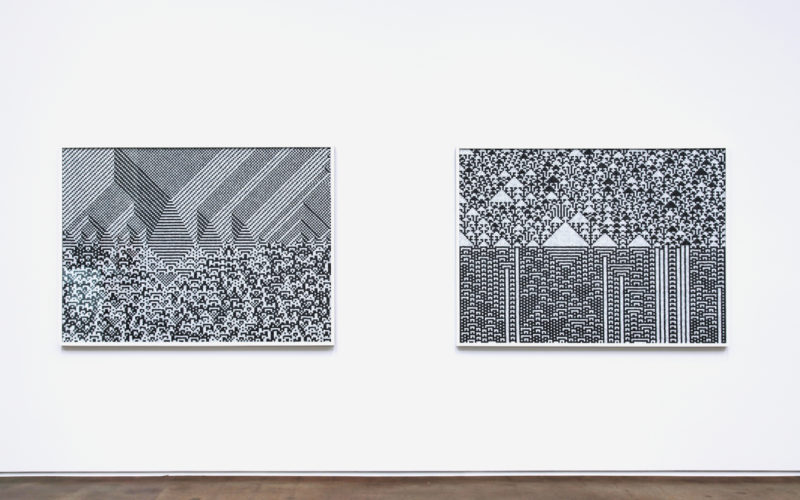 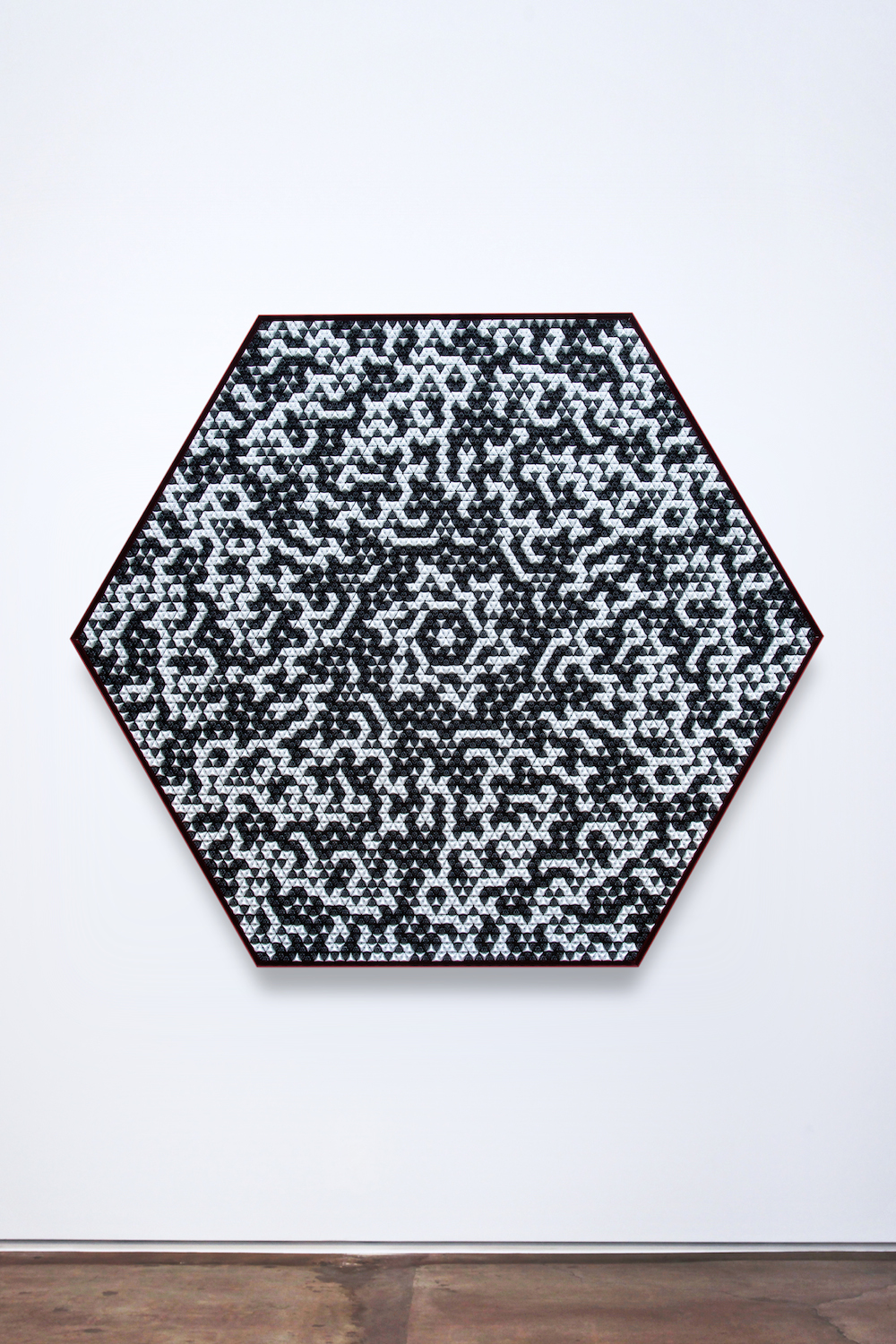