Created by Berlin based onformative, true/false is a kinetic sculpture comprised of arrays of circular black metal segments set in mechanical columns. Interlocking and rotating around fluorescent light tubes, the cylinders cover or expose the light to display an endless number of patterns. The transformation of the sculpture is based on the shifting elements and their correlation to each other. As the segments do not move independently, for any of the cylinders on a column to change, the segments affected must work in unison to achieve the command.

“true/false is a machine that constantly generates instructions to reveal images and assigned patterns according to its algorithm. It visualizes the computational process and exposes the implementation of these commands. As the piece transforms into the assigned motif, it completes the procedure and continues on to the next task. It is a veritable machine at work as it executes instructions and makes the algorithm and transformation between the images visible. Akin to the mythology of Sisyphus, this labour is perpetual and never-ending.”

The installation draws inspiration from devices originally used for calculations, such as Turing machines (info), producing a captivating audio-visual rhythm as variations in the choreography result in distinctive pattern changes.

true/false consists of an aluminium frame housing 24 columns. Each of them containing the mechanics which enable the kinetic motion of the machine. Its primary visual element is a custom cnc-milled and anodised aluminium cylinder. 25 of these are dispersed along each tube, rotating freely around the column. They latch onto their upper neighbor when rotated more than 180 degrees, by doing so clockwise, the cylinders stack in opposite directions. Rotating them counter clockwise will align them in a singular direction.

An algorithmic process calculates the permutations needed to get every cylinder to direct in the desired forward or backward direction, obstructing or revealing the light radiating out of its inner core. 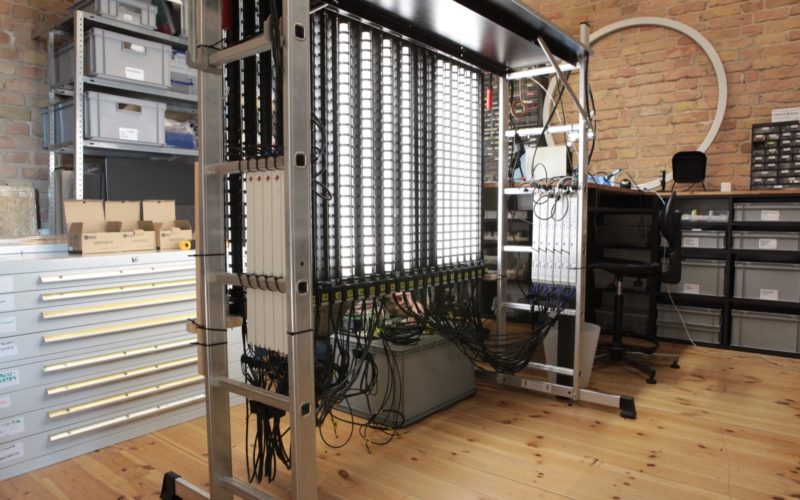 The kinetic motion is driven by a series of 24 stepper drivers, each stationed at the base of their respective column. They are calibrated by means of a hall-effect sensor, after which their torque gets translated through a belt that is in contact with a gear surrounding the bottom cylinder.

The electronics needed to facilitate this arrangement of light and motion are situated in an aluminium housing below the frame. When opened, one can find an array of high precision stepper drivers, optimised for providing torque, speed and reduced vibration, a series of fluorescent light ballasts, five custom PCB’s, four of them acting as a breakout circuit for the Teensy 3.1, an ARM based microcontroller that acts in unison to provide the signals for the stepper drivers. These microcontrollers and their firmware function as a self-contained system, encasing the full algorithm and other control logics. The fifth PCB is a custom HAT board for a Raspberry Pi. This unit hosts the actual sequence of patterns and instructs the Teensys’s what to display. Furthermore, its hardware add-on hosts its own microcontroller that manages power supply to the various electronic systems.

true/false is the result of a long series of iterations and prototypes. For a long time it has existed in various simulations and was appreciated for its visual and auditive properties, swaying in a flux from being purely functional and aesthetically driven. After making a series of functional 3D printed prototypes, the team decided to realize its potential as a kinetic installation.

The design and development of the physical build (ie. the frame, case, mechanics, cnc-milled parts, anything non electronic or software related) has been designed and developed in collaboration with Jan Bernstein. By CNC milling the individual parts the installation entered a new phase of aluminium and acrylic giving it mechanical precision that will allow the installation to operate well over a longer period of time. A big challenge has been scaling up the number of columns and the added complexity and hardware required, providing the need for custom circuit boards and more efficient communication throughout the installation’s various systems.

true/false is currently on exhibit until October 21st, 2017 at the FvF Friends Space in Berlin,
Glogauer Str. 2, courtyard, 1st floor, 10999 Berlin. The exhibition is open from 12pm-6pm or by appointment. 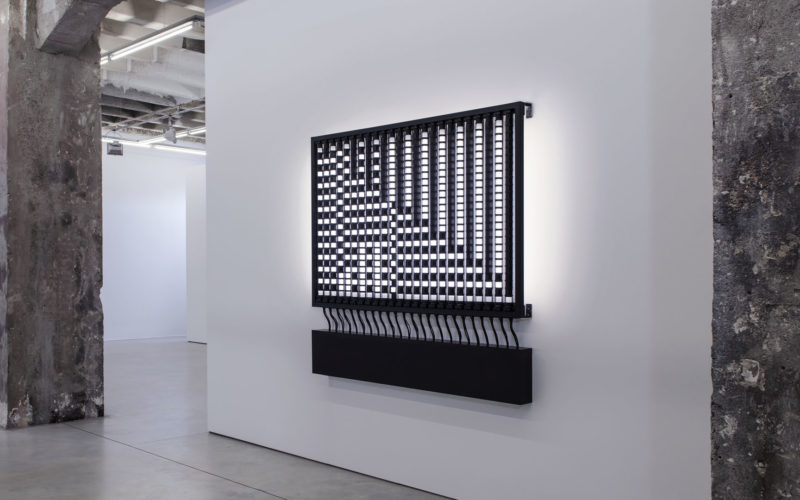