House of Shadow Silence is a new VR work created by Portland-based software artist Jeremy Rotsztain. Riffing on the conventions of the architectural flythrough the project is an elaborate hommage to Frederick Kiesler’s 1929 movie theater the Film Guild Cinema. The Film Guild Cinema’s restrained design ignored the flourishes opulent American movie houses from the ‘roaring twenties’ were known for – Kiesler’s interior was about controlled sight lines and ingenious apparatuses (notably a screen that expanded or contracted under a cat-eye like shutter) that foregrounded viewing. It went further than that though, he speculated the cinematic potential of architecture; he envisioned 360-degree surround projections, anticipating immersive media (and even projection mapping) by more than half a century. Most of the Austrian architect’s wild ideas were never realized due to budget cutbacks – this is where Rotsztain steps in.

“I first discovered Kiesler’s Film Guild Cinema when I came across this iconic picture of the movie house in Anne Friedberg’s amazing book on the history of screens The Virtual Window,” Rotsztain writes over email, pinpointing the inspiration for House of Shadow Silence. “At first, there was as aesthetic connection – love at first sight? – but after reading Kiesler’s goal for the project (“the spectator must be able to lose themselves in an imaginary endless space”) and discovering his life-long passion for endless experiences, I felt like our ideals were aligned.” 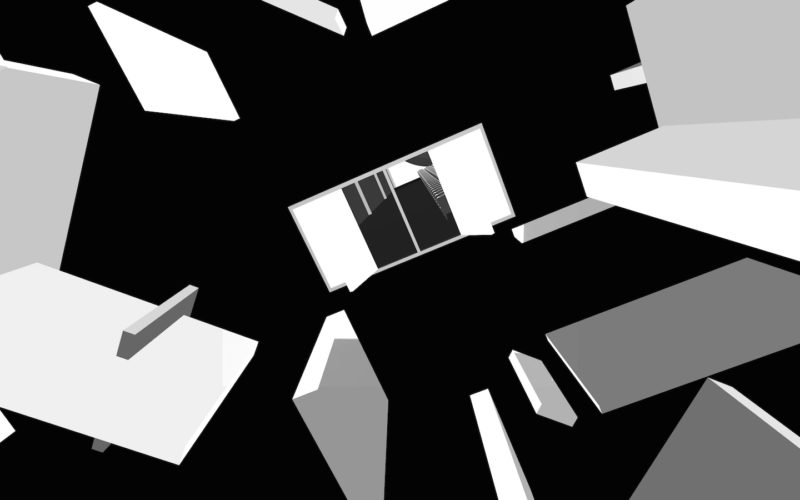 ↑ Exploded view: House of Shadow Silence recreates Kiesler’s unrealized vision of the Film Guild Cinema and then thoroughly deconstructs it

The experience begins with the viewer seated in the middle of the Film Guild Cinema. Didactic intertitles explaining the theatre’s history appear onscreen and – it is VR isn’t it? – the viewer floats into the air above their seat. The space is suddenly filled with pulsating geometric forms, both onscreen and on the side walls; true to the periods’ ascendant Modernist aesthetic, the projections are quasi-cubist and riff on Hans Richter’s experimental animations from era. “The openFrameworks app features two-recurring visual treatments programmed in OpenGL, says Rotsztain of his CG projection pipeline. “The first is a method of texturing called projective texturing, which textures a geometry without using 2D/XY coordinates … instead, it simulates a projector casting an image on the geometry. The way that the projected image falls on the geometry depends on the position, direction, field of view, size and aspect ratio of the virtual projector. The second ‘projects’ the geometry found in Richter’s films Rhythmus 21 and Rhythmus 23 into 3D space, creating dynamic geometry that appears to extrude from the cinema’s walls.”

While Rotsztain served as film programmer in his virtual cinema he was a metaphysical tour guide, first and foremost. After floating up into the air at the beginning of the experience the viewer is drawn into the screen, as they breach that threshold they enter an abstract realm of light and geometry. After clearing this zone and its long rays of light (which ever-so-slightly evoke Douglas Trumbull’s slit-scan sequence from 2001: A Space Odyssey), the viewer passes through the theatre repeatedly, the laws of physics bending a little more with each fly-through.

House of Shadow Silence launched in August and for its premiere Rotsztain rented the Academy Theater in Portland (a vintage theatre in its own right). “Visitors entered in groups of six and took a trip back to the Film Guild together. One viewer called it ‘an out of theater experience,’ which was pretty spot-on.”

The openFrameworks-based app powering the Oculus Rift experience makes use of the OculusRiftCV1 that Rotsztain released as part of his duties at Second Story last year, and Elliot Woods’ ofxRay for gaze tracking of the geometric forms. Its Max/MSP sound engine makes extensive use of Oculus Rift’s spatialization VST plug-in to position the various sounds in space. “It was super simple to give each sound a location relative to the path that the viewer takes through the experience. We also used Nathan Wolek’s LowkeyNW package to perform granular synthesis on the samples during viewer interactions with the geometry,” says Rotsztain. For the (spot-on!) score, collaborator Chris Carlson (of Borderlands fame) sampled and remixed 1920s silent film compositions using Ableton and Max for Live. “Our custom Max patch became a responsive score, triggering and mixing these sounds in real time based on scene changes and user events. We used OSC to send data between the applications–typically in sync with events that were taking place in the animation.”

With House of Shadow Silence Rotsztain has done something commendable. Beyond making a smart and exciting VR experience (projects with both those qualities are unfortunately quite rare) he’s used an emerging medium to say something new about an old one; the project is a weird re-figuring of what viewing cinema is or could be – and whatever that was, it no longer is when it’s reconstituted in VR. Between the anti-gravity aesthetics, resurrected ‘zombie’ architecture, and disembodied fly-through, the work is singular. Would it be flip to say ‘hold on to your seat’ to describe it? Because if taking flight and floating into a post-spatial void is not the right moment to trot out that trite phrase, one will never arrive. 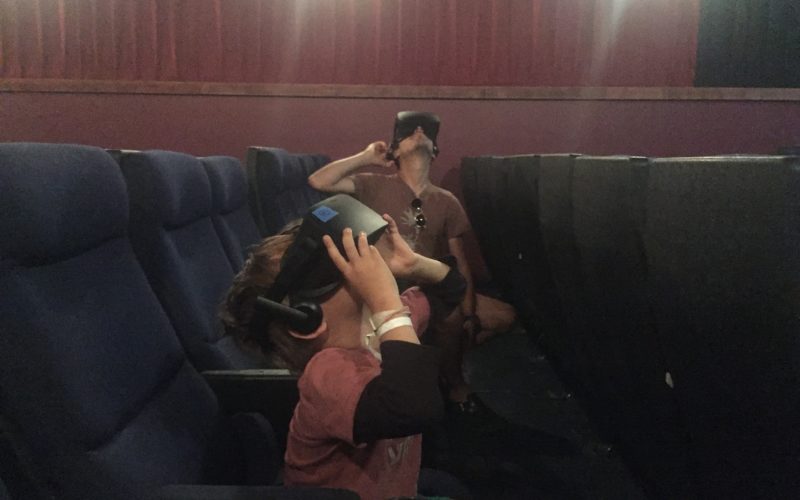