The AADRL is a post-professional MArch (Architecture & Urbanism) graduate design programme at the Architectural Association School of Architecture, in London. Led by Theodore Spyropoulos, it has four research labs that respond to an umbrella agenda that the team set for a period of 3-4 years. Most recently they have been working on a theme of ‘Behavioral Complexity‘, which explores design that is proto-typical, scenario driven and examines behaviours through design enquiry. A feature of this research agenda between the four labs is examining robotics within architecture. They have two studios that are exploring 3D printing at the scale of buildings, one augmenting robotic arms by developing custom end effectors and the other exploring drones and swarm printing and finally the fourth studio is looking at parametric approaches towards kinetic architecture.

The following is the work from AADRL Spyropoulos Design Lab, which has been exploring behavior based design systems that are self-aware, mobile, and self-structure and assemble. The research explores high population mobility agents that evolve design that moves beyond finite conceptions of space towards one that co-evolves and adapts. The research looks at developing strategies of intelligent design units that through organisation develop body plans that afford new behaviours to emerge. An example of this is OWO project below which as a singular unit is conceptualised as a unit that through embedded pneumatics allows the unit to expand / contract, curl, and roll. With respect to mobility as an individual unit it can roll in its mobility mode, but for example a unit connects to two other units then the body plan allows for a tripod configuration, which allows the creature to walk.

The primary modes of that we develop our digital and analogue research are mobility and self-structuring. This thesis takes the position that every unit in its simple form (singular) should have the capacity to be mobile and search for other units. Our Self-structuring mode is higher level organsiations that are collective in principal and allow units to construct spatial structures. Driving this is evolutionary algorithmic strategies that take into account the physical constraints of the designed unit. The projects do not have a blueprint that they follow and they do not have secondary scaffolding systems to assist. The interactions are designed through playpen behaviours that are learned through iteration. We use evaluation criteria like load paths to allow for reconfigurations after a stable form is achieved and in general it is formative strategy.

The physical prototypes are use various actuation strategies, some use small scale hydraulic pistons, other soft robot strategies through custom silcone casting, servoes and electromagnets. The software platforms include Processing / openFrameworks, Maya, Miarmy, along with Arduino micro controlling, camera tracking etc. They generally use voxel based computational strategies for most of the digital generation and communication.

The research references for this work looks to research of Hod Lipson, Karl Sims, and John Henry Holland’s research with adaptive systems. All the projects develop a computational back end that examines evolutionary algorithmic design principles that the lab explores.

Synergia proposes a new model of behavioural assembly systems as a generating force for architectural form based on the recently revolutionised field of robotic research, which studies the soft multi- material, freeform fabrication technologies as a new development for locomotion. They work within this new paradigm creating a close relationship between architecture and machines. Their proposal has the capacity to fabricate optimised tools that could serve as a technological system that acts as an emerging model for innovative modern spaces. The reproduction of multi-programmable matter into the frame of generative soft systems enable them to speculate on a flexible evolutionary design algorithm for 3D multi-material structures. Through the encoding of a compositional pattern producing network (CPPN), they can control complex material deformations in order to achieve new forms of spatial assemblies. Utilising digital simulation studies of a grid information system they constructed a controlled system based around a universal unit formed by a voxel organism with the capacity to direct graduated strategies of actuation in an expanded, contracted, rigid or neutral combination of states. This allows for the possibility of envisioning a dynamic system that can respond to changes through self- awareness, mobility and softness where every unit could reconfigure in order to transform into a determined structure. 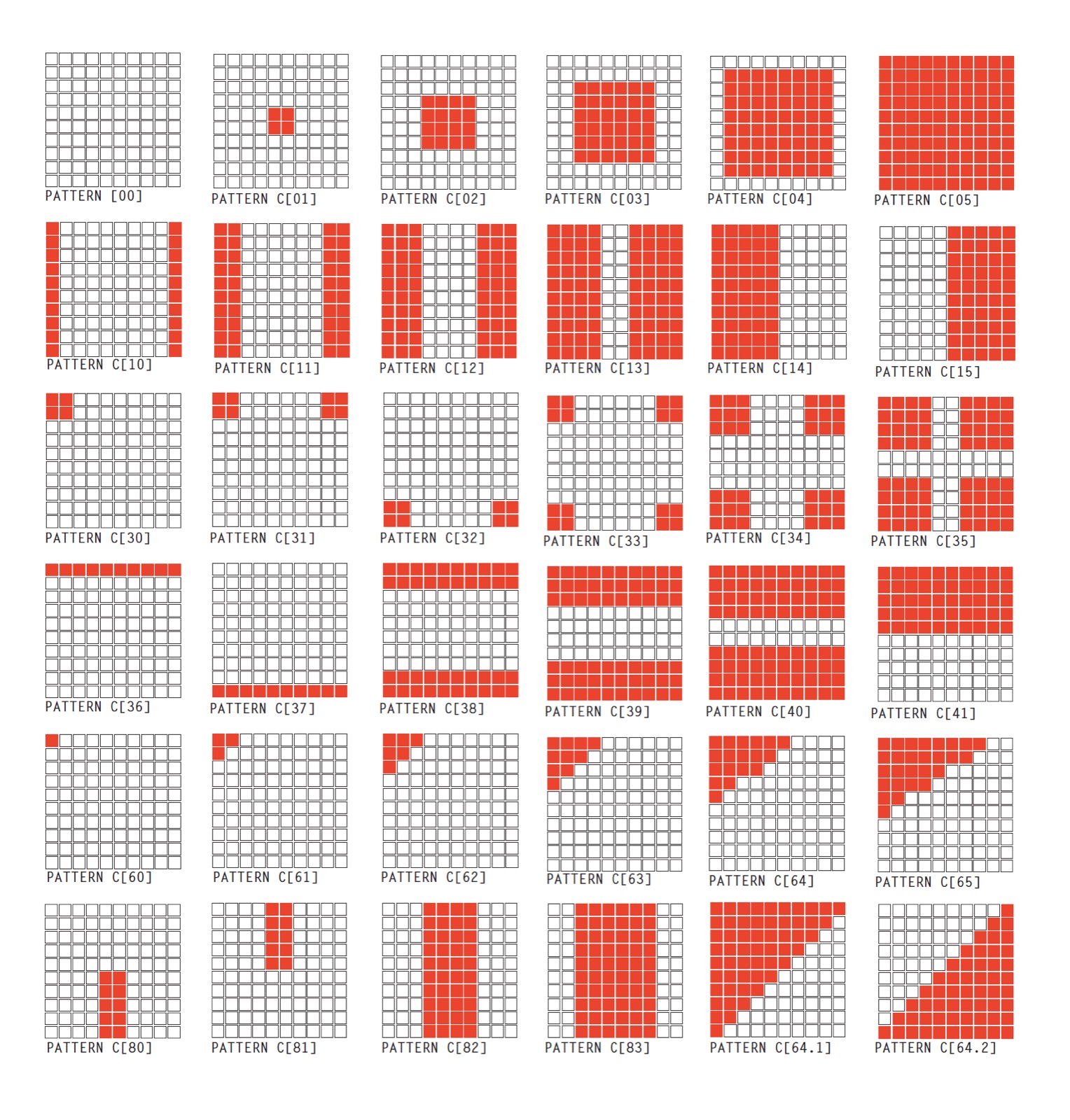 Our project research exploits the potential to speculate on a system which is adaptive and has the ability to generate itself through communication within a certain environment. This system was explored through a series of units that possess a chain of interlocked interactions where they act to a set of rules that cause a distribution in space. We propose a new architectural typology that offers an intelligent actuating unit that has the potential to form or deform evolutionary infrastructure. This new type can act as a new design tool for application within the physical world to form space and architecture. 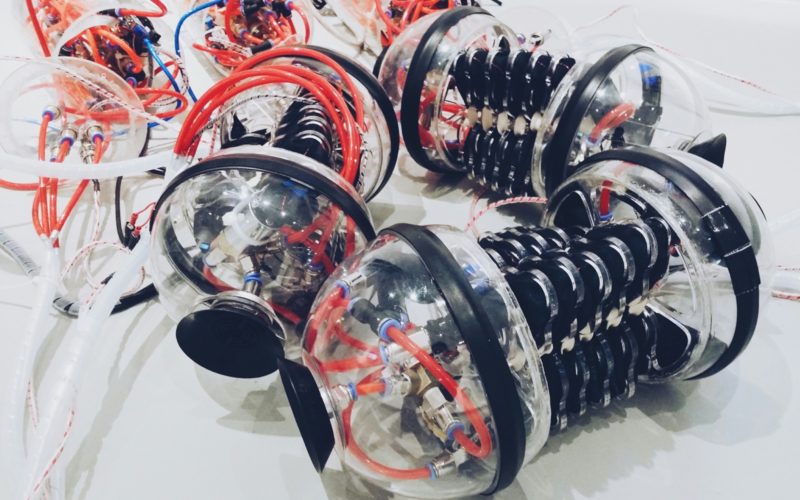 OwO is proposing a new model for the urban environment; a behavioural system based on simple rules and the complex relations and interactions between them in order to achieve a model of self-assembly, self- structuring, adaptation and reconfiguration in time. The proposal blurs the distinction between the artificial and the natural and opens up the possibilities of emergent space organisations that are based on singular and group behaviours. Digital simulations and physical prototyping tests are focused on communication strategies. The time-based system is initially set up with a basic unit that has the capacity to merge into different body plans through an open ended combinatorial procedure, with novel locomotion and self-structuring characteristics. The unit emphasises its internal mechanics, joint system, muscle activation, its autonomy and the unification of the whole system. On the global scale the organisations lead to a range of different spatial aggregations that are continuously reconfigurable. 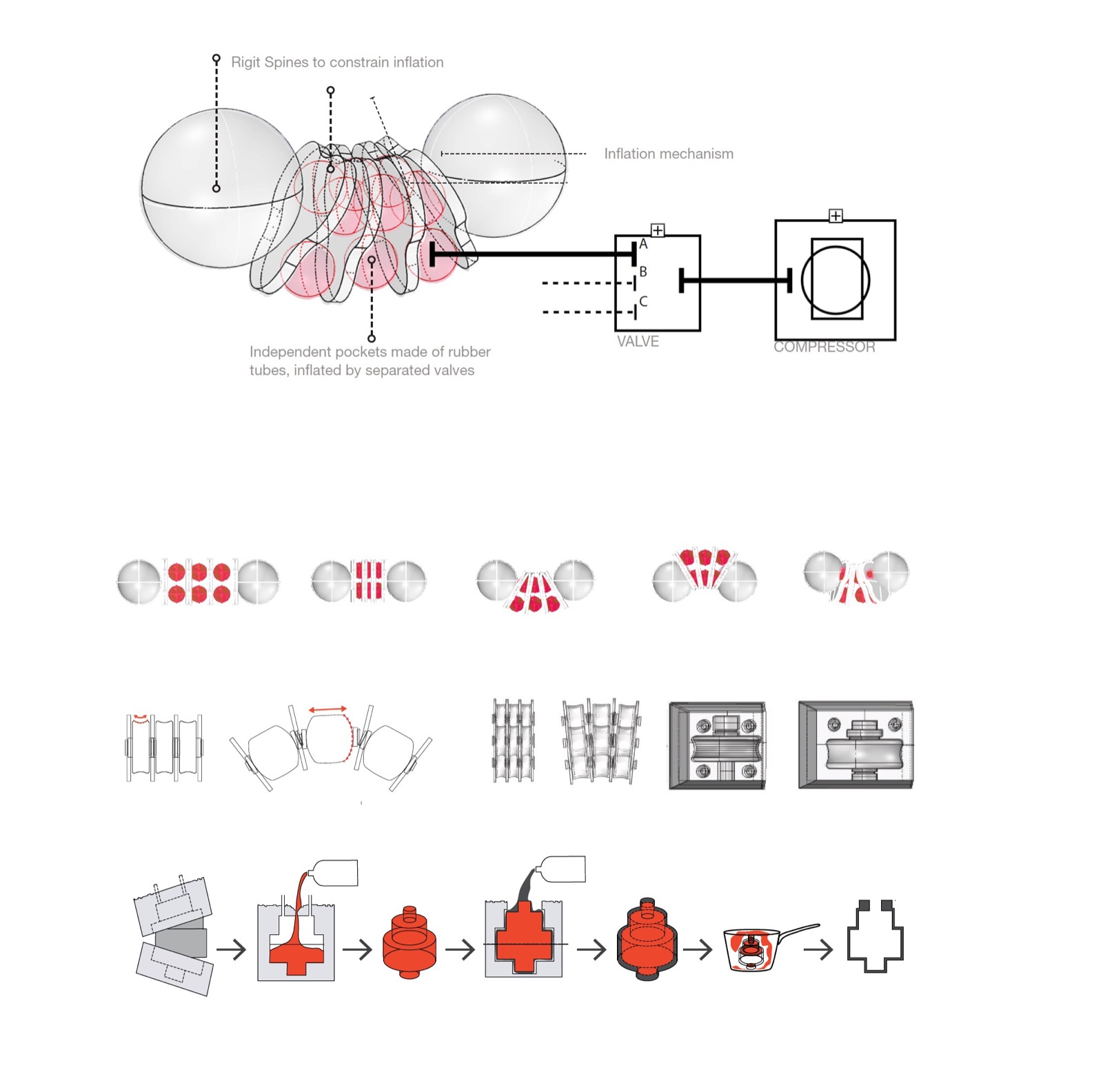 London’s rich public space network is the prototypical site of our project. The site enables us to take into consideration the evolution of spatial aggregations, the information-rich environment and the computational framework that characterise the contemporary city. The project integrates itself into a model for public space as a flexible and self-organised system that operates on different scales and conditions. It proposes a shift from a fixed and permanent public environment, towards an adaptable and participatory model for public space. 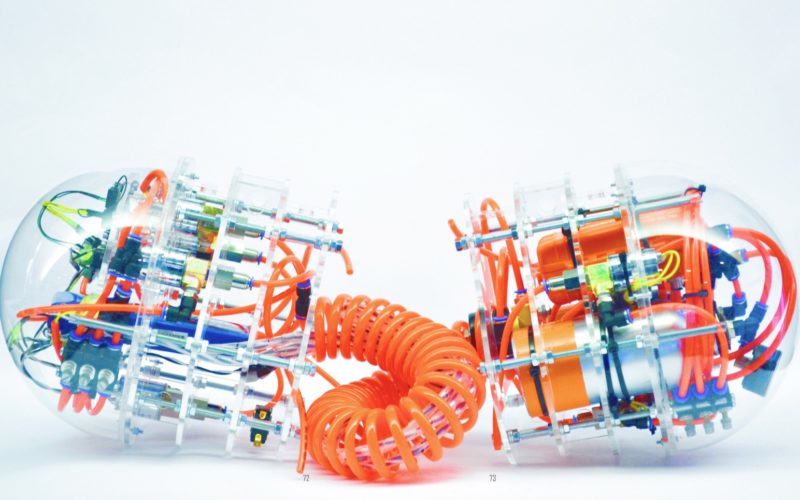 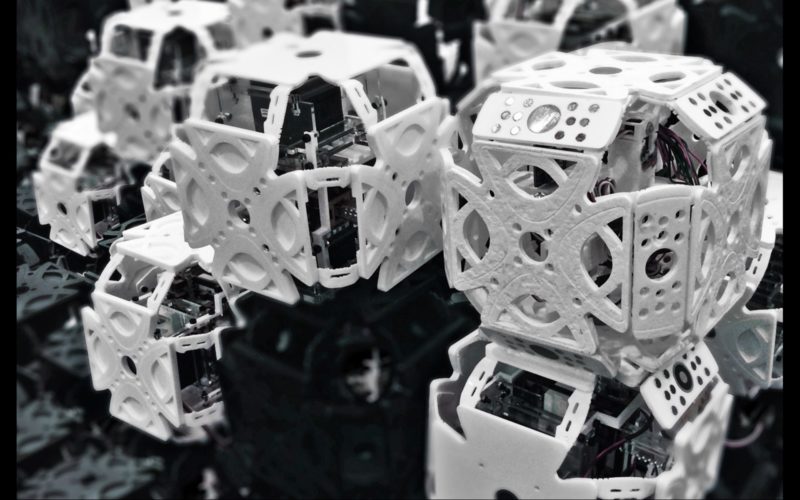 HyperCell is an architectural system that is dynamic and can respond to changes through self-awareness, mobility, softness and re-configurability. The proposal responds to changes through the self-awareness of each cell to its surroundings and the localised cell population. Every individual cell can make its own decisions and has the ability to climb, roll and change its shape. HyperCell is based on local decision making between each cell and creates spatial structures, changing continuously according to its population. Their system exhibits methods of self-assembly where a number of cells are able to come together without predefined instructions and create structures. Computational and physical strategies of self-assembly were developed that demonstrate the ability of the single cell as well as the collective organisation. The mobility of the system works at two scales, local and global, allowing the structure to be constantly reconfigurable. Through local decision making the system can create space with information derived from the local and global data. 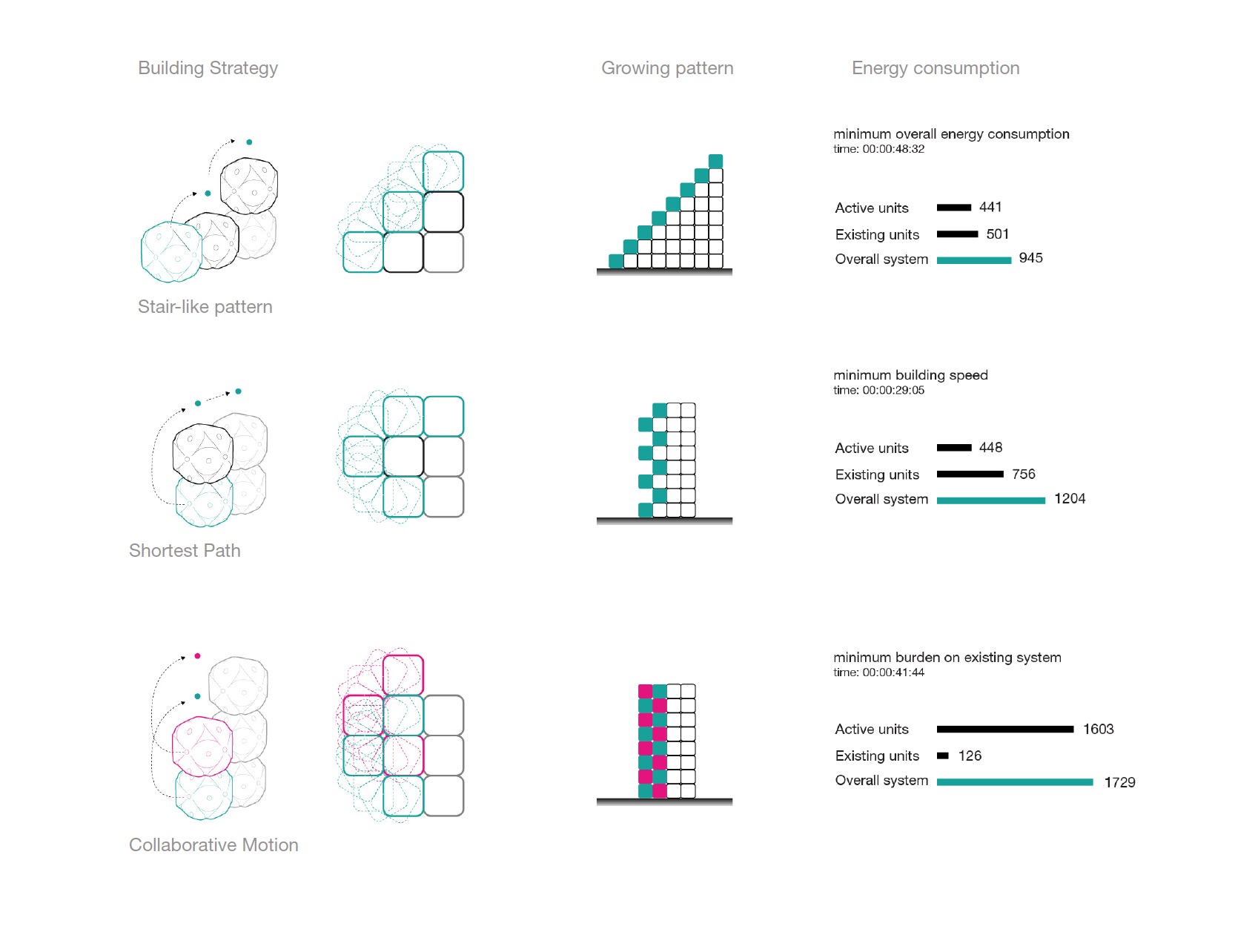 Architectural intervention in cities like London takes time to implement. We propose a new architecture typology that will address the need for a rapid deployment structure within the city. The project analyses data stored by the city, live data collected from different sources as well as local data harvested within the system, utilising this information to facilitate decisions on where the cells travel to and what spaces are required to be generated. If the system is idle it will enter a ‘playmode’ where cells are able to interact with each other. 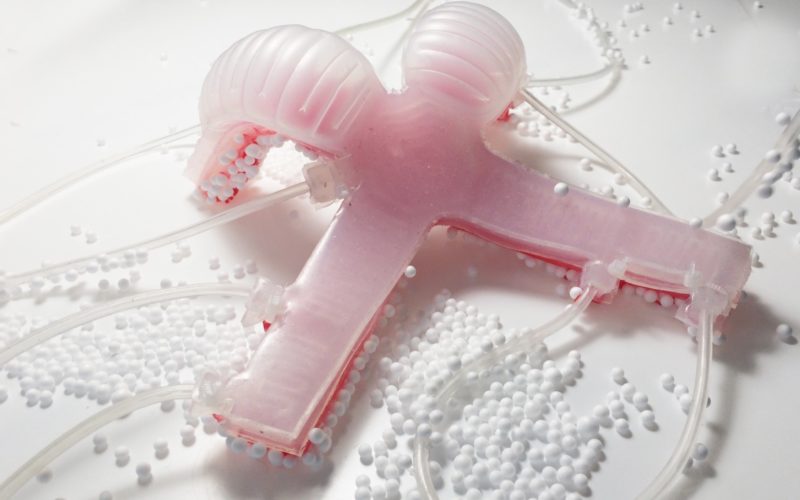 XO is a research project that is positioned as a way to investigate softness in architecture not only in a programmatic sense, but also working through the problem of softness materially. The team therefore proposes a self-regulated system that exploits the gradients of pliability and softness as a technique to deal with problems of mobility, formation, structuring and organisation within a system. To achieve these goals, they employ communication strategies that negotiate between taxonomies within an ecology which control the outcome of the ecology’s self- regulated properties. Working up from the lowest level of organisation and intelligence, their system starts by defining two taxonomies that interact within the system. These separate taxonomies use division of labour specified by their characteristics in a collaborative model to achieve complex goals. They refer to these two taxonomies as spheres and grippers. The sphere is a passive unit whose motivation is to regulate the system. The gripper’s primary goal is to organise and interface the system. The simple goals of these taxonomies cause seemingly anonymous behaviour when deployed at a small population, but once deployed in the thousands, discernible emergent formational qualities begin to manifest themselves within the ecology. Over time the system slowly, yet continuously, self-regulates and reconfigures. 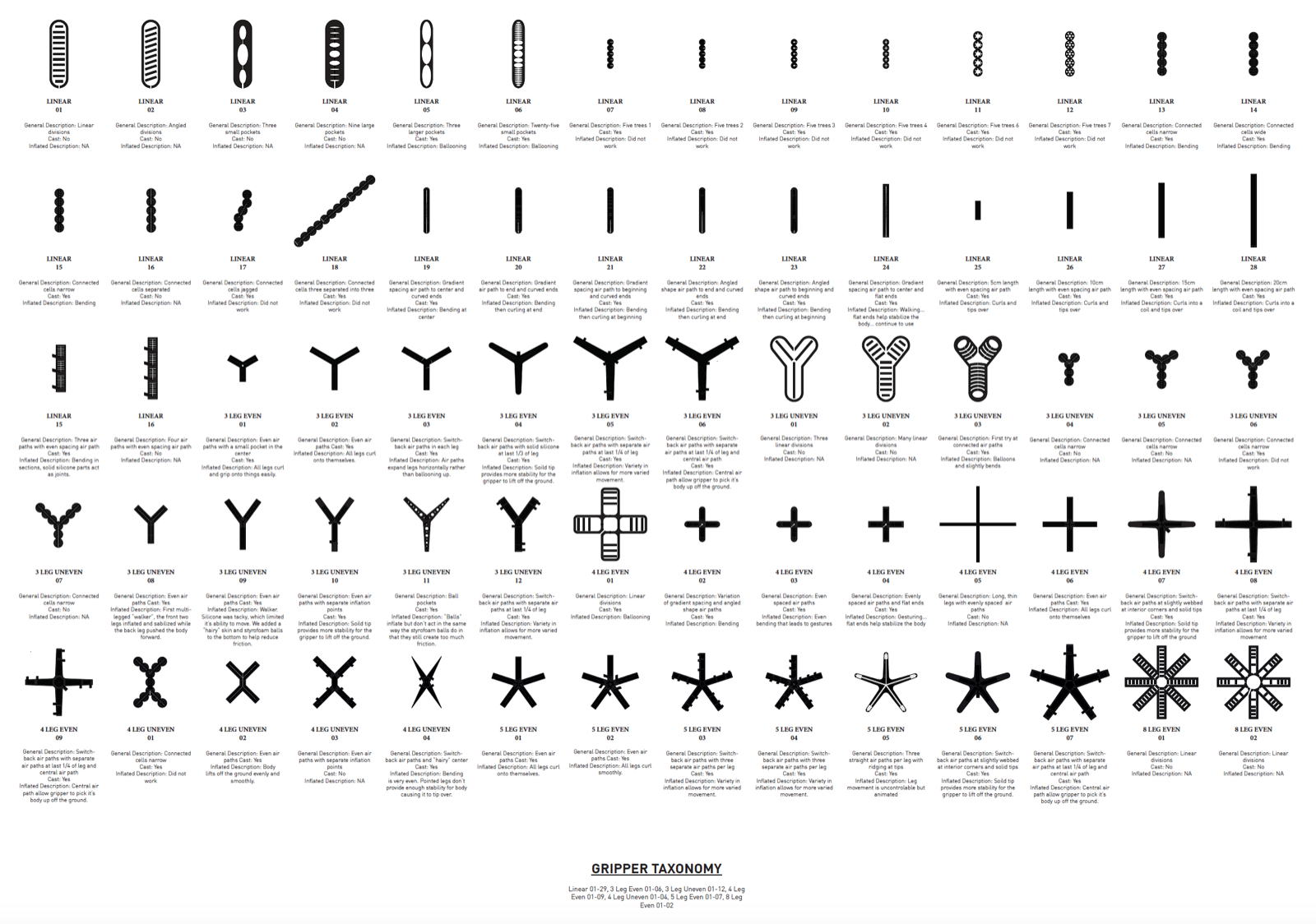 Within this we aim to challenge the idea of modularity by establishing various relationships at every level of organisation. That is to say that the increments of the system, at any given time, can be seen as a singular element or the co-dependencies of elements comprising the system. Within our ecology the difference between the one and the many becomes blurred. 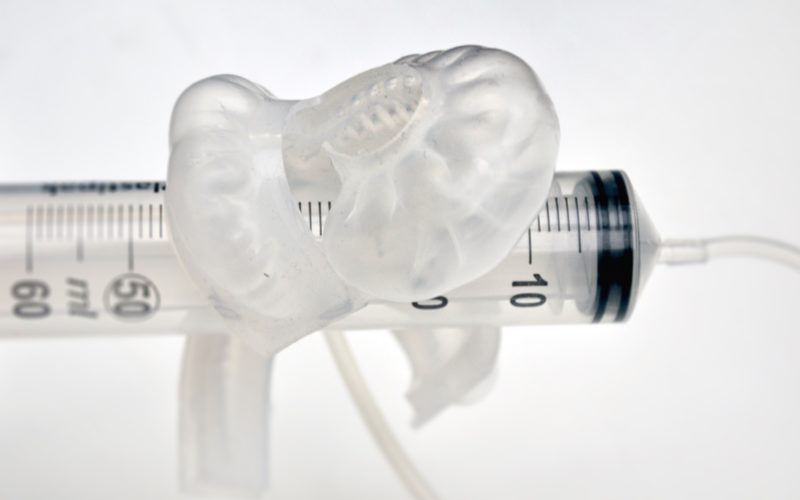 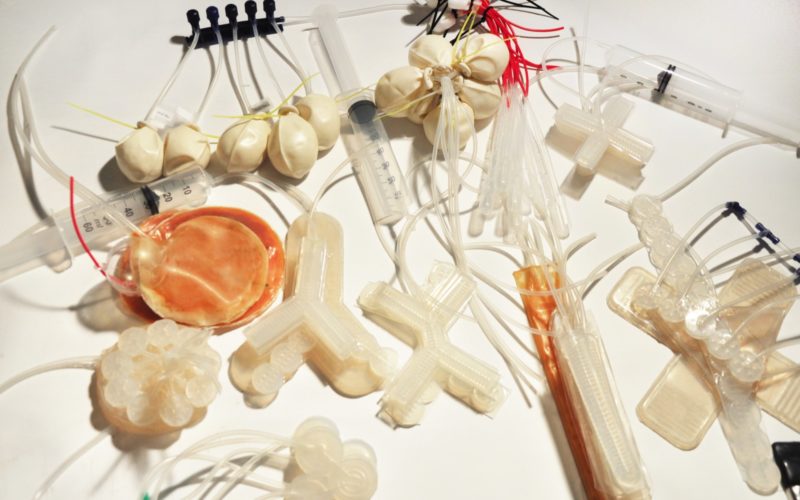 Delta is a research project investigating strategies of adaptability that invokes the foundations of ‘mobility’ and ‘self-structure’. Adaptability is based on a multi-scaled principle of creating different levels of communication and organisation. The unit scale consists of the capacity to transform a single entity that provides mobility and self-reconfiguration. At the aggregation scale provides different modes of communication between units. And at the scale of large populations, the system addresses space making strategies and framework transformations in order to create dynamic ecologies. 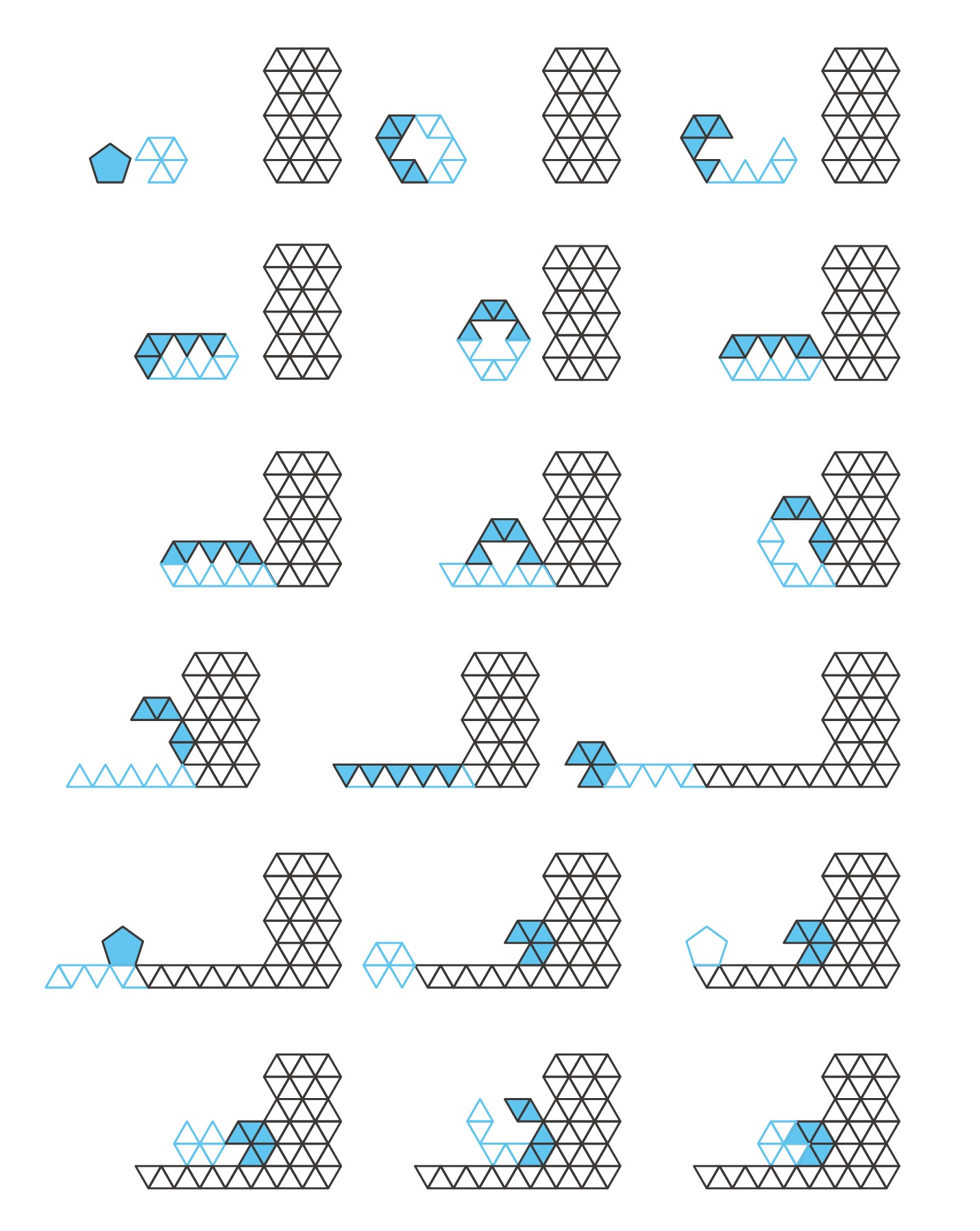 The research initially began by evaluating patterns in a tetrahedron to initiate mobility and self-structure. Further iterations on the evaluation of mobility criteria resulted in a transformable unit capable of different states of motion and self-assembly. The project manifests as a dynamic system shifting its role from an individual component to a collective mass capable of adapting by means of reconfiguring the framework made by all the unit’s total transformation and structural organisation. Simultaneously, the communication between units enables a distributed flow of information within the space providing interaction between environment and user.