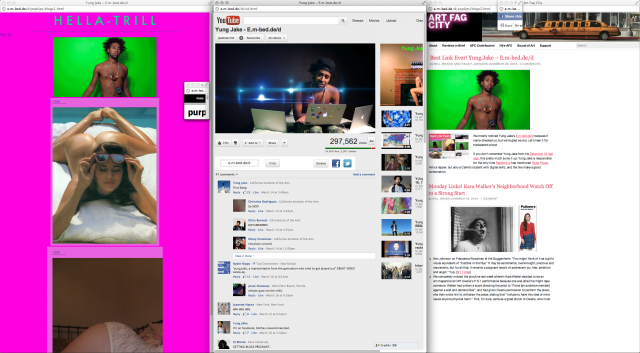 In his mile-a-minute guest spot on Rob Sonic's most recent album Sabotage Gigante, Los Angeles-based Busdriver fires off a verbal salvo about powder burns on a disk drive and generating buzz across the blogosphere. While this kind of technobabble isn't exactly the purview of most non-nerdcore MCs, broader discussions about the propagation of fame and channels of distribution have always been front and centre in hip hop. Yung Jake is an MC, CalArts student and a web developer with some serious chops who recently launched e.m-bed.de/d, a meditation on "the time after a song is released", charting a track's humble origins from a bedroom studio upload to YouTube through to 'winning the internet' as it virally spreads across blogs and social web services. Articulated in a visual language similar to Chris Milk's many-windowed browser-based video for The Wilderness Downtown, Yung Jake's self-reflexive lyrics and visual design map out a mosaic of influence that chart the hypothetical trajectory of his URL as it is retweeted by Justin Bieber, shared on Facebook and tumblr, blogged on sites like Rhizome and Pitchfork—even seeded on The Pirate Bay—as it racks up hundreds of thousands of views.