Having just completed its twelfth run, Montreal's MUTEK festival continues to cultivate the the substantial niche it has carved out for itself on the global media arts circuit. In addition to a storied history of showcasing emerging and established electronic musicians of all stripes, MUTEK has also acted as an r&d lab for exploring the possibilities of integrated audiovisual performance. In 2005, a programming stream dedicated to presenting bleeding edge collaborations between musicians and visual designers entitled A/Visions was brought into the fold to showcase innovative projects like artificiel's cubing and Marc Leclair & Gabriel Coutu-Dumont's 5mm. A/Visions has matured so rapidly that by 2008 this supplementary programming was consistently eclipsing 'big room' headliners and—at least as many MUTEK regulars were concerned—functioning as the locus of innovation within the yearly gathering. The 2009 and 2010 AV performance programming upped the ante even more and the expectations for both experimentation and production design were very high going into the this year's edition of the proceedings. This post presents an overview of and reflection on material featured at A/Visions two weeks ago in Montreal. 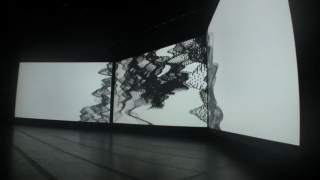 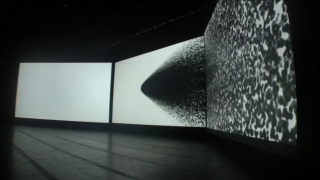