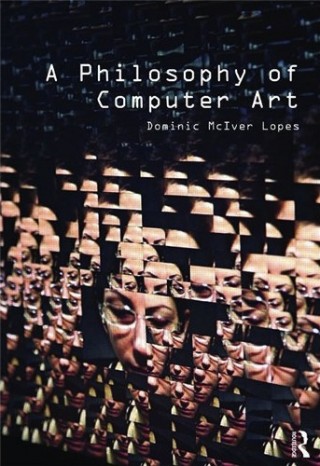 A Philosophy of Computer Art is a text that may interest some readers of creativeapplications.net as it covers the intersection of computing and art, discussing some of the classics of interactive art, and doing a lot of thinking about what art that uses computers actually is. In it Dominic Lopes does several things very well: it divides what he calls “digital art” from “computer art”, and it correlates that second term, which I’ll put in capitals to mark that it’s his term, Computer Art, with interactivity. He also articulates precise arguments for computer art as a new and valid form of art and defends his new term against some of its more tiresome attacks. As a quick example, Paul Virillios concerns about the debilitating effect of “virtual reality” on thought which is more than a little reminiscent of Socratic concerns about the debilitating effect of writing on thought and points to an interesting conclusion: what we call thought is a technologically enhanced phenomena. Note Friedrich Kittler: most human capacities are enhanced in some way or another with no great damage to the notion of “humanity” or “human”. It’s little more than a failure of imagination to thunder about how those augmentations debilitate the natural state of humans. Lopes also makes several extremely astute observations about the nature of interactivity and repeatability, comparing Rodins Thinker, Schuberts “The Erlking”, packs of refrigerator magnet letters, and true interactivity in artwork and concluding that interactive work has distinct characteristics. What he comes to, or what I read him as coming to, is this: a structured and rule based experience is interactive. “A good theory of interaction in art speaks of prescribed user actions. The surface of a painting is altered if it’s knifed, but paintings don’t prescribe that they be vandalized.” Reduced even further: grammar plus entities plus aesthetics equals interactivity. He also makes, to pick just a few, excellent arguments for the interpretive necessity of a view in automated displays, astute observations about the potential value of a computer art criticism, and for the nature of technology as a medium.

But Lopes is also a philosopher and philosophers seek to, among other things, define categories. Painting, sculpture, dance; these categorized mediums have all served us well over the years and so the thinking goes, why not extend them and add another: Computer Art. I’m not so sure that the idea of Computer Art as, with an admittedly blunt reduction, “stuff on a computer that allows you to participate in it presenting itself” is particularly useful. My feeling is that this isn’t what interactive art or art made in collaboration with computers is presently nor is it a meaningful extent of what it should be. The device is not the method, nor is the extent of what makes this type of artwork rich and meaningful and computers aren’t really the medium: algorithm and computation are the medium. In Form+Code, Casey Reas and Chandler McWilliams are right to point to Sol Lewitt as an earlier exponent of explicitly algorithmic art and tie that into the current computational and algorithmic art-makers. A computer originally was one who did computation, that is, a person sitting with a slide rule, pen, and paper and was only later applied to machines. The idea of computation is that it offloads a pre-existing human capacity, accentuates pre-existing things in the world. The person who calls their friend on their cellphone describes their action as “calling my friend” not “using my cellphone”. The person using Ken Goldbergs TeleGarden (a work mentioned frequently in APAC) is marveling at how they can collaboratively participate in creating a garden, not at how they can control a machine via a network. The point is not the device -- the point is interactive computation, extension of human aptitude and capacity, and the type of relationship with the world that it enables. His insistence on the primacy of mediums and forms is doubly odd because in his finale Lopes emphasizes that “computer art takes advantage of computational processing to achieve user interaction”. Close, but not quite there.

4 thoughts on ““A Philosophy of Computer Art” by Dominic Lopes [Books, Review]”