Last September, Ottawa’s Artengine hosted a symposium to explore “making under the influence of digitalism” and contemplate the roll of the craft in contemporary art and design. Organized as a series of discussions, the daylong event posed three major questions to participants: How do we talk about making in the 21st century? What new relationships to materials emerge in the use of digital and mechanical tools? What are the opportunities when the abstract world of computing encounters the material world? On hand to ponder these contentious queries were craft historians (Sandra Alfoldy), curators (Steven Loft, Rachel Gotlieb, Sarah Brin), wearable technology researchers (Valerie Lamontagne, Joanna Berzowska), architects (James Hayes, Tom Bessai), a jewelry designer (Greg Sims), and thinkers from the media/digital art sphere (Garnet Hertz, and myself representing CAN and HOLO).

Artengine was not simply facilitating a timely conversation, as organizers of the wildly successful Maker Faire Ottawa (Canada’s largest event to maintain affiliation with the Make: magazine mothership) they’ve been thinking deeply about the intersection of artist-run centre culture and the maker movement since 2010. And they’ve made a point of experimenting with the expectations there, by strategically planting (more conceptual) art projects and installations around the event as kind of a ‘trail of breadcrumbs’ to attract new enthusiasts and practitioners, and widen their audience. 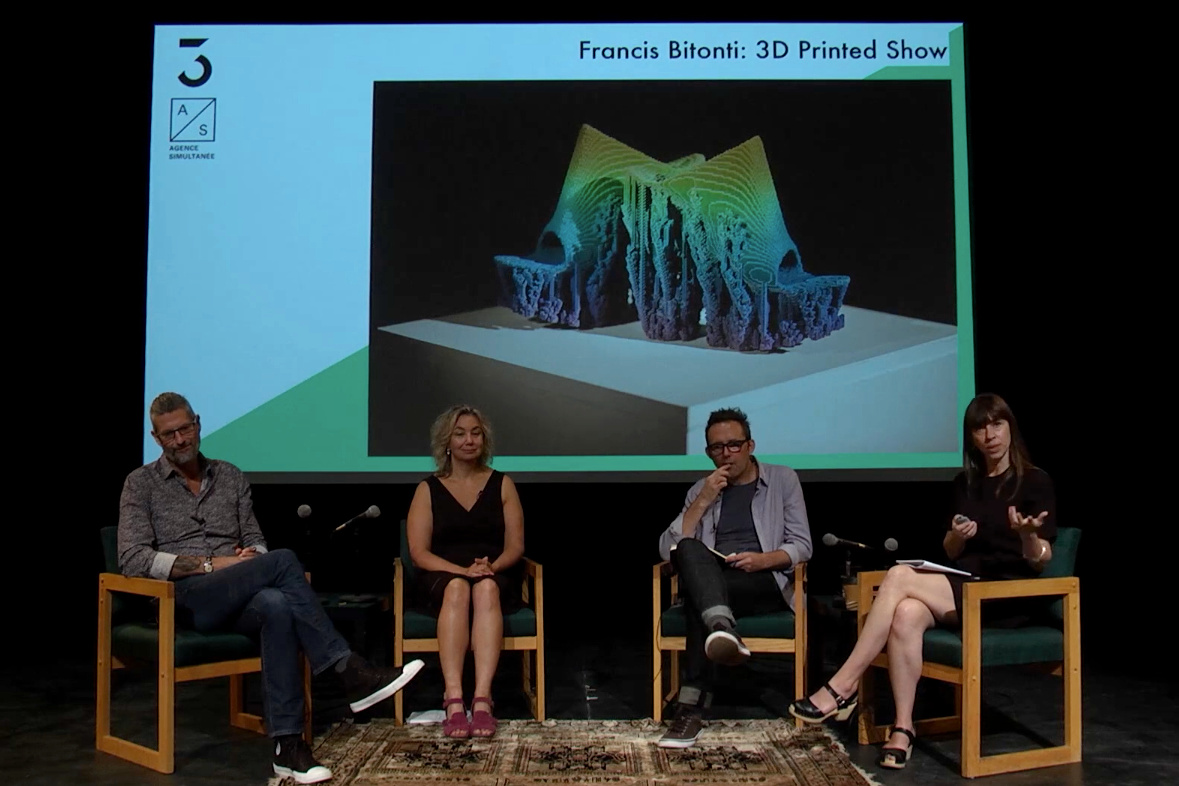 “Within studio practice, technology is often described as facilitating the maker’s vision. So there is this idea that it is very positive, but that the maker has not lost use of their hand. And although the hand is rarely foregrounded, it’s the maker’s originality, the creative vision, the thinking, that gets the spotlight. On the other hand, within corporations and pop culture, technology is unacknowledged and the idea of ‘handcrafted’ and ‘crafted with love’ is what is emphasized – no matter how ironic.” —Sandra Affoldy

“Two weeks after you get this thing, the material reality sets in – how to calibrate it, inconsistencies, limitations … After about a month you realize ‘I guess this only prints in ugly-coloured plastic’ and ‘my printer keeps jamming’ and you’ve printed a lot of Yoda heads and keychain-whatever things … there’s an aspect of the technology that is promising, but it comes with a lot of fine print.” —Garnet Hertz

In the first session NASCAD researcher Sandra Alfoldy drew on the research around her in-progress book to contrast two (polar) opposite forms of ‘craftwashing’ that are prominent in contemporary culture. On one hand you’ve got creators, who, through the democratization of new tools and techniques, can integrate new tools (desktop CNC machines, 3D printers, etc.) into their workflows. In these cases, the technology is enmeshed in their practice and helps them articulate their vision and they are in full control of their process and the means of production. On the other end of the scale spectrum, she pointed how corporations (from nationwide pizza chains to automakers) weave the idea of ‘craft’ into how they communicate their products. “Handcrafted, made by hand, artisanal, made with love, small batch” – all words and phrases whose meaning has been diluted by overuse.

Garnet Hertz was also on hand to (playfully) problematize our thinking around craft and making. Sardonically, he sketched out the various phases of our relationship with emerging tools – and likened it to a relationship that starts as unadulterated passion, gradually atrophies, and then fades into routine (“a domestic relationship”). The metaphor is certainly apt as the seductive appeal of new tools and technology – of novelty itself – is undeniable and so much of the enthusiasm around making (parents rabid about new models of STEAM education, the halcyon days of the Kickstarter widget economy, ‘third industrial revolution’ hyperbole, etc.) is completely uncritical. Hertz’ talk offered a concise introduction to his thinking and it touched on many of the ideas that coursed through Critical Making, his (highly recommended) 2012 zine projet.

“Instead of it being locked in the back rooms of a particular faculty or department, our lab is open to the whole university. We’re dealing with questions like ‘who will be using the space?’ and ‘how do we teach people to use the tools?’” —Tom Bessai

“If you don’t have a mutual agreement about which types of behaviours are agreeable or not okay within your space, when something not so great happens, that places the burden of responsibility on the person that has been hurt. And if you want to cultivate diverse space, which I would argue is innovative space, then you need to make it as welcoming as possible for folks from different backgrounds and experiences.” —Sarah Brin

A few of the folks at Unhanded the facilitators and directors of labs and makerspaces. Representing Ryerson University’s sprawling Zone Learning Initiative, Tom Bessai spoke to his conception of “the digifab ecosystem” and the types of conerns that go into setting up a space; it’s isn’t just about procurement or layout, these spaces are incubators of culture as well. Bessai spoke to his experience as the Managing Director of Toronto’s Design Fabrication Zone and his interest in helping architects obtain a better-informed relationship with emerging technologies, and catalyzing projects (and products) across a community of studios, startups, researchers, and students.

Sarah Brin gave a presentation on her time at the (curatorial) helm of AutoDesk’s Pier 9 artist-in-residency program, which brought creators into the company’s state-of-the-art eastern shoreline facilities in San Francisco. Providing financial support and engineering expertise, the program invited a number of artists (Morehshin Allahyari, Madeline Gannon, Scott Kildall, etc.) to do research and document their output as instructables and AutoDesk-produced ‘making of’ videos (which conveniently promote the software conglomerate as a benevolent force, huzzah!). While Brin had moved on from the role by the time of Unhanded, her talk revealed the pluralistic and interdisciplinary thinking behind one of the most influential residency programs of the myriad such corporate/creative initiatives to have emerged in recent years.

I was tasked with leading a session with Brin and James Hayes as discussants. We were fortunate to have the juiciest of questions: what are the opportunities when the abstract world of computing encounters the material world? In my introduction I drew parallels between the anxieties prominent around algorithmic design with those related to broader automation – and elucidated how a few precedents foregrounded related confusion and contention. I thought the conversation took us to some interesting places, my only regret about the session was that Del Harrow was unable to join us (as scheduled) and provide a (needed) artist’s perspective to open up the exchange a little more.

The Vimeo channel for the four sessions is below and I recommend taking in the entire proceedings, as Unhanded was undoubtedly one of the most interesting events I attended last year. Beyond the moments highlighted above, I have to give credit to Steven Loft, Director of Indigenous Arts at the Canada Council for the Art for his superb introduction to the kickoff session (embedded below, watch it!) in which he zoomed out from the usual conversations of ‘aura’, and offered a wide-angle view of making. “For me, making is about relationships. To the earth, to the lands, to the environs – and the beings we share it with.” His holistic perspective on craft initiated a stellar day of brainstorming and now serves as an ideal conclusion to this summary. 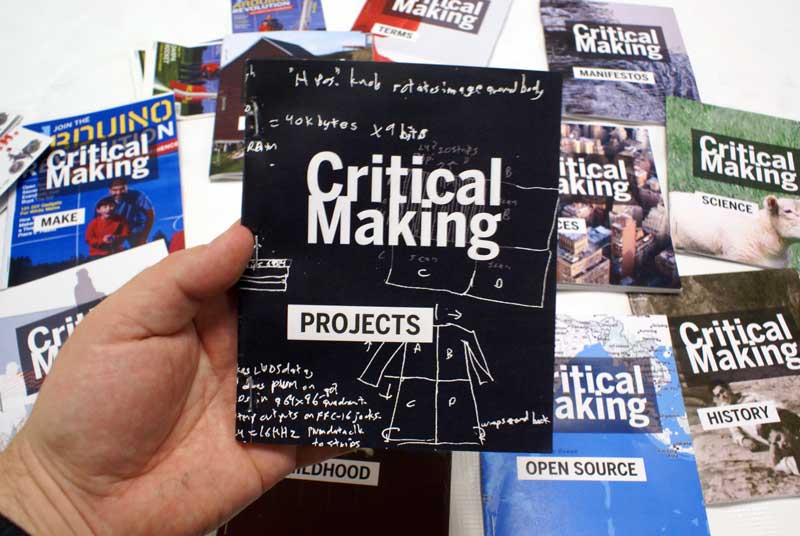