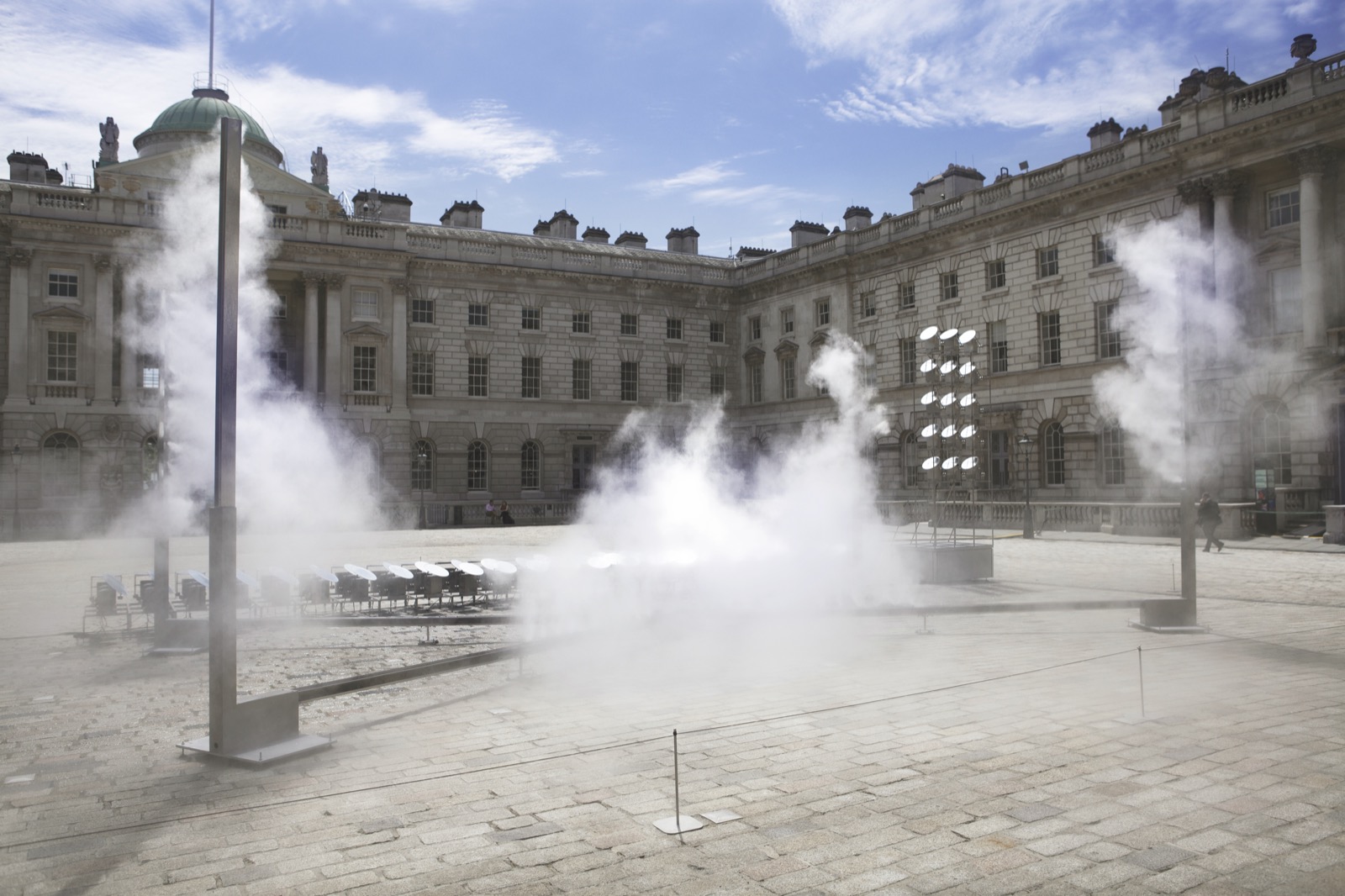 Created by Kimchi and Chips and currently on view at the Somerset House in London, HALO is a new installation in the series of works by the Seoul based Mimi Son and Elliot Woods where light is sculpted to create form that exists between material and immaterial.

The installation is comprised of over 100 motorised mirrors spread across two 4-metre-high towers and one 15-metre-long track that move in line with the sun throughout the day and redirect the sun rays to draw a halo, formed entirely of natural light and floating in mid-air made visible by fine water jets in the cloud of mist. It is for the first time that Kimchi and Chips focus fully on natural, rather than artificial light, bringing the sun down to earth wholly depending upon the strength of the sun, creating an experience which constantly evolves and to which the artists have to respond daily.

Next to the courtyard, an open studio reveals the inner workings and ideas of the ingenious installation, with the opportunity to meet the team behind it on special occasions. This space also showcases various prototypes and sketches as well as previous works of Kimchi and Chips including some works already familiar to CAN audience. 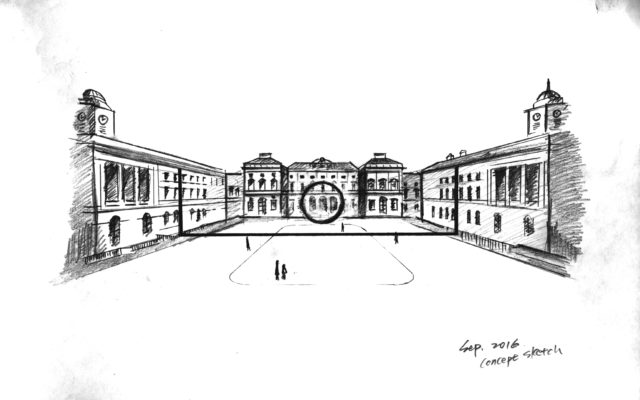 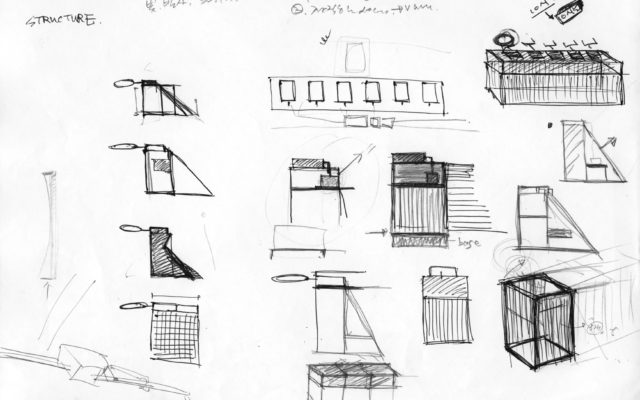 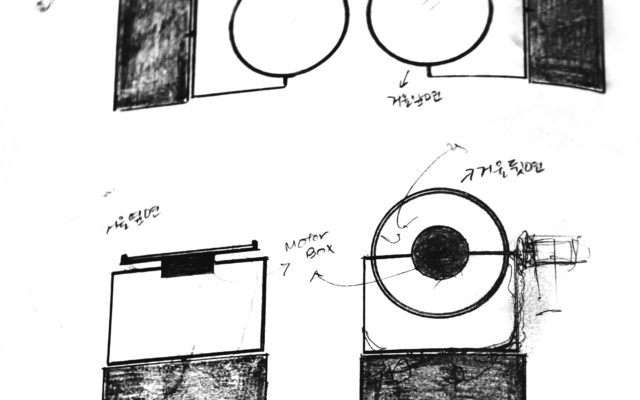 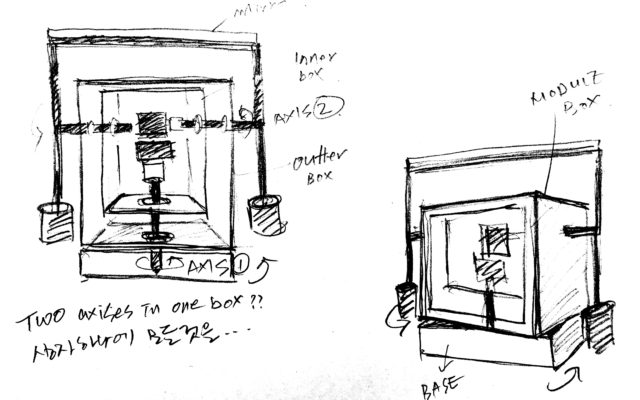 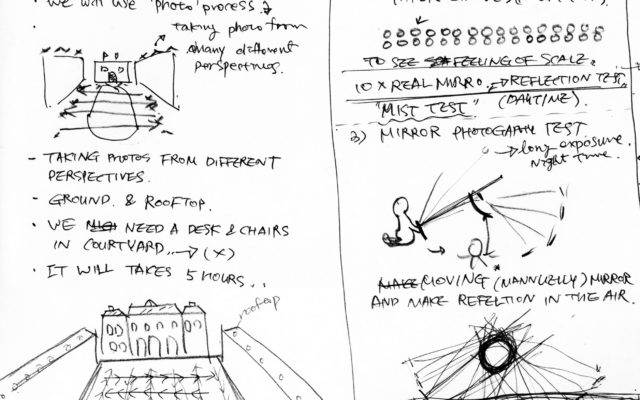 The project went through a number of different stages of development, starting with leftover projector brackets and welded laser cut parts to the final version we see today at Somerset House. At the Gwangju Biennale the team built over 200 twin axis units using laser cut s/s that relied on Orange Pi 4-Core Linux MCU, custom PCBs, accelerometers, arduino nanos, temperature and humidity sensors, encoders and timing belts. Sadly there were just way too many parts to fail and the waterproofing did not work particularly well. This led to a smart servo version that included custom PCB with ARM SAMD21, similar motor and additional parts but there were concerns about having enough time to iterate. Finally the team settled on the Dynamixel MX-64AR with flexible shaft coupler for both axes which are combined into single stainless box with improved water resistance design and double walls and internal pathways for drainage. 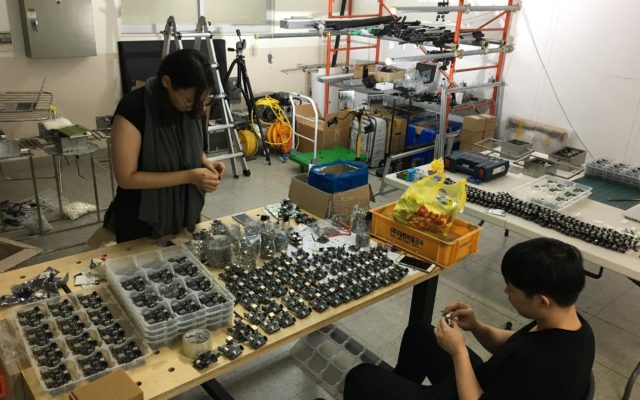 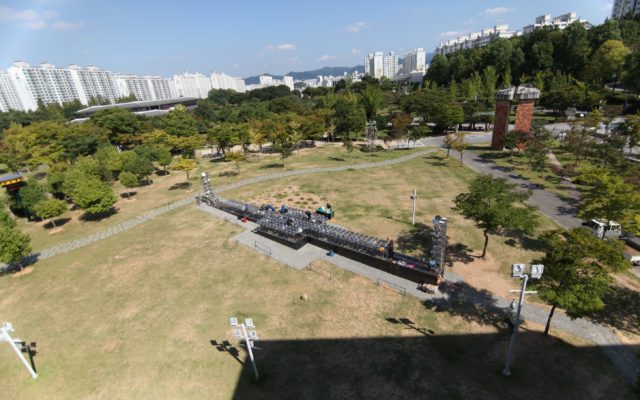 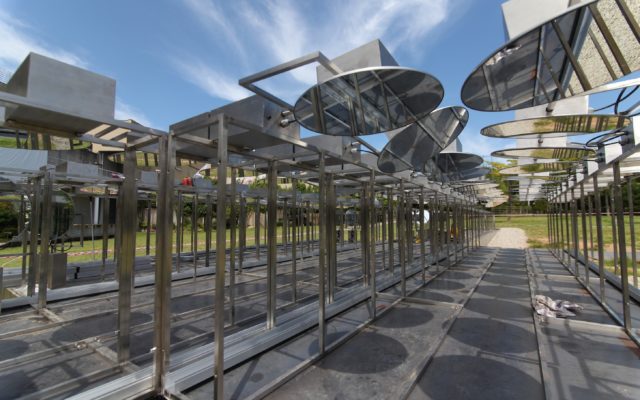 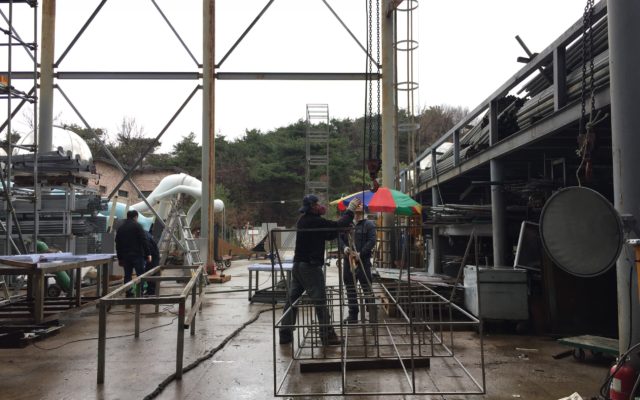 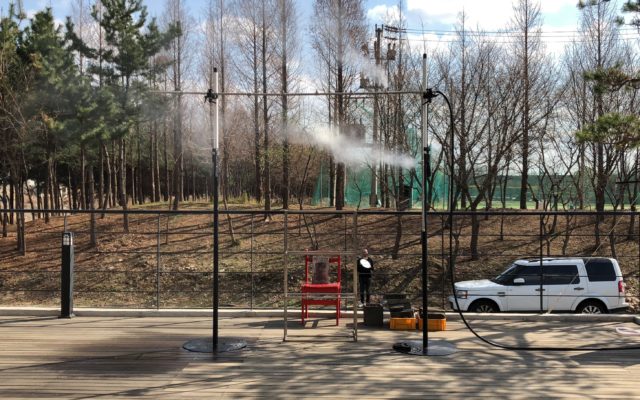 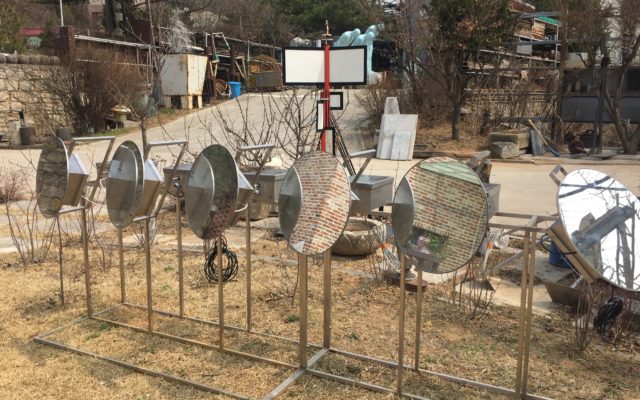 In order to achieve a clear halo, the duo needed to train a mathematical model of each heliostat which accommodates for its known physical attributes, and an allowance for unknown distortions. This mathematical model (titled Heliostat Action Model – HAM) has a set of parameters which are unique for each heliostat such as position, rotation, axis offsets and polynomial correction parameters. In order to learn the parameters for each Heliostat they capture data from the physical system using their own custom developed Rulr framework. 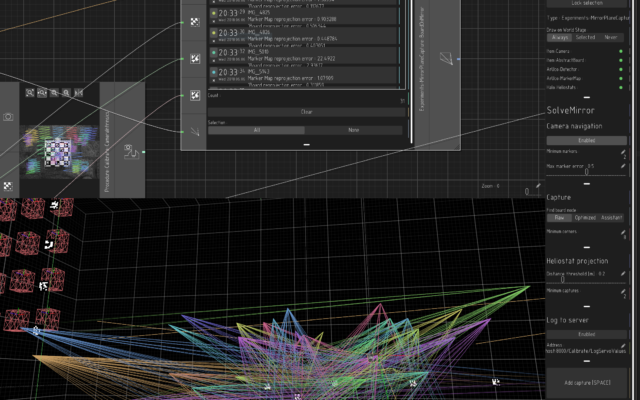 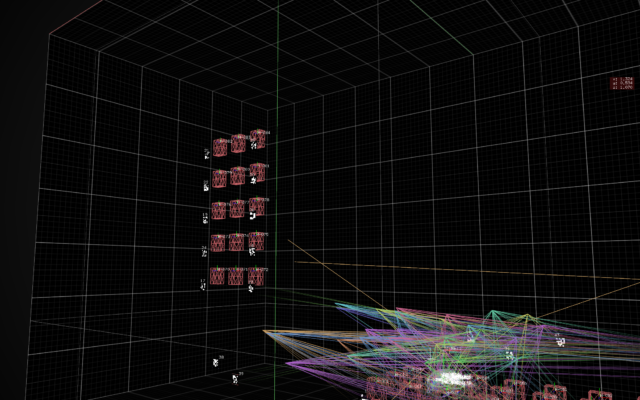 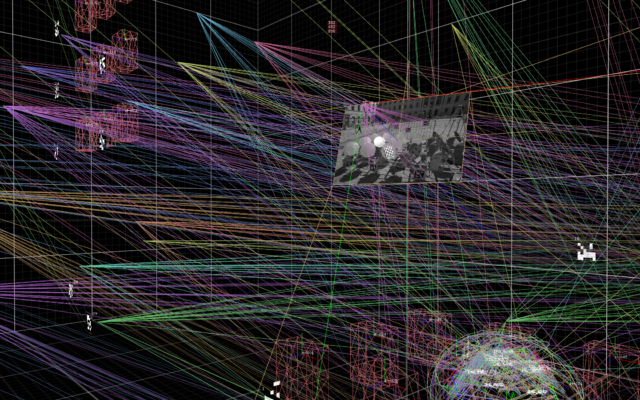 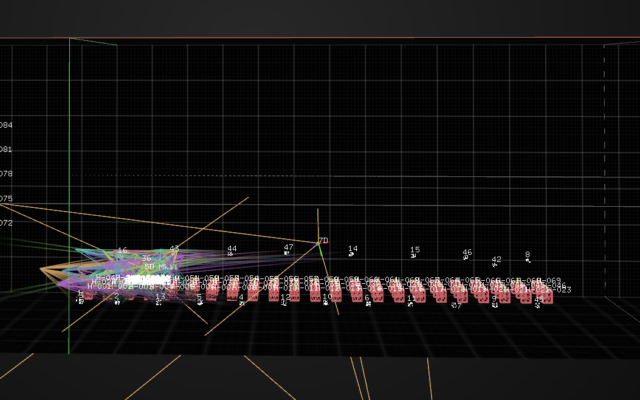 Kimchi and Chips collaborated with the scientific research division of London based Improbable Worlds Limited to develop and train the HAM. Improbable specialise in virtual simulations and are one of the UK’s largest startups. Halo utilises Improbable’s recently released Bayesian Inference based machine learning engine titled ‘Keanu’ (a play on the name of the popular deep learning library ‘Theano’). 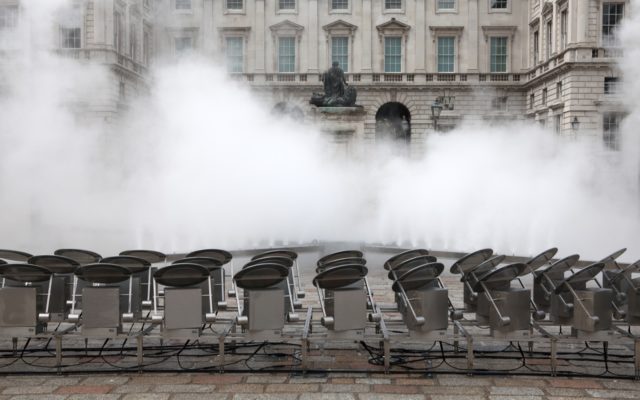 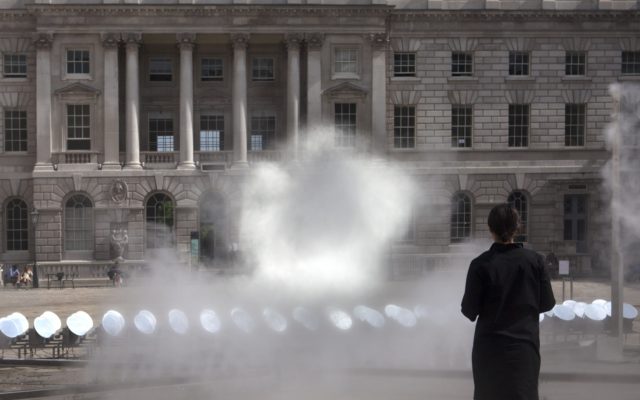 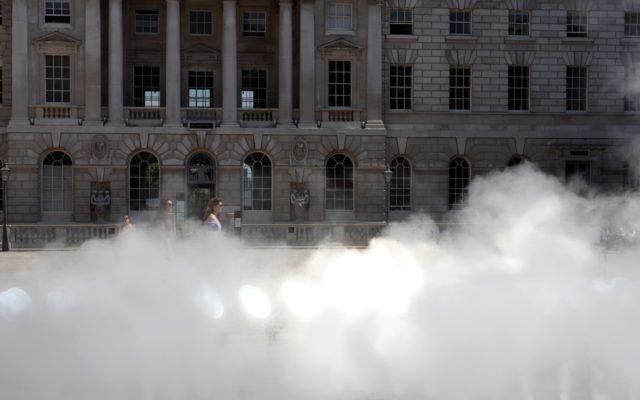 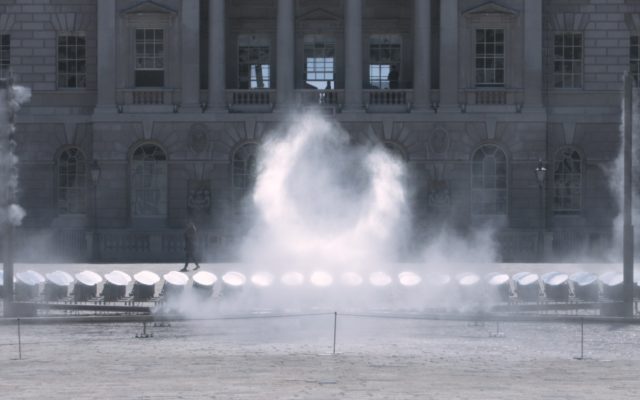 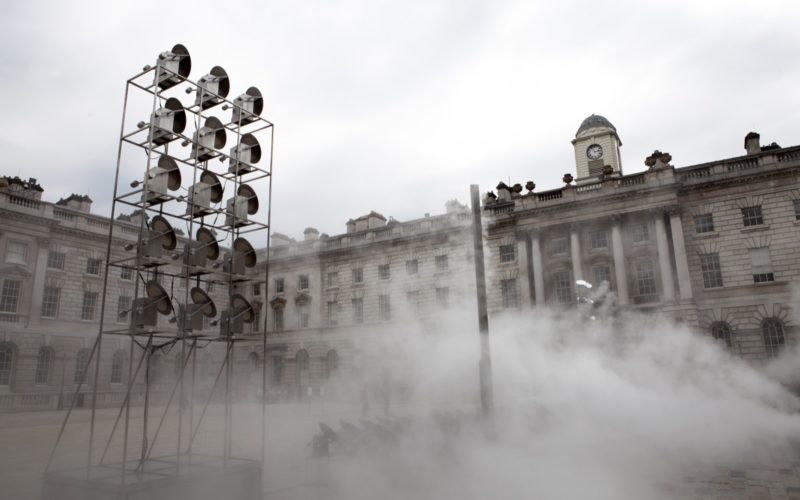 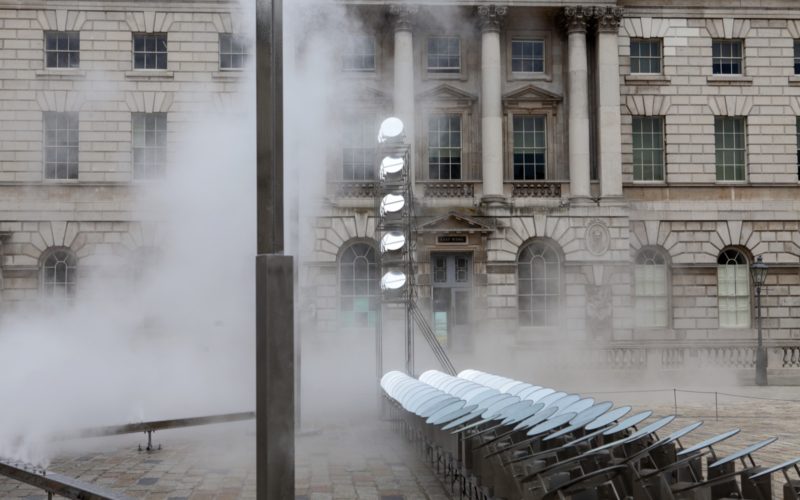 c74 is an iPhone app that let's you connect your device with Cycling '74's Max/MSP 5 and create custom layouts which can be operated directly from your iPhone. In…