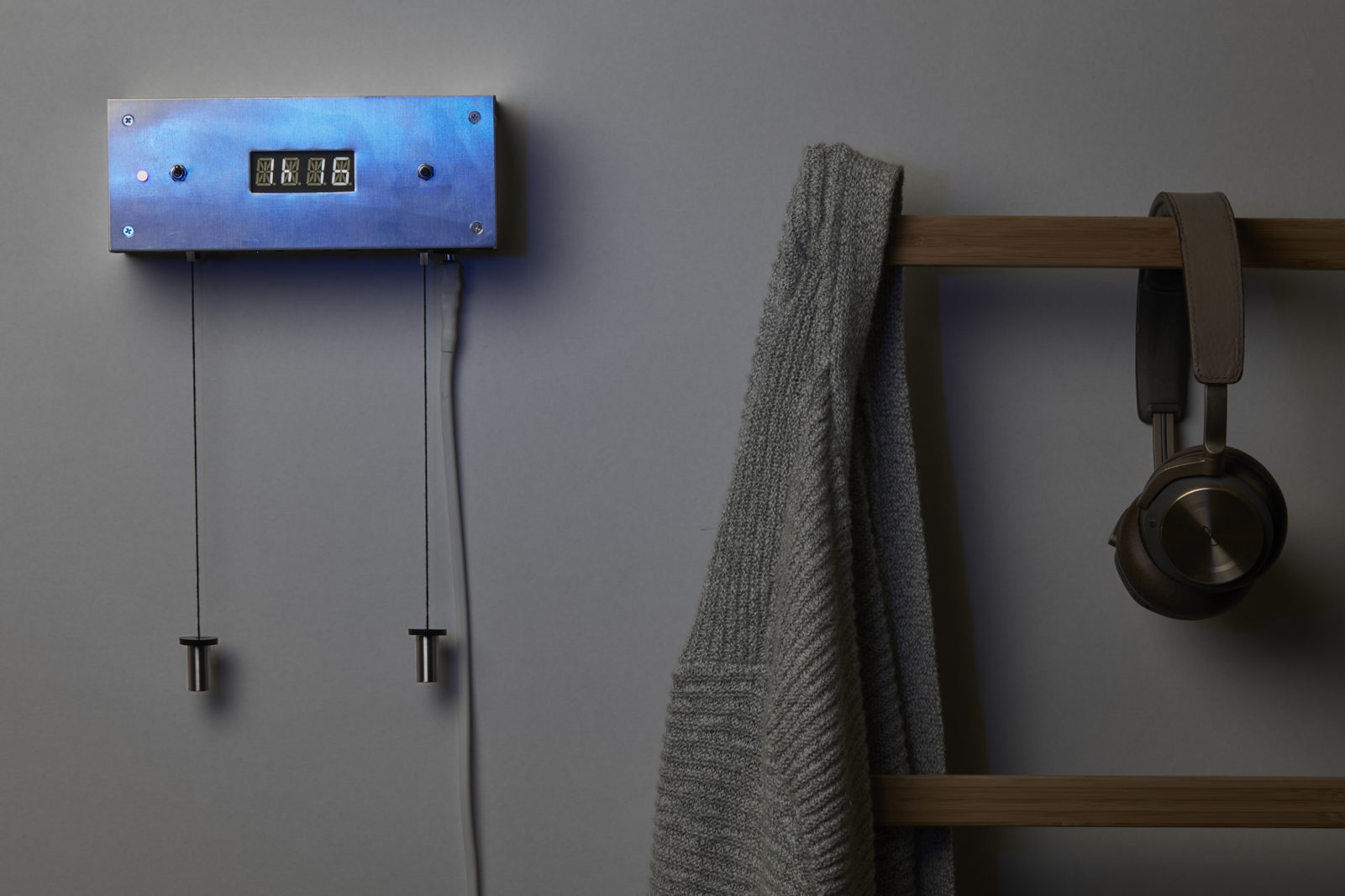 Created by Giulio Barresi at ECAL (Media and Interaction Design Unit), Connected Tools is a series of objects that explore alternative rituals that could lead to a more reasonable consumption of mobile technologies. Opposite to software solutions (Apple’s iOS 12 update), these hardware devices are designed to create a physical distance between the smartphones and the user.

The first tool in the Connected Humans collection is x01 Focus Tool, designed to help users be less distracted by the massive amount of notifications they are receiving daily on their phones. It actively blocks and deletes unnecessary notifications before they even have the time to be displayed. Focus Tool can also be programmed to be less harmful to these distractions depending on how busy the user is. The second tool is x02 Awareness Tool, device that tracks the time spent on the device using a goal for the day. Users can try to spend less time on their screens and beat their friends’ scores. The third and final tool is xO3 Social Tool,  designed for restaurants, helps users get more involved in the moment and with the people around them – plus it charges their phones. 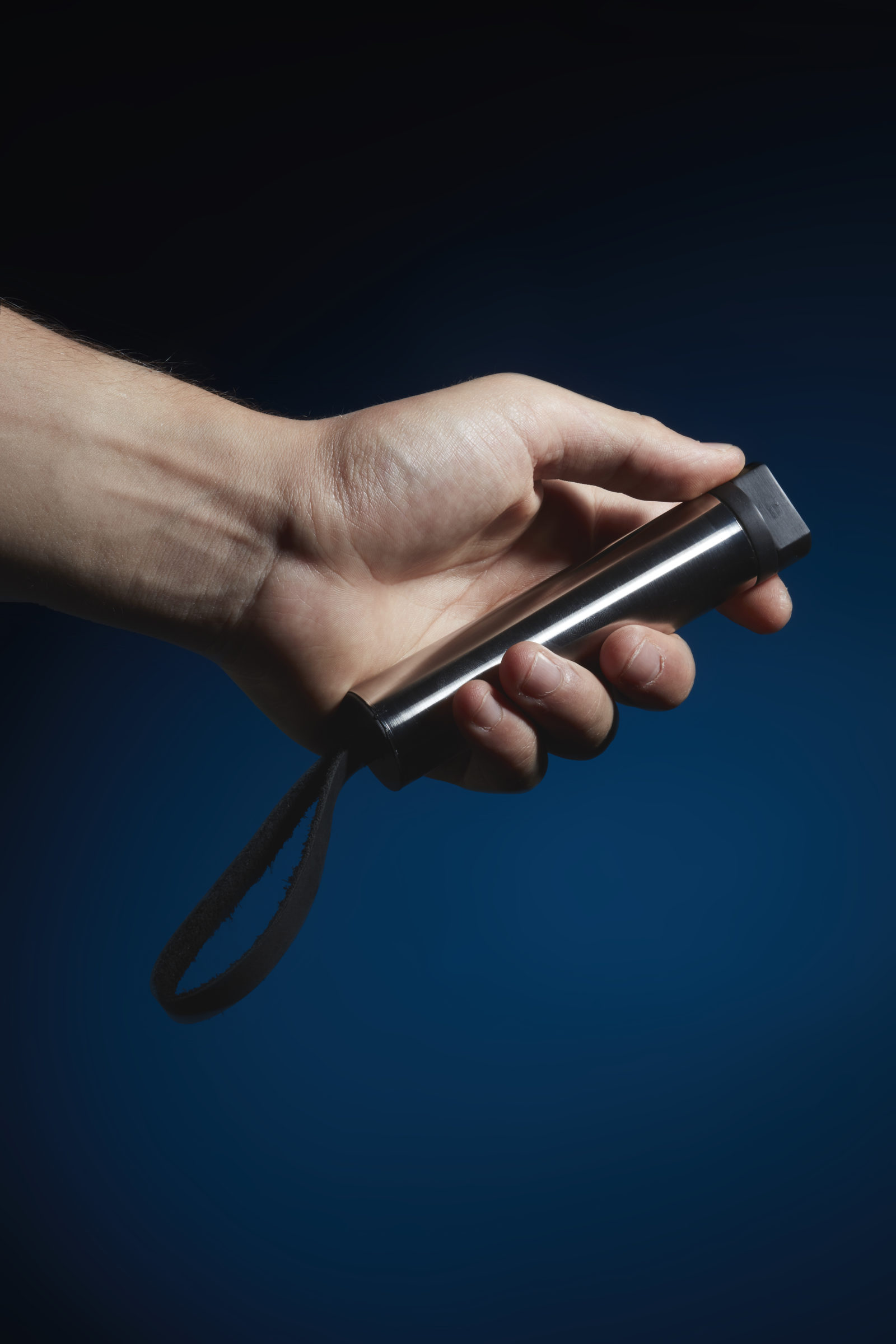 x01 Focus Tool runs on Adafruit Feather NRF52 BLE chip, supporting Apple Notification Center Services (ANCS). It includes custom made wheel button, based on a limitless potentiometer and magnetic contacts, allowing a smooth transition between each mode. Visual feedback is provided from a single LED, stating battery level ( continuous flash = low bat), or current focus mode. The device also includes haptic feedback thanks to a 3.3V vibrating motor and is powered with a 145’00 mAh Lithium-ion for long-lasting autonomy. The design is achieved using a stainless Steel tube, closed with custom 3D printed Cap, lather band for an easy and safe manipulation and custom 3D printed wheel button to enclose the potentiometer – all sanded for smooth finish. Software was built on Adafruit ANCS arduino example,  and the Nordi NRF52 BLE chip is similar to the ones used in smartwatches. It natively integrates communication between iOs device and the chip. No software was developed for the communication between the iOS device and the board. It uses local BLE communication . The user just has to pair the device with the iOS device in the preferences. ANCS protocol obliges the iOS developed to classify their app in certain categories (Social, Location, Reminder, Fitness, Finance & Business, etc.). Each category has a code. Depending on the focus level requested by the user, notifications with a certain type of code would be marked as “read” by the Adafruit NRF52 BLE chip. Which would result in deleting the notification from lock screen / notification center. (Note : BLE ANCS communication only supports 20 notifications at the time. If the control center contains more than 20 notifications, the board is not capable to handle the notifications correctly.) 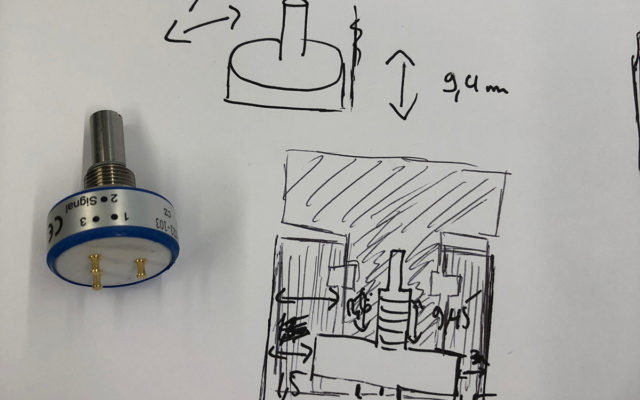 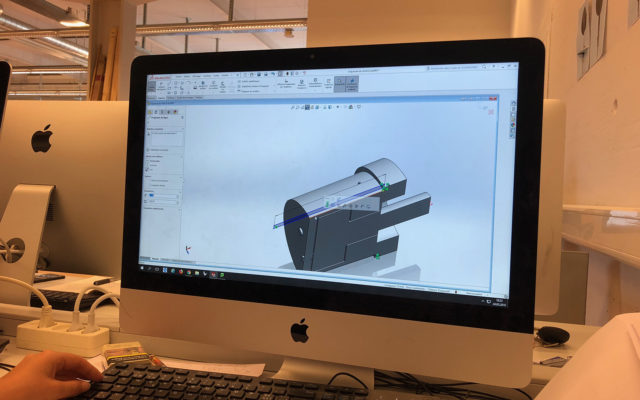 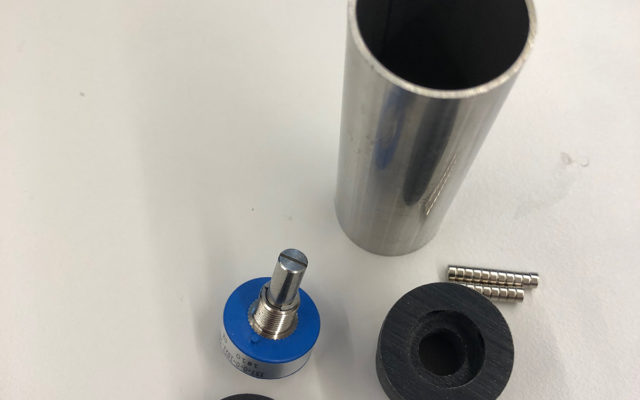 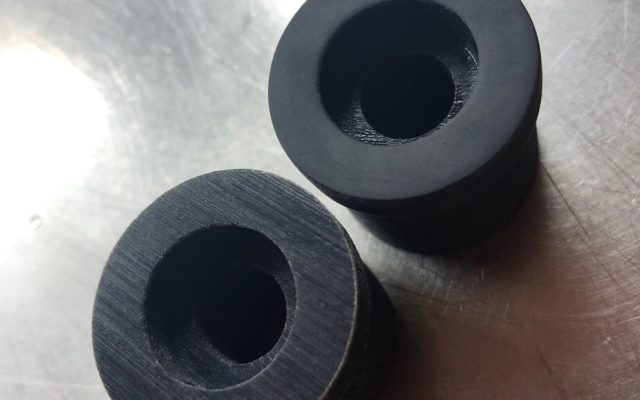 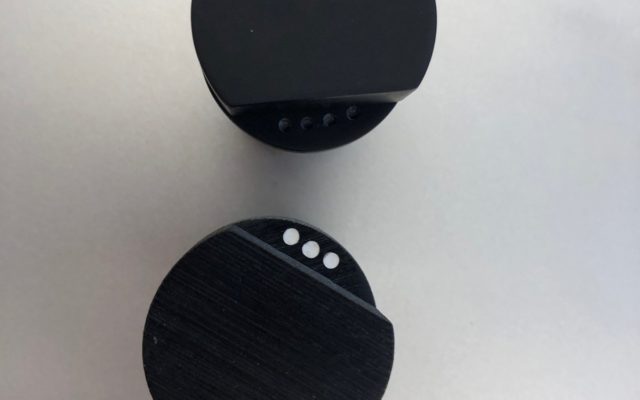 ↑ The making of x01 Focus Tool 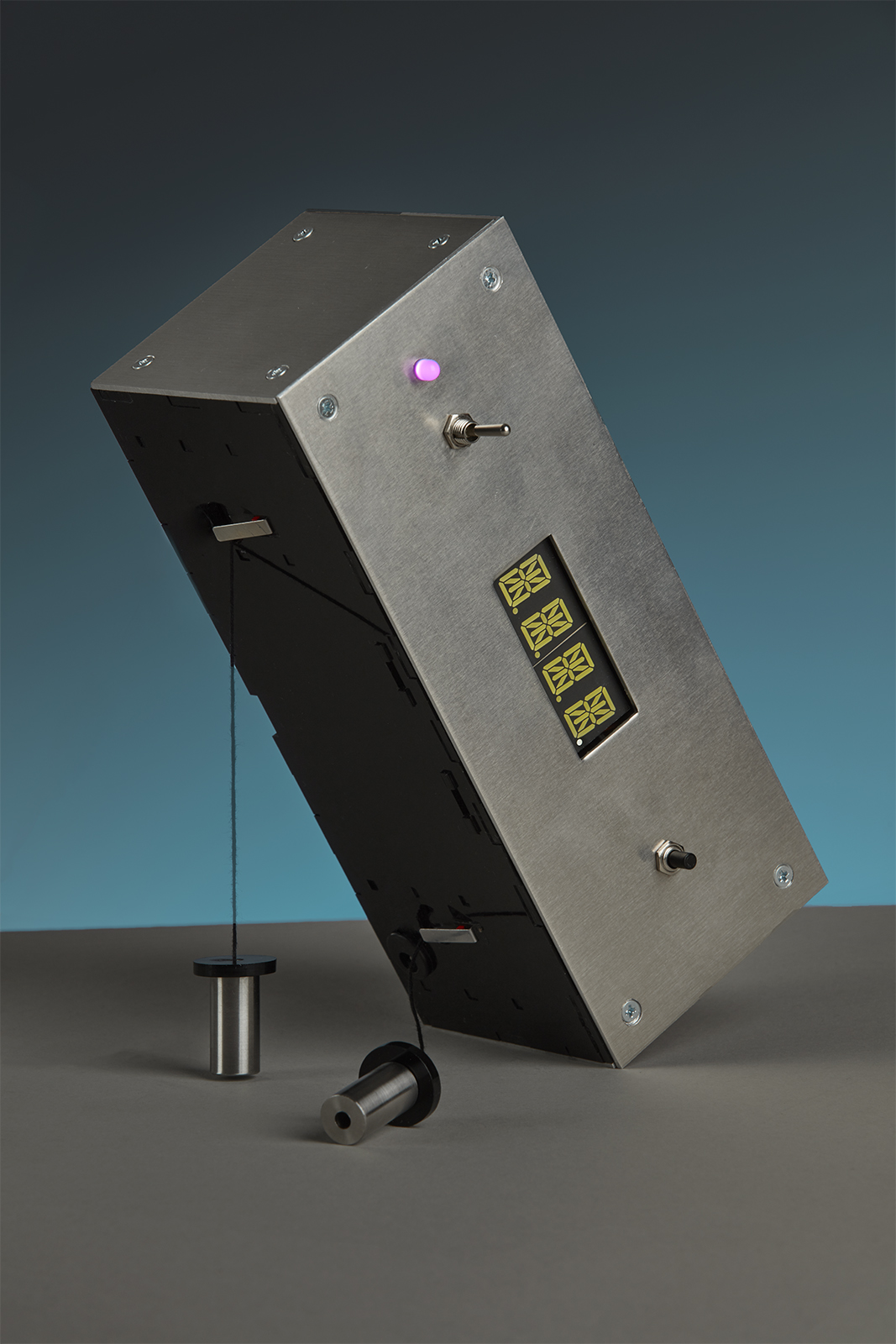 x02 Awareness Tool runs on ESP32 Dev Module and uses two 12V Stepper Motors driven with two easy Drivers. Also included is a CUI encoder for Stepper motor to monitor the users dragging – Adafruit Quad Alphanumeric Display as visual Feedback and then a smooth push button to navigate between the different modes – Old style switch power button, as well as a power state LED. The enclose is made with black 3mm laser cut plexiglass plates covered with 6082 aluminium alloy plates of 1.5mm thickness. The aluminium plates were screwed PZ2 screws in the plexiglass, giving an industrial look. A Swift iOS app was developed to check whenever the user would use his/her phone. The technique used was to check if the keychain had been unlocked every 10sec. Keychain opens when the phone is unlocked by the user and remains open for 10 seconds. To be able to run the app in the background, location services have to always remain activated, although location is not used at all in the project. This is a limitation of iOS. The app uploads the amount of time spent on the phone to a database. Two values are stored : actual performance, and average performance. The ESP32 connects to the Internet and downloads the actual and average performance. The users can then check the results on the screen have a visual comparison with their goal thanks to the pendents. 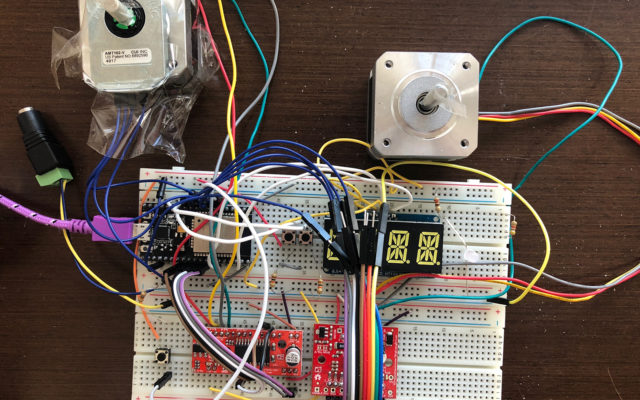 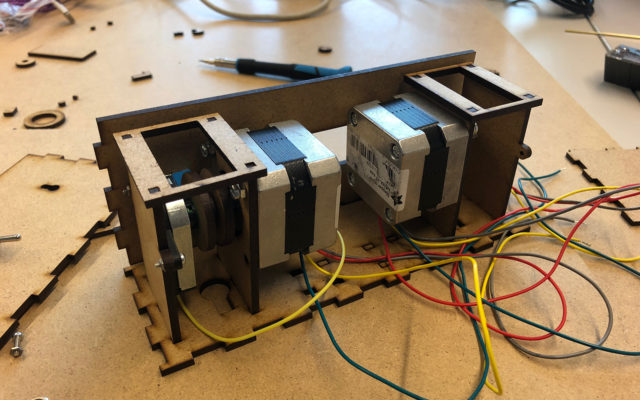 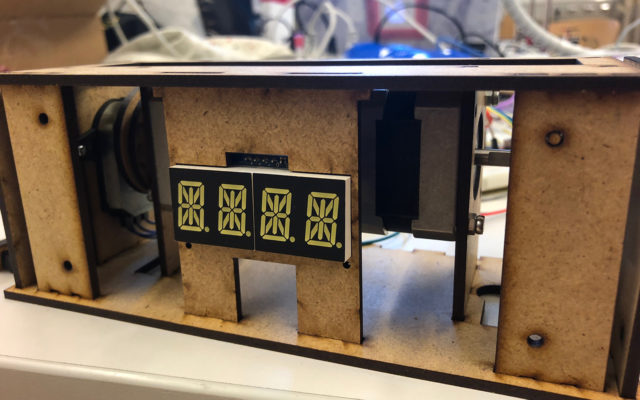 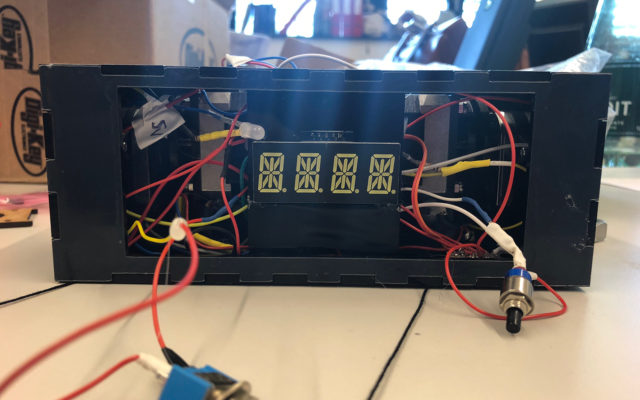 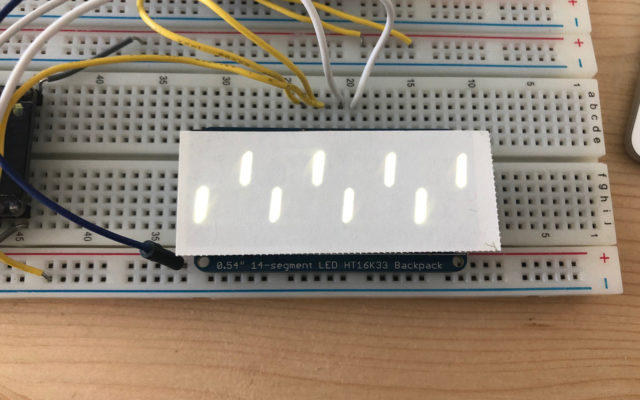 ↑ The making of x02 Awareness Tool 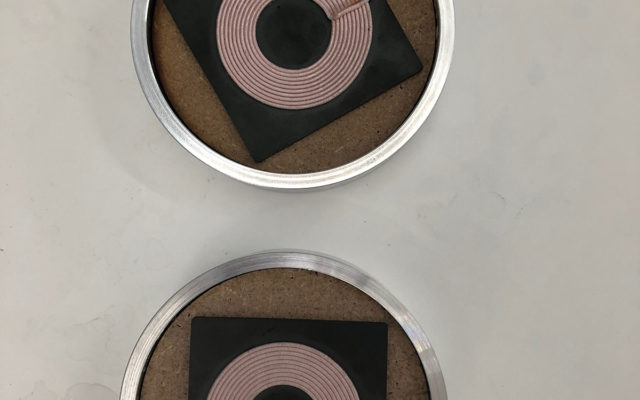 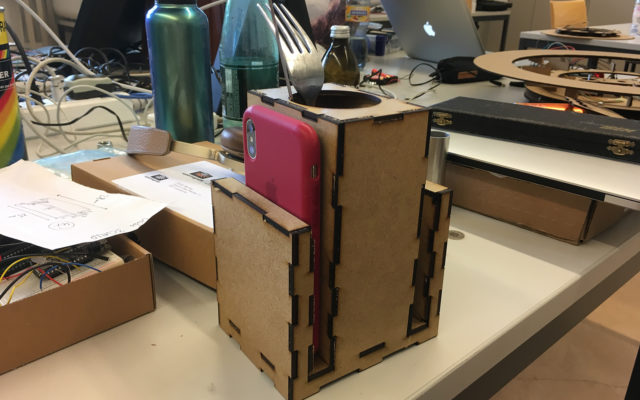 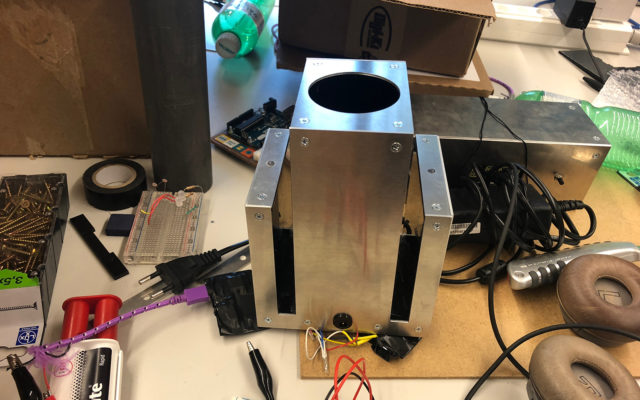 ↑ The making of x03 Social Tool 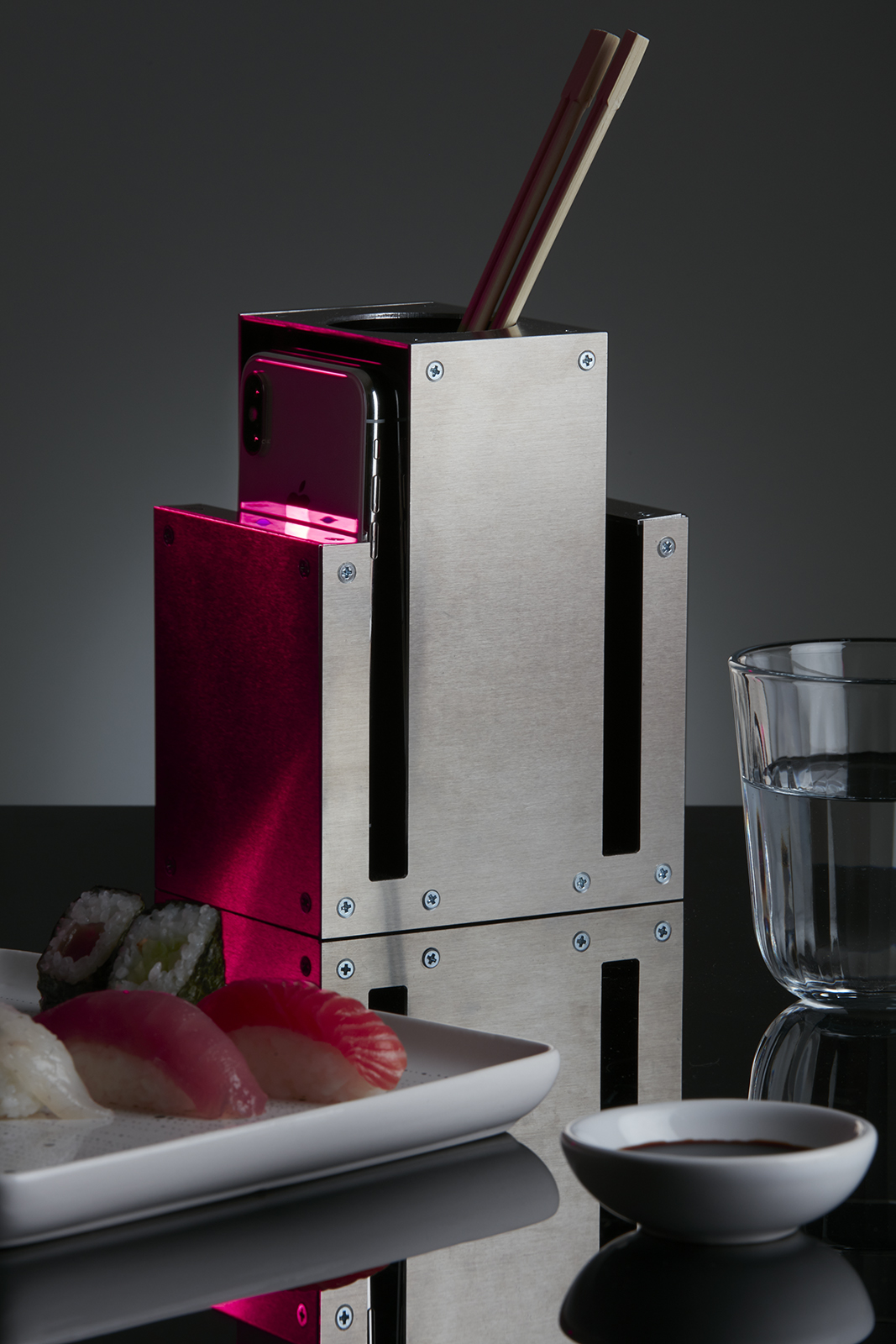 x03 Social Tool runs on ESP32 Dev Module and uses two Adafruit Wireless charging module, two photoresistors to detect charging state of charging module, two LED for user feedback (fading = ready to charge, blinking = phone removed during meal, fade out = phone is now charging). Each unit was separately charged to avoid excessive power noise. Device is made with black 3mm laser cut plexiglass plates covered with 6082 aluminium alloy plates of 1.5mm thickness. Du to the fact that some aluminium plates were CNC cut to provide extra precision between the smallest pieces, the 6082 alloy was needed to ensure a optimal cutting. The ESP32 logs the time the phone is out of the dock during the meal and uploads it to a server. Finally, a thermal printer collects the data and prints a ticket with relative informations about the percentage of time spent on the phone during the meal. 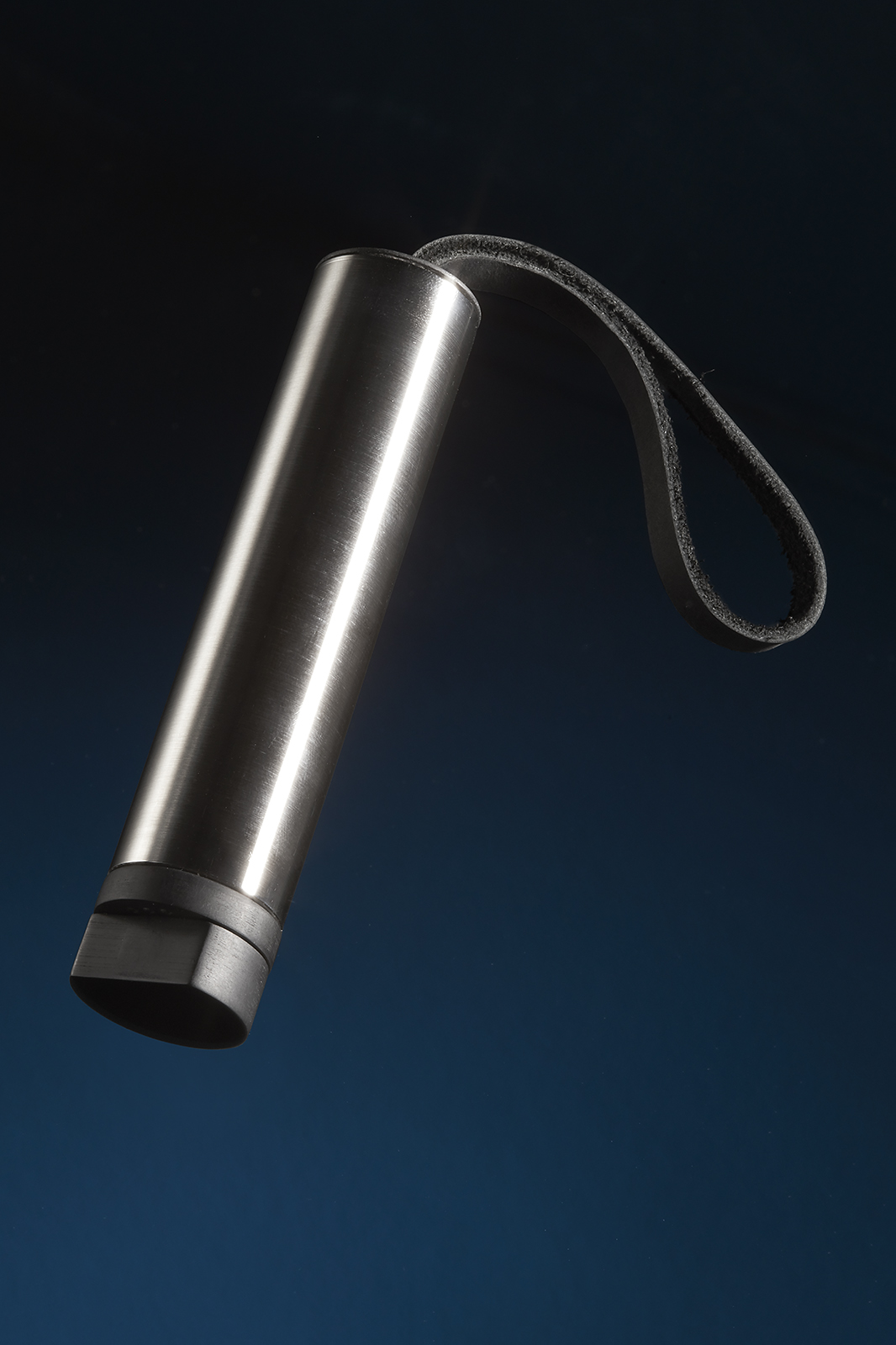 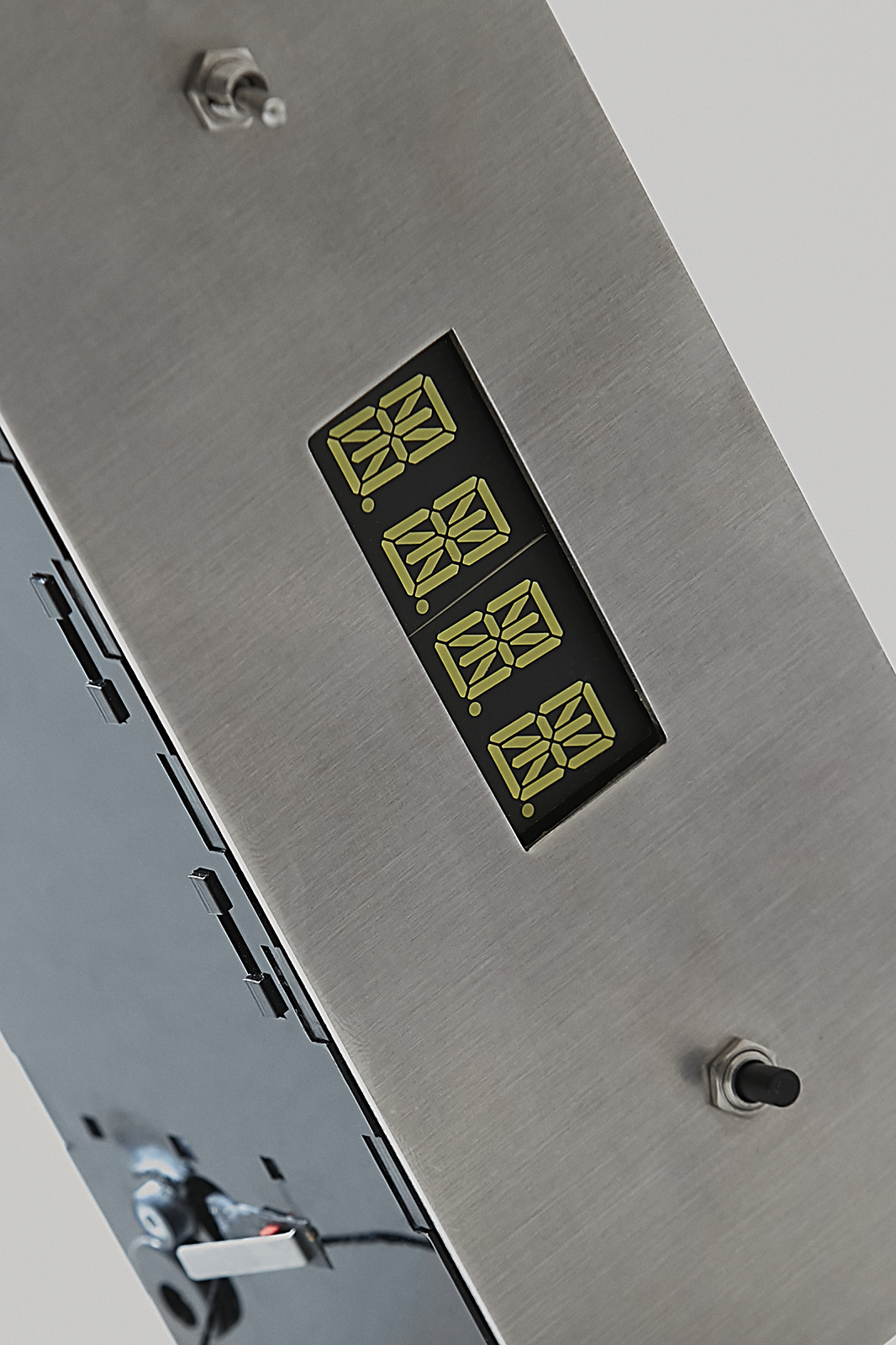 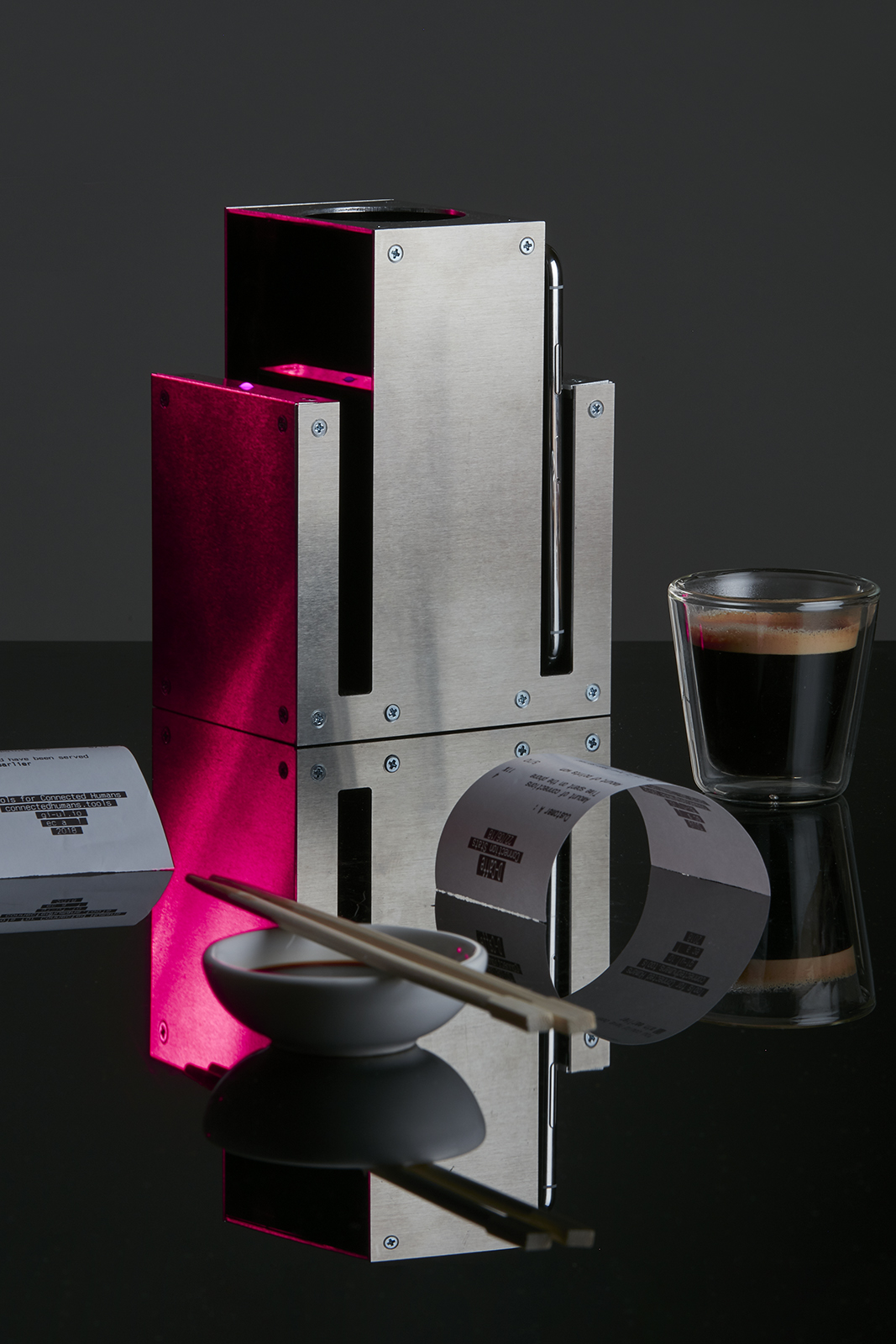 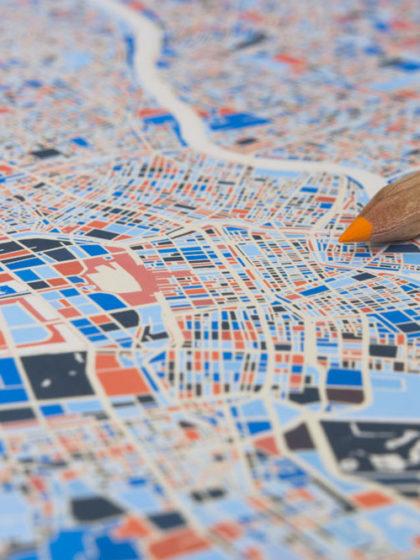 Created by David Hoe (Mini Cloud Studios) from London, and currently on Kickstarter, 'Modern Map Art Prints' is a collection of detailed maps transformed into colourful abstract art prints of anywhere in the…