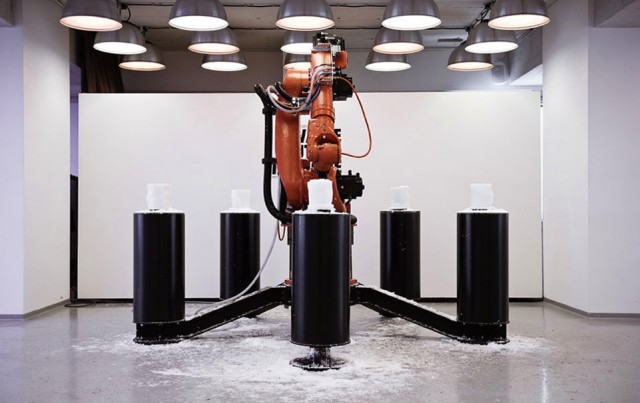 Valse Automatique is a design performance made to illustrate the symbiosis between humans and technology by translating music to form over the use of a kuka industrial robot. Invited to the project by Hermann Weizenegger - Stephan Thiel was responsible for designing the overall interface between the music by composer and violinist miki and the production process of the robot.Hermann’s vision, Stephan writes, consisted of five variations of a musical piece by MIKI represented in five objects. To address this vision, wax was chosen as a base material, since it allowed rapid manufacturing through milling and application of heat as well as a possible further use for casting. Thus, the performance was conceptualized as a two stages production process showing MIKI and a pianist along the robot manufacturing the objects. In a pre-performance process, the wax base shapes were milled to reflect the musical atmosphere, in the second process the robot finalized the objects with the use of a Bunsen burner in reaction to MIKI’s play.