#NaotoHieda is an artwork around a computer program and a body. A screenshot of a performance using the artist’s body and a custom-made web editor for live-coding is printed as a large construction banner. Currently, it is on view at a group exhibition at Pola Museum Annex in Tokyo, Japan from February 11 to March 13, 2022.

Hieda has started several online collaborations extensively since 2020. Best Practices In Contemporary Dance is an ongoing exploration of queer conversation between technology and bodies with Jorge Guevara, a dancer, choreographer, designer and artist. With digital artist Flor de Fuego, GlitchMe is a playground for code and glitch traversing materiality and digitality. Both projects uses Hydra, a live-coding environment for networked visuals, created by Olivia Jack for visuals, and Hieda has been actively contributing to Hydra open-source project.

#NaotoHieda is the second iteration of performative live-coded banners. In July 2021, Hieda created two banners that are from screenshots of Best Practices in Contemporary Dance and are semi-permanently shown in a construction site in Cologne, Germany thanks to Christian Sievers (KHM) and ctrl-space seminar. While it was an experimental project to bring digital contents out of the screen to the physicality, the work gained traction for the uniqueness of the digitality and glitch in the wild and the presence of the artist. For the exhibition at Pola Museum Annex, since the artist was offered a space of 14 meters by 2 meters, they decided to make an ultra-wide banner piece. A full visual chronology can be found here.

The image was generated using a custom-made webpage based on Hydra. It has four live-coding editor slots to fit to the aspect ratio of the banner, and a slit-scan-like effect is created during the process of live-coding. The session of live-coding and improvisational dancing is recorded with OBS Studio at 3840 x 1080, and a snapshot of the video is used for ordering banner printing.

Hieda uses code as a queer expression instead of a productive tool, which is the way normally assumed. The nature of Hydra and live-coding often results in “glitches”: not necessarily visual glitches effects but unpredictable outputs. The work features the body, especially the face of the artist, printed large-scale. While inspired by artists such as Freeka Tet who explore the face as moving image in large projection, Hieda decided to use a static medium (printed banner), and at the same time, the work leaves the trace of dynamically created process as seen in the slit scan. Another reference is that mesh banners are often used for political campaigns and ceremonies in Karnataka because of its visibility and cost-effectiveness (Ravikumar Kashi “Flexing Muscles”). Since banners in Karnataka exhibits a rigid hierarchy based on the pictured people’s power and contribution, the question remains whether or not the work #NaotoHieda eliminated the hierarchy between the technology and body or created another relationship between them.

Hieda thanks Christian Sievers, Julia Scher and Romina Dümler for valuable feedback for conceptualizing the work. #NaotoHieda was made possible by the generous support of Shunsuke Takawo and Processing Community Japan (PCJ).

Photos by Pola Museum Annex and So Kanno 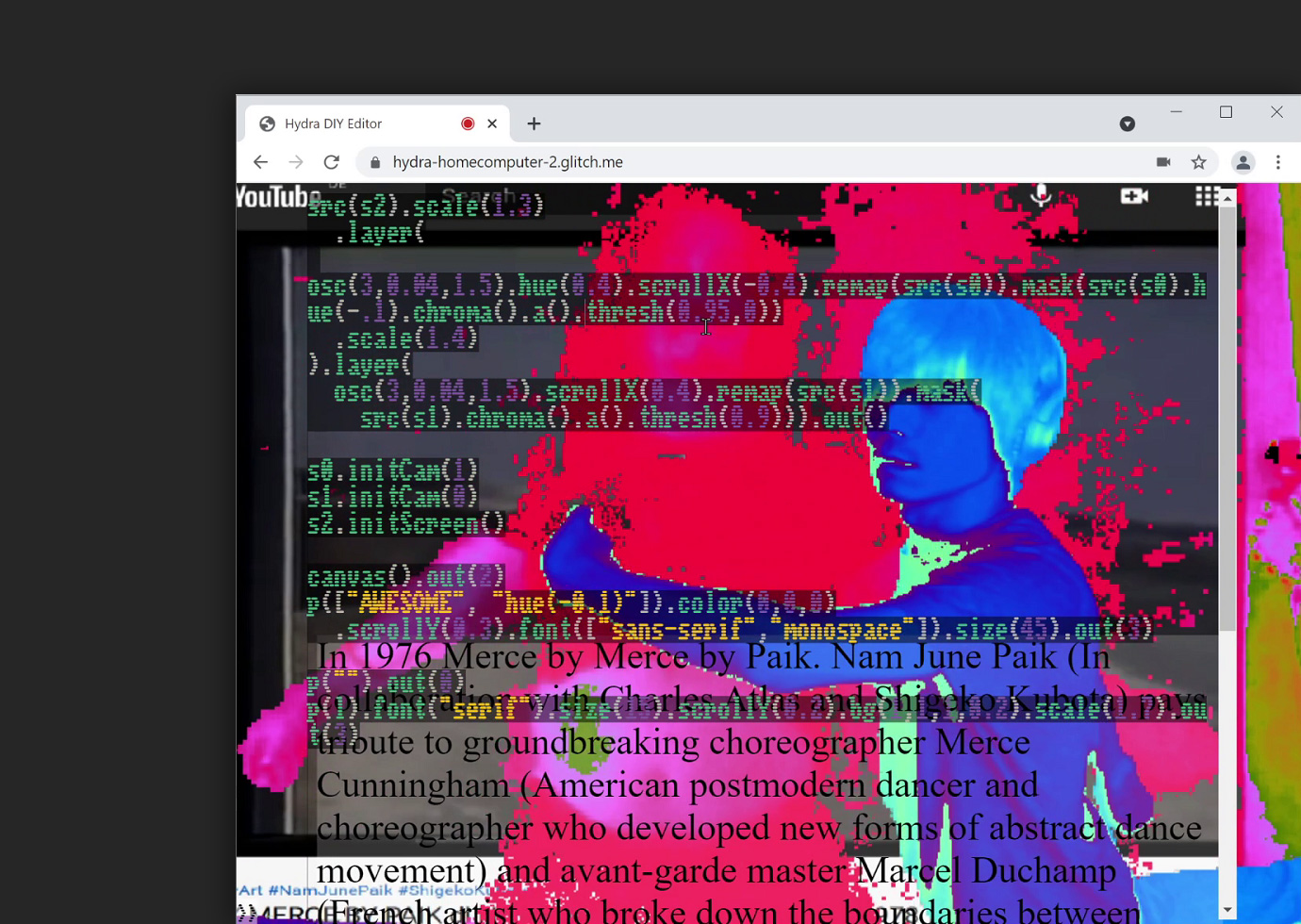 Best Practices in Contemporary Dance is a queer form of conversation between technology and bodies. Since April 2020, the beginning of 1st COVID-Lockdown, Jorge Guevara and Naoto Hieda meet weekly online to #practice for an hour: to distort and alter videos of themselves and each other, namely, in the pixel space. They do not define…