Created by Jayson Haebich, The Crystallisation Event explores a speculative future in which the endless digitisation and quantification of data has caused information to become supersaturated and begin a process of crystallisation. The project is presented as a speculative museum exhibit showing future artefacts from this post crystallised data world.

Presented at the end of the year MFA show at Goldsmiths University, the installation includes a number of artefacts that show both the physical results of the crystallisation process as well as digital information crystallising. The narrative describes how a crystalline structure is forming over our planet, emerging from digital data to create a new anthropogenic layer over technology. 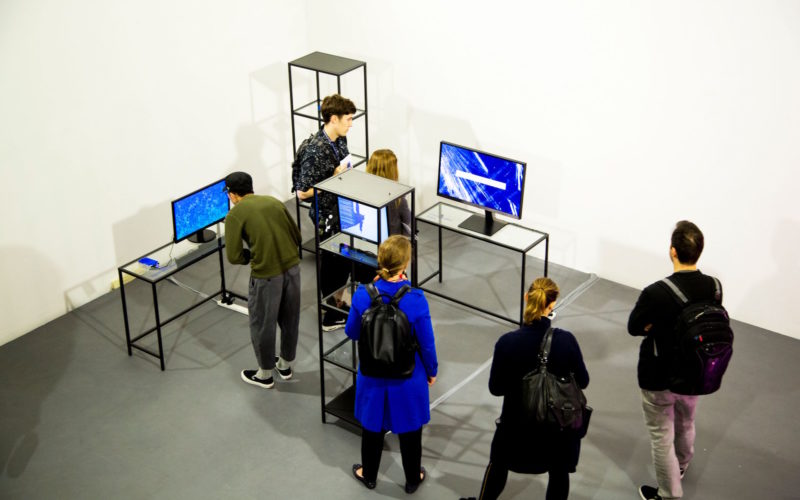 Using a kind of future speculative media archaeological approach the crystallisation event was examined as a process that has continued since deep time. Beginning with the minerals and elements that formed our physical world the process has permeated through all layers of our physical, digital and ontological world. With the crystallisation process being observed in everything from DNA structure and behaviour, investment and financial trading to the notion of time itself. These kinds of emergent systems are not just present in nature but in all kinds of complex systems including software and algorithms such as cellular automata, fractal mathematics, iterative algorithms and turmites. This kind of self organisational and self distributed behaviour is also evident on higher levels of abstraction in computation in the way in which peer to peer networks behave, data is organised in cloud servers and services such as facebook and google link information together.

The work is inspired by J G Ballards book “The Crystal World”. In the same way that Ballard’s book describes crystals taking over a remote corner of the jungle, Jayson is discussing a possible future in which crystals have crossed the digital/physical divide and emerged from data centres, hard drives, routers and other data rich media. These crystalline forms create their own new forms of information generated through the algorithmic, emergent behaviour of crystal growth.