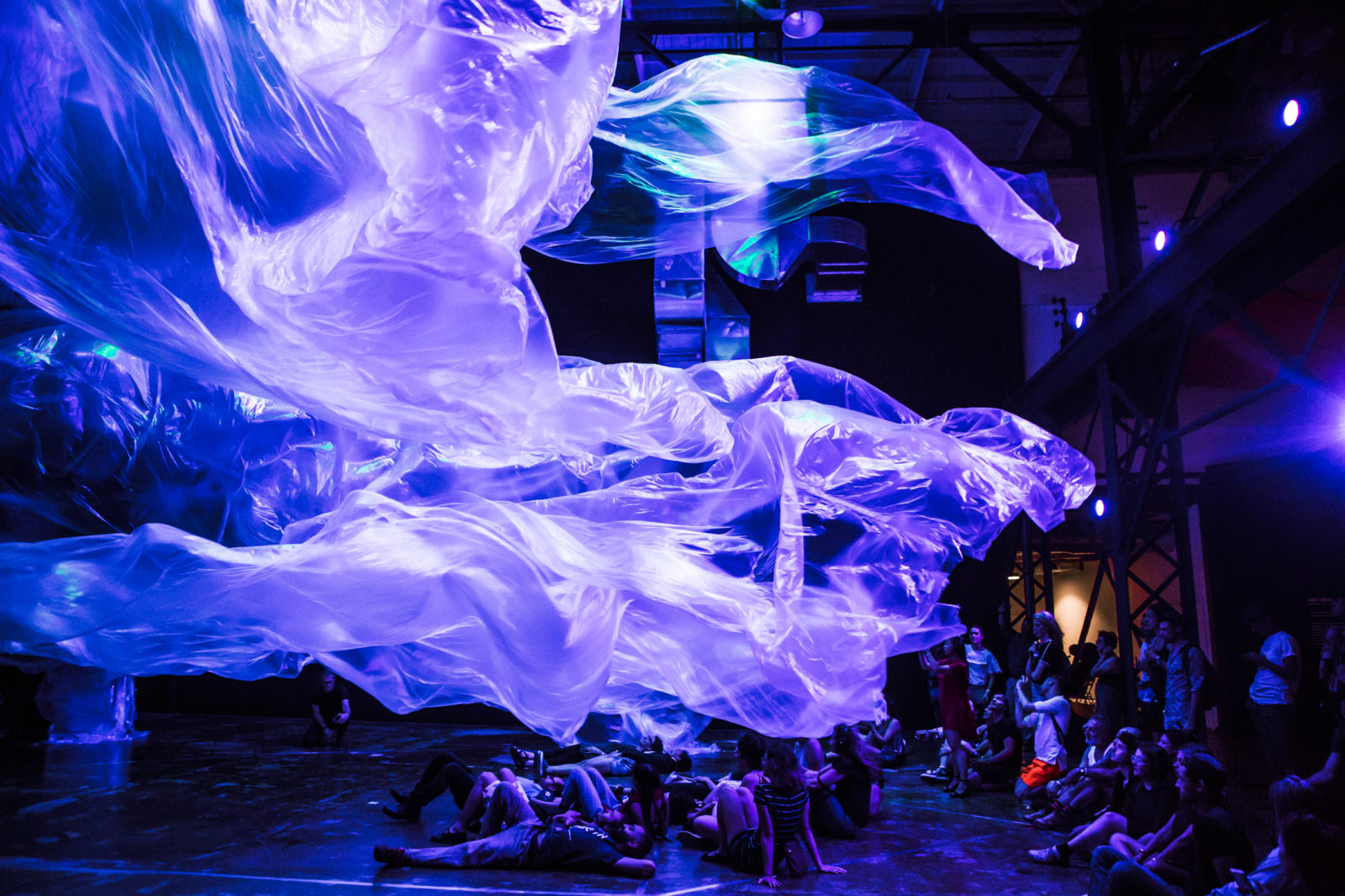 The 4th edition of the International Digital Art Biennial (BIAN) wraps up this week, and per previous editions it did not lack in ambition. Drawing on the momentum built over the last six years, and – in particular – the excellent last, third edition, this BIAN was dedicated to the theme ‘AUTOMATA: Sing the Body Electric.’ Storied curator, artist, and ZKM Center director Peter Weibel stepped in as guest curator, and helped assemble a vast and sprawling program with some three dozen artists spilling across multiple venues and a performance schedules. Today, we share photos and highlights (primarily) from the flagship exhibition at Arsenale Contemporary Art. 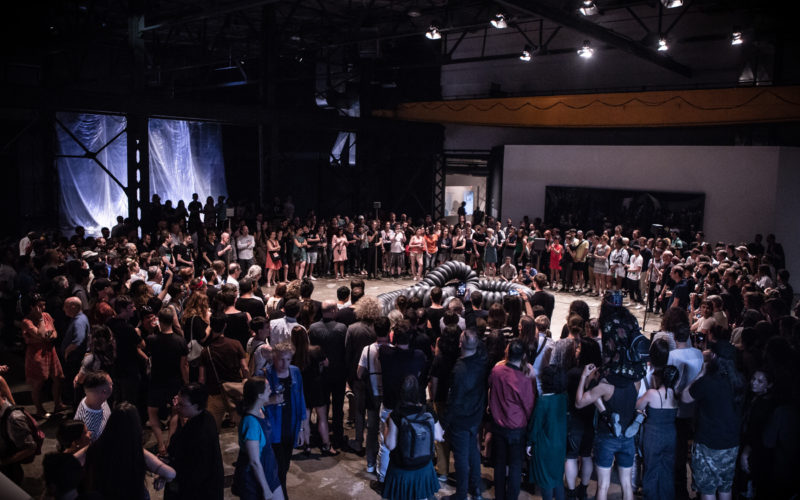 ↑ The centrepiece of the opening, COD.ACT’s πTon, a coiling, wriggling, undulating ‘sound snake’ commanded the rapt attention of all in attendance

For better and worse, BIAN has a few enduring tropes it circles around and back to with each edition. Nonhuman mechatronic forms (read: robots!) always pop up in various premutations, and one can count on encountering at least a half-dozen interactive installations. Guest curator Weibel acknowledges these ‘perennial interests’ nicely, and enlisted an A-list roster of talent to do so. Many artists featured on CAN over the years participated: Ralf Baecker conjured his signature Mirage, Addie Wagenknecht presented her industrialized provocation optimization of parenting, part 2, it was a treat to finally experience Daniel Rozin’s Wood Mirror in the flesh – and see drawings by Manfred Mohr. 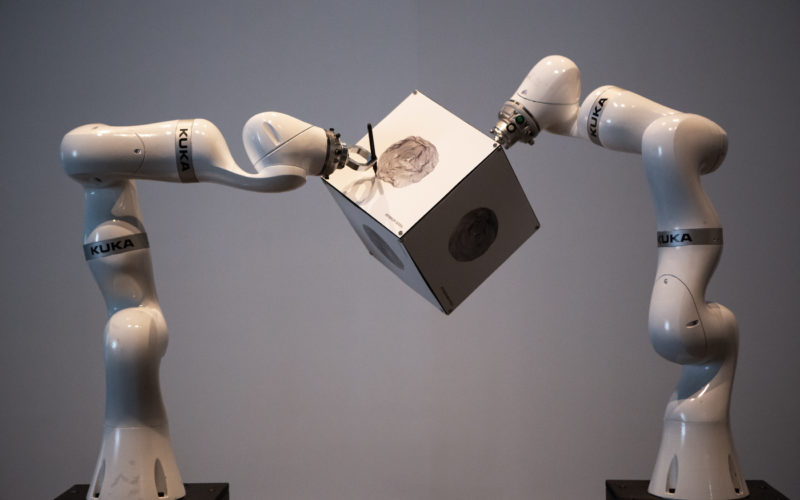 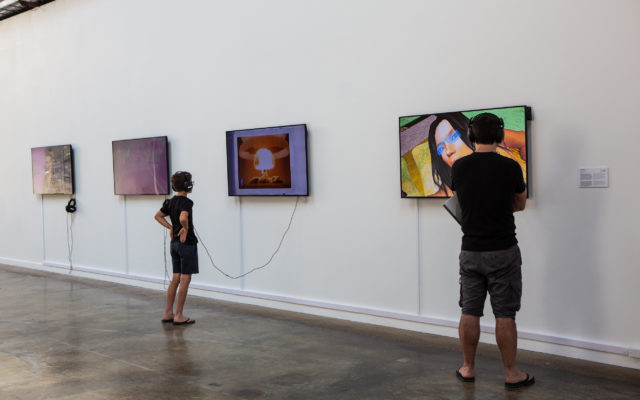 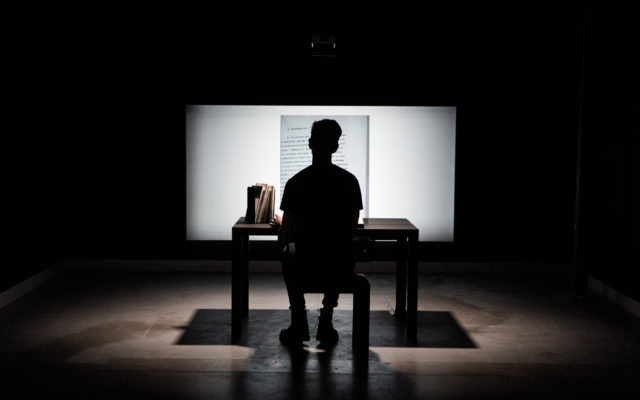 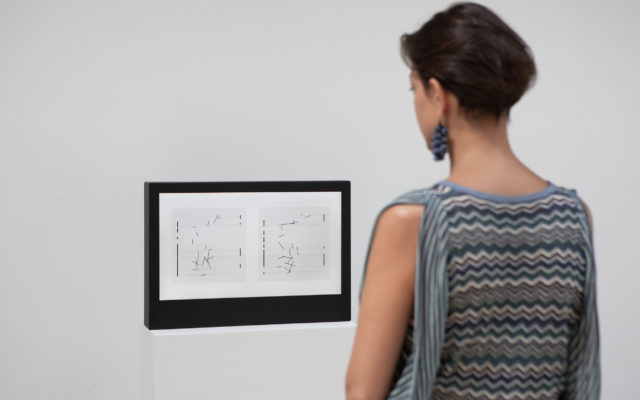 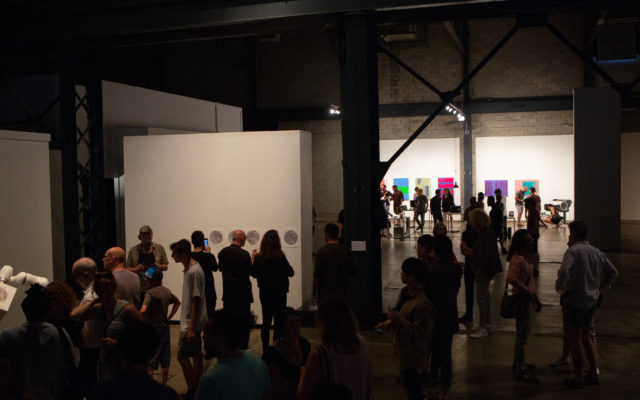 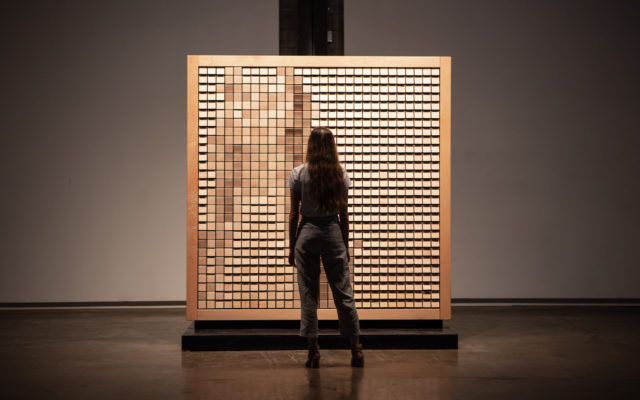 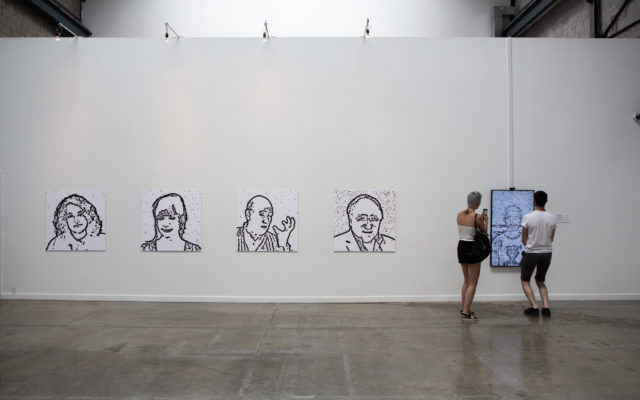 ↑ Space to breathe: BIAN was held at the expansive Arsenale Contemporary Art – and spills over (approximately) fifty thousand square feet; we’re used to seeing digital art in cramped confines, so when works have dedicated rooms or large swaths of space to themselves, it really heightens the experience of the viewer

BIAN’s program served up many exciting new discoveries, as well. Collaboratively produced by teamVOID & Youngkak Cho, Over the Air is an exquisite robot drawing machine slash environmental visualization performance – it’s a bit hard to peg down. In the installation, two industrial robot arms collaborate: one yields a stylus, the other steadies a cube, and the former slowly traces an air quality map on a face of the cube. The slow rendering offers a deliberate, almost meditative counterpoint to the immediacy and ‘instant access’ of screen-based visualizations, and completed drawings are arranged nearby in a quasi-gallery for inspection. Of the many strong works in the show this was quite a standout – it attracted an admiring crowd each and every time it set to work on a new drawing.

Also noteworthy: Adam Basanta’s mixed media installation All Weʼd Ever Need is One Another, in which a pair of scanners pointed at each other are locked in an endless feedback loop of self-referential scanning and – the installation is billed as an ‘art factory’ – new manipulations of their output are printed, registering local light conditions. The description sounds like cool formalism but the compositions (and hues) produced are warm, and vital. 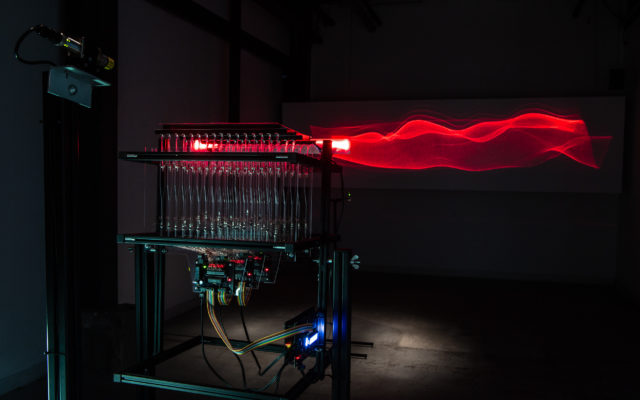 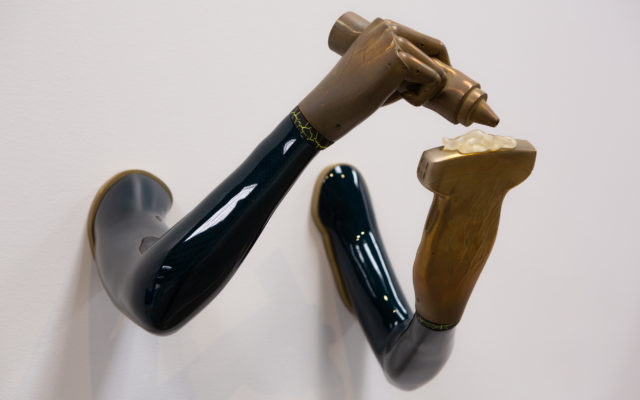 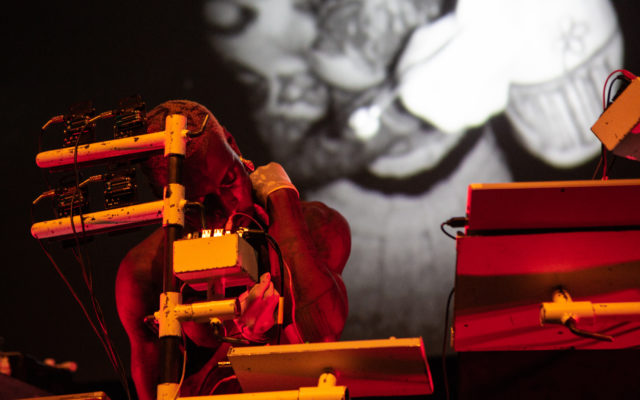 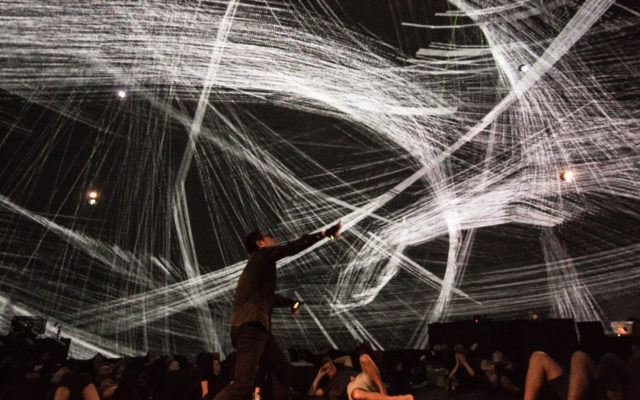 Beyond the expansive show at Arsenale Contemporary Art, BIAN also featured an immersive projection program at the Satosphere, satellite exhibitions at several affiliated galleries, the International Marketplace for the Digital Arts (MIAN, in which CAN participated) and a pair of book launches. Abundance is always welcomed in the digital arts – where scarcity of both space and resources are often status quo. While we’re quite satiated by our recent visit, CAN is curious what the shape of the next edition of the biennial will be – a fifth edition seems about the moment to really sharpen curatorial focus and refine the (already impressive) platform that’s been developed. Speculation aside, penciling a trip to Montreal into your 2020 summer calendar would not be a bad idea. 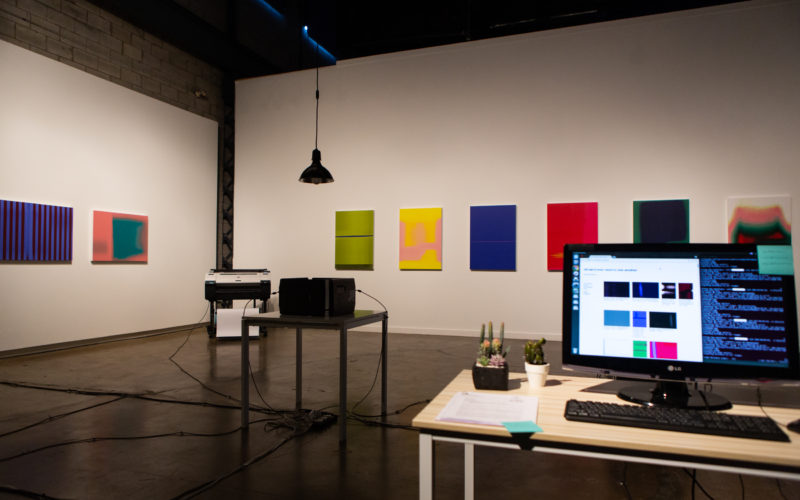 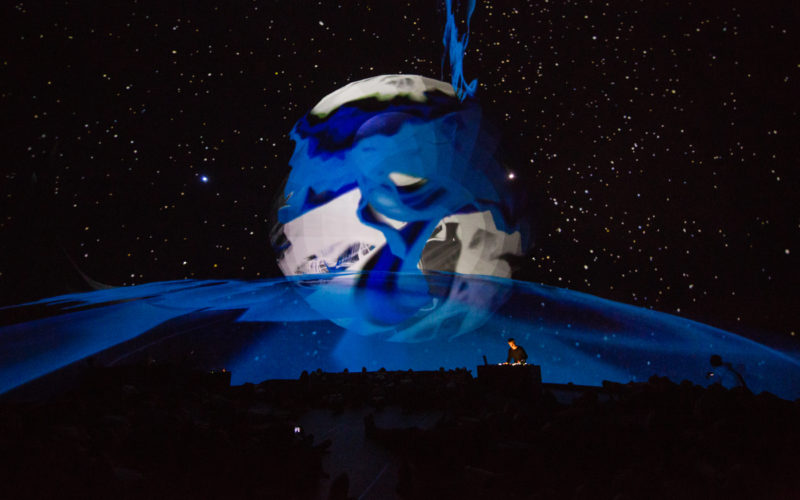 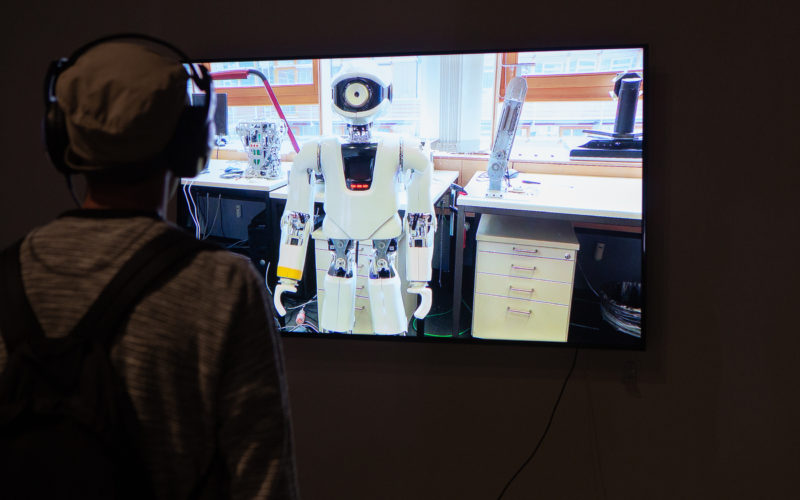 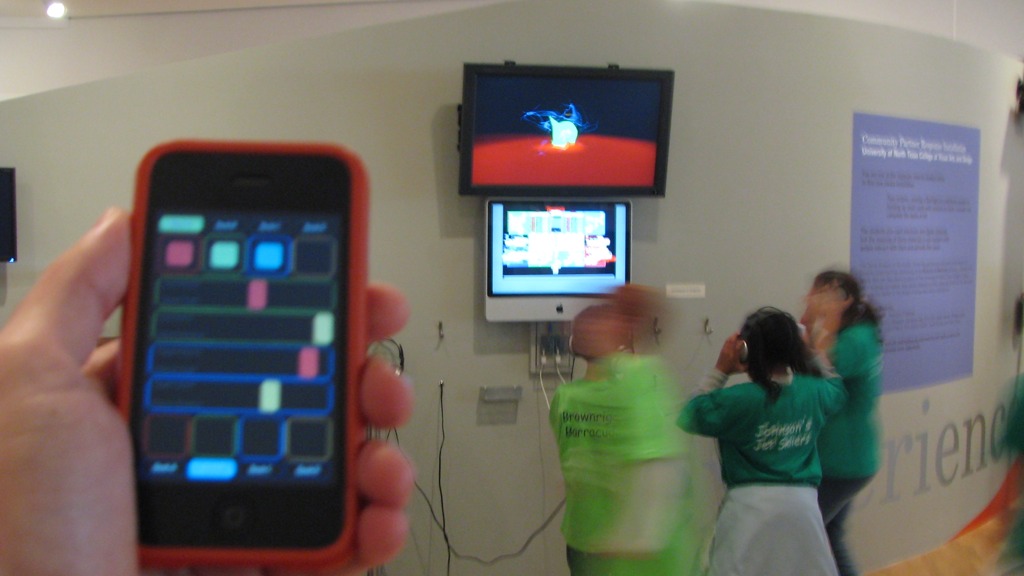