On April 11–13th MUTEK Montréal presents the 4th edition of MUTEK_IMG, their offshoot festival focused on digital creation. We are organizing five panels within this year’s program, that bring together leading artists and thinkers to consider pressing aesthetic and sociopolitical questions.

We’ve been dialed into MUTEK’s spin-off festival, MUTEK_IMG since it launched in 2015. Given how much they’ve catalyzed the audiovisual performance space at MUTEK over its (almost) two decade run, we’ve watched with enthusiasm as they’ve developed a parallel platform for exploring VR, projection mapping and scenography, hacktivism, and the broader digital art milieu; and with this fourth edition of MUTEK_IMG it’s clear that they are really beginning to hit stride with this second venture. CAN/HOLO was invited to curate part of the event’s symposium, and we’ve reached across our network to tap into the expertise of a diverse, multidisciplinary cast of artists, designers, curators, and critics.

Our five panels broadly address immersive experiences and speculative practice, while underscoring critical issues in digital culture. Each one can be distilled down to a question: What role do artists and designers play in shaping our vision of the future? Where are the ‘unknown unknowns’ of digital aesthetics, and how do we find them? How do we design across space and stage to integrate bodies and interactive systems? In what ways have automation – from robots to machine learning – become essential elements within the artist’s toolkit? And, finally: How can digital art be used as ‘an antidote’ to help clear the pervasive haze of misinformation in our post-truth reality?

Each session will bring together a blend of artists and designers, curators and cultural producers, and critics and thinkers to share their work and collectively parse these big questions. Acting as a capstone to these sessions are two keynotes: speculative architect Liam Young will draw from his extensive globetrotting and catalogue how the future is leaking into the present, and Daito Manabe will speak about discrete figures, the latest collaborative performance devised by Rhizomatiks Research and the dance company ELEVENPLAY (the North American premiere of which is the crown jewel of the festival).

It wouldn’t be MUTEK without some techno. British producer Daniel Avery will lay down some beats at the closing party, showcasing material from his forthcoming album Song for Alpha.
[/two_columns_one] [two_columns_one_last]

Semi-finalists in an international competition present their projection mapping proposals to the public (and a jury) in the Quartier des Spectacles. Three finalists will be selected (and funded!) to develop their proposals further, and present them at MAPP_MTL this fall.

A German-Canadian exchange that teams up thinkers and veteran producers to prototype new VR works, share their explorations, and leverage the assembled brain trust to present on the state of the medium.
[/two_columns_one_last] [divider]

MUTEK_IMG (largely) takes place at The Phi Centre and while an RSVP is required to attend the symposium events,
everything is free save the performances (get tickets for Rhizomatiks Research x ELEVENPLAY ASAP though, it will sell out). Click through below to examine the program in more detail – we hope you can join us in Montréal this April! 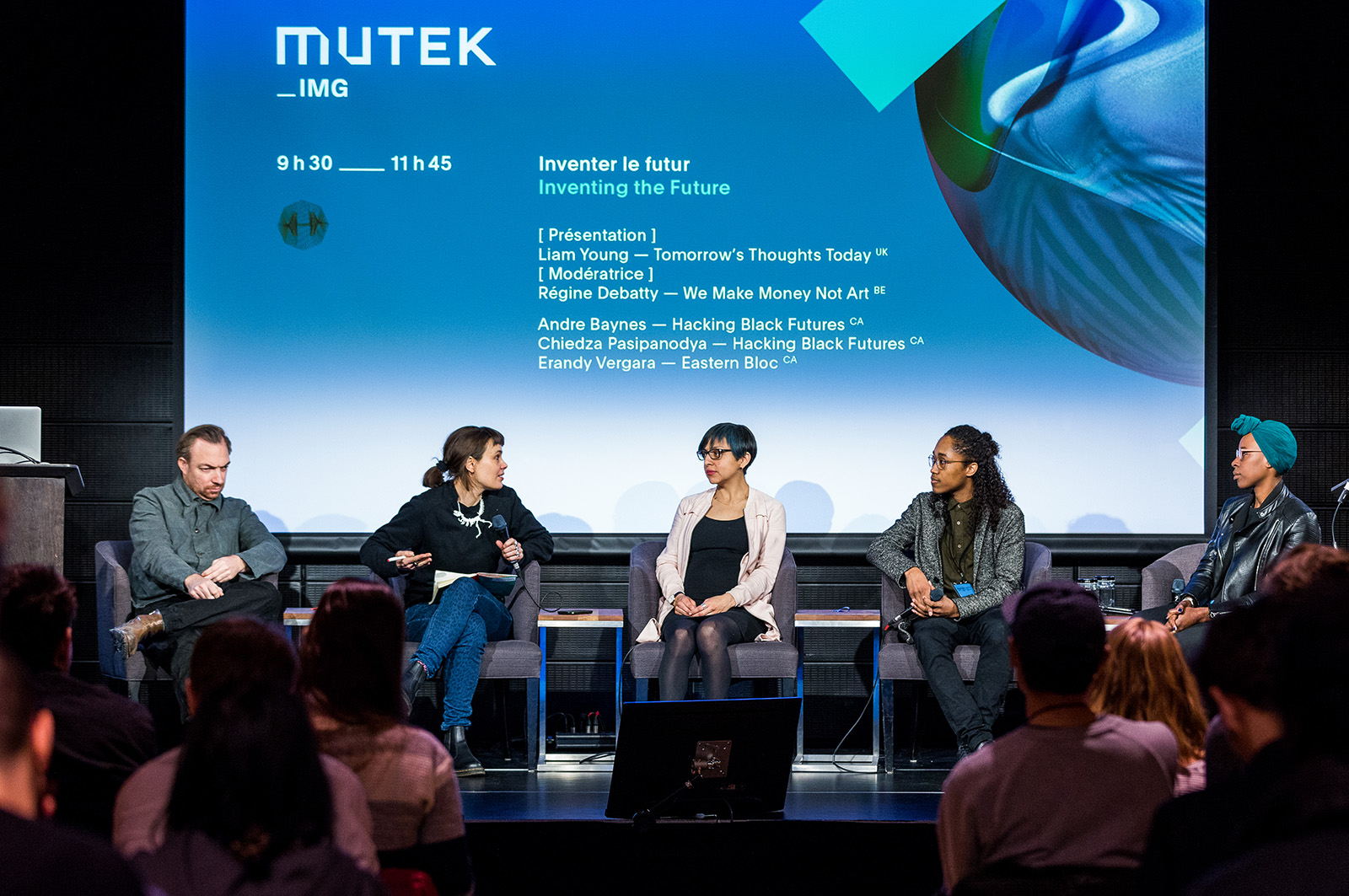 Inventing the Future at MUTEK_IMG

It was just three weeks ago we were in Montréal for the 4th edition of MUTEK_IMG, MUTEK’s forum on digital creation. Invited to contribute to its symposium, we curated five panels. In this post-festival report, we share some highlights.